Looking at the changing pattern of recoveries throughout domestic economic history, it is clear that there is a correlation between the level of monetarist intrusion and the shape of recovery (I would go so far as to claim a causative relationship, but at the very least there is no denying some kind of link). That observation extends to the 1930’s as well, but perhaps more importantly it shows just how many shocking and relevant similarities there are between the recovery after the Great Recession and that which followed the Great Depression. The decade of the 1930’s was rife with monetary intrusion and government meddling, so it fits right within the characteristics that define our current circumstances.

The very nature of that is driven by orthodox scholarship of the Great Depression collapse, with so much of what passes for monetary policy now being born from later lessons gleaned from overflowing and devoted scholarship to that period. It is a very curious result, however, in that there is very little said about the decade prior, almost as if the Crash of ’29 and the economic calamity that followed were entirely isolated in a system of otherwise total tranquility. There is something very incongruous about that starting point, not the least of which because you never see such disparity – systems don’t just operate perfectly and then suddenly fail catastrophically.

Yet, that is exactly the narrative that surrounds the Great Depression. The conspicuous incuriosity of the 1920’s follows from the orthodox notion that the decade leading up to the disaster was a kind of “golden age”, where the fusion of the first strains of “modernism” were finally allowed a full seat at the policy table – and not just a full place, either, but taking on a leading role.

There is much to be learned from a full examination of the 1920’s, not the least of which is the evolution of theory and how it moved from there to actual practice. On Friday, I wrote about an obscure Dutch economist that floated a then-radical idea for going beyond the gold standard’s “confounding” restraint at the end of World War I and into the Depression of 1921. The ter Meulen Plan was enthusiastically embraced by Commerce Secretary Herbert Hoover and represented a huge change between operational monetary theory that came before and certainly what came after.

For the orthodoxists, that was the story of the 1920’s and all its assumed glory. Central authorities finally had the opportunity, as so many currencies left the gold standard during the war, to exercise real control to get beyond the “cross of gold.” Looking back on it, mainstream economists view it in much the same manner as the Great “Moderation” of the 1980’s and 1990’s under the same narrow measure of “inflation.” Because consumer inflation was mild and tame by comparison to preceding history, including a massive inflation at the end of the 1910’s (just like the Great Inflation that preceded the 1980’s), it serves as evidence of the “golden age” not just of economic advancement but also of central control through central banking.

But that sets up the central absurdity at the heart of the matter – how such central banking prowess could suddenly turn into the Keystone Cops. That is how the collapse of the Great Depression is explained, particularly in the monetarist version. The Fed, which to that point had been supposedly divine, suddenly blundered by “tightening” monetary policy after the stock market crash.

The real blame, for this version, falls on the gold standard itself. Part of the reason for the mistakes of central bank policies is that they allegedly were forced by the gold standard during the collapse to project panic and irrationality, which, in former Chairman Bernanke’s (the great Great Depression scholar) mind meant a debilitating inflexibility that severely restrained monetary alternatives to properly deal with illiquidity before it went “too far.” That is the lesson that monetarists, some decades after the events, took to heart and which forms the very basis of ZIRP, QE and now negative nominal interest rates in Europe.

If your view of history begins with the stock market crash in 1929, this makes sense. Thinking that what came before the crash was generally a “golden age” severely limits the possibilities for examination of pathology. Among the primary lines of inquiry, indeed the very starting point, would be this seeming paradox – in which the premise is that monetary policy had gained freedom from the gold standard during the 1920’s and created an economic utopia of low inflation, but then suddenly was handcuffed by the same gold standard on the downside to global deflationary disaster. The gold standard was no problem at all in the 1920’s, but a massive impediment as soon as Black Tuesday struck?

That marks the biggest hole in the orthodox theory, namely where did the stock bubble come from? Again, in the golden age explanation it was the common rubes, the little guy, that misallocated resources and bought into a fantasy of Wall Street hypocrisy. But none of that extremely limited conjecture explains this: 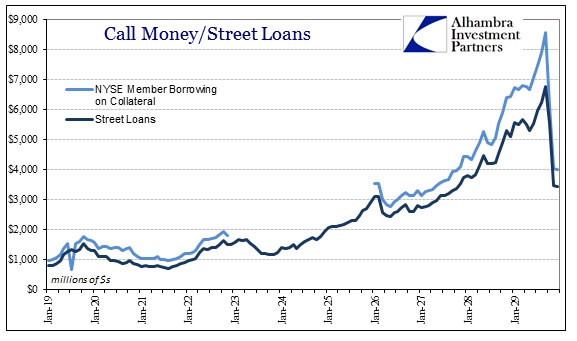 The chart above is more than just a fly in the ointment, it obliterates the entire premise of the orthodox explanation for the Great Depression. That includes the assumed “golden age” of central bank activism, as it connects not just monetary theory and operations but also the pace and scale of debt which led to Fisher’s supposed paradox. The call market was deeply intertwined with stock prices, something that used to be common wisdom before the modern monetarists took hold of the history. And call money was that era’s federal funds market – the primary wholesale money market, going back deep into the 19th century, that offered a direct channel from banking and “money” creation to brokers and asset prices.

The Federal Reserve itself, in the 1940’s, described the call money market (also known as Street loans) this way:

The market for brokers’ loans, as it is generally conceived, is centered around the New York Stock Exchange. Although some of these loans grow out of a customer relationship between banks as lenders and brokers and dealers as borrowers, the majority are made in the open market on a strictly impersonal basis. The market in which these loans are made was until recent years the most active and the most sensitive of the money markets of the country. It was the market where surplus funds of banks, and sometimes of other lenders, could generally be readily placed or from which funds could be quickly withdrawn when needed. Because of the dominance of call loans, the branch of the money market dealing in brokers’ loans has been frequently designated as the call money market. [emphasis added]

What has been lost to history, in favor of generic and highly stylized models, is this central nexus of banking system operations. Because of the correspondent system which grew up out of the 1800’s, there was a robust interbank market for bank deposits. Country banks held balances with city banks, called correspondent accounts, so that city banks would clear and process payments on their behalf. City banks then held deposit accounts with central reserve city banks that cleared larger balances and conducted payments processing on a wholesale basis. That meant a lot of “idle” funds waiting around for nothing more than processing.

Thus interbank lending was mostly a term affair, except call money. Because a corresponding agent or bank might need to draw down a correspondent account to pay for an item presented for payment (a draft or check), most excess funds were placed in the call market because any arrangements were overnight and thus highly liquid.

Since nearly all bank assets outside the central reserve city banks in the United States at that time were loans, the borrowers in the call market were almost exclusively stock brokers and dealers. This was an ideal marriage because brokers were pledging stocks as collateral for the loans. Since they were the institutions dealing in highly liquid securities they could term their borrowings down all the way to overnight (unlike a loan, if your overnight funding is “called” the next day you can easily liquidate the stock position to obtain funds for repayment; so can your lender if the collateral is seized on default). Thus, the larger the whole nature of excess reserves, the more “money” available in the call market, which brokers and dealers used to finance lending cash for investors to buy equities (and other securities).

The nature of the call market in the latter half of the 1920’s, though, shows a lot more than just the manic exuberance of stock investors. It connects the whole system of the 1920’s, flexibility and all – interbank markets, gold flows, Federal Reserve policy and global monetarism. None of it lends itself to the easy interpretation of a central bank golden age, but rather we see the same patterns of theory and operation that were again repeated during the asset bubbles in our own recent history. In trying to manage and control through targeting, central banks stopped looking at where those efforts were misallocating and creating huge and dangerous distortions. You cannot hold one variable constant and expect the rest of the complex system to simply obey, yet that is the interpretation whereby gold is given prime culpability.