Forget All The ‘Noise’, This Is Why the Economy Has Been Sinking

Forget All The ‘Noise’, This Is Why the Economy Has Been Sinking

The balance to all the policy of “good feelings” is the actual ability to spend. Orthodox economics resides on the demand side, which explains much of these persistent problems, yet there is a low degree of realization about getting from A to B. As I said earlier, modern central banks are about manipulating expectations, really feelings, in order to control economic spending. The idea is that spending begets spending, the pump priming where manipulated emotion leads to great things.

For all the convoluted theories and mathematics, though, the economic system is far too complex to compress into such platitudes. Without a solid income base there simply can be no recovery. A far more contoured and nuanced understanding of the economy is needed to even begin to engage in such central planning, but that does not stop the accumulated statistics of three generations of economists from trying to do so anyway.

Whatever you might think of “good feelings” and rational expectations theory, none of it matters without a monetary source. As much as wages and income were actually unsatisfactory in the 2000’s, there was at least a credit option for supplementing income toward spending (which, in just plain common sense, is actually a negative in the long run). There is no such widespread outlet now, regardless of what looks like very recent desperation. That undercuts the assumed transmission mechanism for all these manipulated expectations.

Despite what the Establishment Survey may attribute to a healthier economic “cycle”, wages are actually very much depressed and becoming more so. There has yet been a revisit of the lackluster level of the housing bubble, let alone a full-fledged rebound. While wage growth is positive, that does not account for all the factors that make up actual consumer spending (far more potent than emotion). 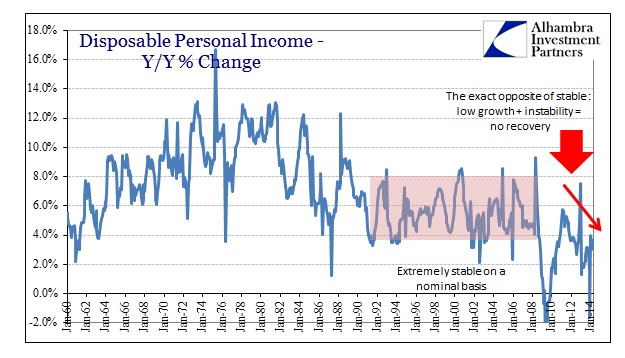 Part of that relates to Milton Friedman’s permanent income hypothesis, whereby wage growth during this recovery period has not only lagged but has been depressingly spotty and volatile. That leaves an untoward and overly emphasized role for price pressures (not the official inflation rate, but the actual cost of living as it exists in comparison to income). 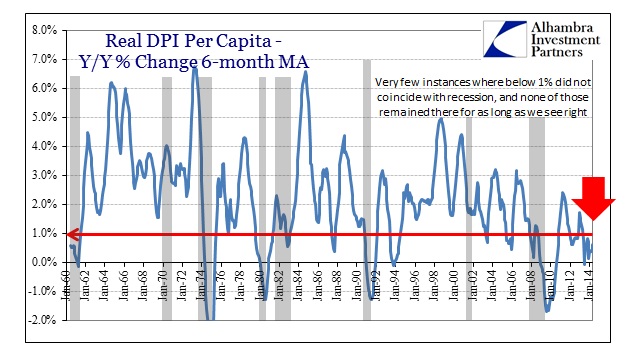 The depression in real DPI per capita after the middle of last year goes a long way toward explaining why the economy may have contracted at a recessionary 3% in the first quarter. Winter storms may appeal to the sunshine disposition of rational expectations theory, but consumers really respond to what’s in their wallet (particularly if that includes a maxed out Capital One card). 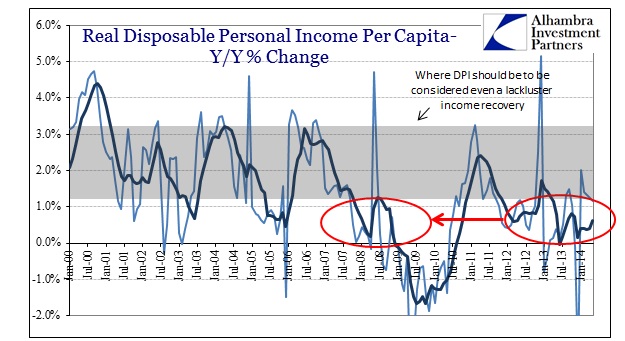 No matter what the BLS estimates in terms of the beancount number of jobs and payrolls, the actual dollar figures of pay are simply not enough to carry forward momentum. That has been the case consistently, unfortunately, despite any and all monetary intrusions. A weakening economy really isn’t that hard to believe or see given the decrepit state of true wealth in the US (the basis for all actual and true wealth is the free market exchange of labor for income in a productive endeavor – less exchange means less actual wealth, despite reflation in paper assets).