WSJ: Spring Without Much Bounce

WSJ: Spring Without Much Bounce

You hear it repeated incessantly that the US economy is consumer-driven, and perhaps it is in some very narrow aspects. The idea, however, that consumption accounts for 70% of the economy is false, a figure derived from GDP calculations that include, among other artificial creations, an imputation for homeowner rent equivalence (BEA estimates how much a homeowner might pay themselves in rent; this single made up line amounts to more than $1 trillion of GDP!).

All that being said, consumption is still important as a symptom of a healthy economic system. Where retail spending rose significantly during the 1990’s and 2000’s, far too much was being driven by debt accumulation rather than earned income. Therefore, what we want to see is retail spending growing robustly alongside earned income. The savings rate under such conditions would preferably remain “neutral”, that is, not toying with one extreme or another as we saw during the height of the housing bubble (where it was initially reported, before being revised away several times, that there was actually a 0% rate in the middle of 2005).

Since 2012, consumer spending figures have been declining at the same time as the savings rate, indicating the opposite of economic health. Again, as a symptom of production and true wealth, these results give off the idea of an economy growing weaker despite whatever malingering calculations can be arrived at via linear regression.

To put that into context, there have been inordinate contradictions offered to explain all this. We have heard so much of the mainstream commentary on the recessionary first quarter as nothing more than cold weather or health care abberations. Those might be factors, but an economy in the midst of healthy growth would not slump so badly even with modest drags – in fact, that is what a healthy economy actually means, a system that can continue to advance despite all manner of “unexpected” deficiencies.

Among those most heavily advancing that weather excuse has been Thompson/Reuters, the information provider that tracks retail figures via its SSSI (Same Store Sales Index). But the winter of 2013 was also quite cold and, well, wintry, but Thompson/Reuters had this to say about January 2013:

The nationwide cold snap during January helped retailers unload winter merchandise, such as coats and jackets. While department stores and apparel retailers were selling many of these items at a discount in order to clear their shelves ahead of the arrival of spring merchandise, those discounts weren’t as heavy as they would have been in a month’s time.

It wasn’t quite so good as all that, as the quarterly SSSI for Q1 2013 dropped to only 0.7%, far below the 3.4% the index gained in Q1 2012. Maybe Thompson/Reuters learned from the experience and now sees winter not as a retailer’s best friend but its direst of opponents. By May of last year, and particular into June and July, the return of warm weather bolstered the outlook of the analysts:

Rising temperatures in May brought a foretaste of summer and shoppers responded. The month had it all – nice weather, holidays and retail discounting. The Thomson Reuters Same Store Sales (SSS) Index actual result for May 2013 showed a strong gain of 4.8%, above the final estimate of 3.7%.

But that optimism, which started to take on more than a little taint of economic cheerleading, ended to no lasting avail. The spring quarter was not as bad as the winter, again the soft economic bigotry of low expectations, but nothing like actual growth that was expected of a QE-heavy influence:

Retailers are expected to post a 1.9% gain overall and an increase of 2.4% excluding Walmart, according to a preview of the SSS index. Both estimates come in below the 3% level that represents healthy consumer sales.

Which brings us to 2014; and the winter that nobody saw coming. At beginning of January, expectations were for a rebound after the very disappointing Christmas season (which nobody saw coming). Instead, what retailers experienced was nothing short of disaster. Yet, we are supposed to ignore all that, an extended run of bad retailing, and simply expect a return to full economic course.

Now, firmly implanted in mother nature’s warmth, the talk is one more time of consumer resilience now that snowy roads are no longer an impediment to modern and advanced conveyance.

To quote a well-known song, June was “bustin’ out all over” with sunny weather driving shoppers to the malls and stores responding with promotional discounts. The Thomson Reuters Same Store Sales Index is expected to show a gain of 4.8% for June 2014, an improvement over the 3.8% gain a year ago.

It seems a carbon copy of last year’s incessant and ultimately misplaced optimism, except that buried within the very same article is the real “news”:

In all this sunshine and persistent cheering of predicted economic fortunes, led in whole by the folks at Thompson/Reuters, their own index of same store sales is forecast (which always is on the high side) to not even match last year’s desperate disappointment, let alone anything like the “3% level that represents healthy consumer sales.”

At the Wall Street Journal, at least, there is less sugar to go along with what is growing into a widespread realization about the consumer, and thus the economy.

Results at retailers haven’t been uniformly bad this spring. But there are enough negatives to shake earlier hopes that shoppers would whip out their wallets and resume shopping after the long, tough winter. The mixed showing continues to cloud the optimism arising from stronger job growth and rising consumer confidence.

No one in the mainstream will come out and say it because it violates everything the orthodoxy has proclaimed, but the contradictions between the economy and the purported job growth are enormous and growing too much to be simply ignored or dismissed. But this kind of divergence is actually somewhat typical, at least around cycle peaks. That is why revisions are so drastic once the gathering of orthodoxists at the NBER finally make a belated determination.

Some of that is no doubt due to changing consumer trends, most definitely the gaining preference to shop via device rather than in person. But, like the box office, I think it is a very big mistake to overlook the macro climate in all of this. These are actual dollar figures rather than imputations and adjusted regressions, and taken together as a whole they paint a very dire picture of the state of consumerism right now.

To put it all in perspective, that same WSJ article actually titled their graphic to capture what continues to be defiance of cheerleading and permanent optimism, weather or not: 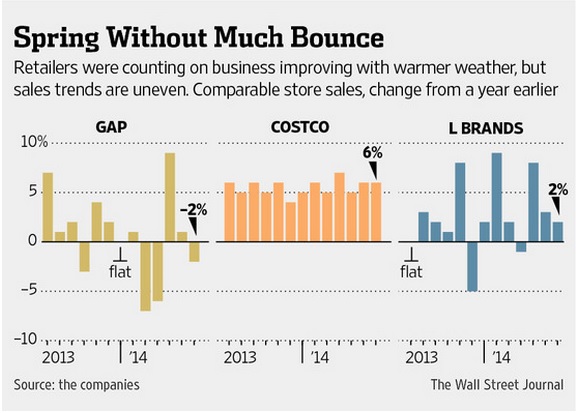