What An ‘Absence of Meaning’ Means

What An ‘Absence of Meaning’ Means

Henry Hazlitt once wrote that, “it is often sadly remarked that the bad economists present their errors to the public better than the good economists present their truths.” I have come to wonder how far that might have penetrated, disabling so many of the tools in which any “good” economists, or even investors, may use to act. Without the free flow of opinion, through traded positions, the price discovery mechanisms that foster sufficient economic efficiency is disabled or even obliterated. Without price discovery and efficiency there is no way forward to reach sustainable economic growth.

In fact, a persisting term of inefficiency might see an unstable economy lurching from one form of dysfunction to another, or what might fairly be called by the open-minded disposed toward common sense as a continuous bubble cycle. When I look at what has become of so many parts of the credit system, including funding markets, I cannot help but think back to exactly this disabling process.

Volatility is almost universally derided as a negative side effect, but that is only a narrow deconstruction of a true marketplace. Sure, nobody likes a highly negative event where a broad sector gets pummeled by bad pricing, but that isn’t necessarily volatility. In fact, a healthy market with healthy price movements will be volatile precisely because of the laws of complex systems. It is only human, or more precisely agency or authoritative, intrusions that lead to “flatness.”

What I mean goes well beyond just complacency, a common complaint that has surfaced even among the central planners recently. That is but one form of this lack of volatility, and perhaps highlights the deficiency in the word itself. The limitations of the current vernacular seem to be effective at this juncture, where even a lack of volatility under more “normal” circumstances would be instructive toward a meaningful analysis. What we see here is, again, not just complacency but a total absence of meaning. 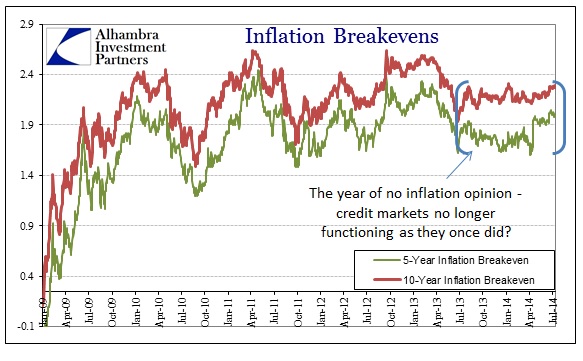 There is absolutely nothing contained in the track of inflation breakevens shown above by way of informing the observer about inflation. The lack of volatility as strictly defined would apply equally to the upward and downward trends contained of themselves, as when breakevens moved sharply but steadily higher after Bernanke rumored himself into QE2 at Jackson Hole in August 2010. The lack of volatility there meant that these “markets” were expecting higher “inflation” once his jawboning turned toward operational action, but at least at that point there was some significance in that lack of volatility.

What we have seen here since the major taper rumor selloff in the middle of last year is nothing short of extraordinary. These markets are persisting in being nothing like markets. And this is not some seven-day aberration to be set aside like a summer holiday, it has now been drawn out more than a full calendar turn. How can it be that inflation trading has done absolutely nothing, with all that has gone on in the interim, for more than an entire year?

The same applies, though in far less of a continuous period, in other vital sectors of the monetary system. We can add swaps trading to that list of total absence of meaning, though I would hesitate to use the word “total.” There have been fleeting glimpses of meaning, particularly around May 29 and Janet Yellen’s first clumsy appearance, but in the broader sense the flatline in swap spreads is akin to inflation trading. And IR swaps are not some minor market like TIPS. 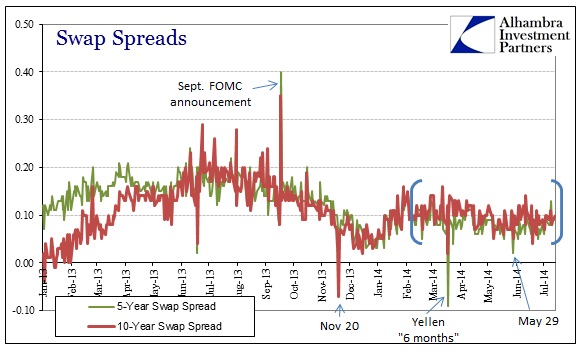 The close relationship between swaps and eurodollars, for example, transfers some of that absence of meaning across various facets of monetary function. In eurodollars, as I noted this morning, the lack of volatility is irregularly noted in futures short of the middle of 2017, or inside the “policy window.”

There is more than a little of this that contradicts, and convincingly, the idea of market efficiency. Are we to believe that inflation conditions have not changed at all in the space of twelve months, with everything that has transpired? That is exactly what the market, if it were even weakly efficient, is supposedly saying.

Which brings us to the idea of stock prices. If TIPS trading, or swaps and eurodollars, have been “deprogrammed” or even disabled by whatever process is paralyzing trading opinions then why not stock prices too. After all, there is a similar straight line attached to everything from the S&P 500 to the Russell 2000 (though in differentials to some of those, as parabolic is another form of a straight line, a logarithmic linear formation). In other words, the lack of volatility, with everything mostly trending in tight bands upward toward 45 degrees, in stocks is not necessarily the discounting mechanism of expectations toward the future, but rather the breakdown of “markets” into discrete packets of “bad economists present their errors.”

Again, as chaos theory shows, regularity such as this doesn’t just betray the idea of a true market, it proves otherwise. A marketplace is one in which the “jagged edges” of the real world intrude in both big and small ways. The very lack of volatility, or as I have described it, the conspicuous absence of meaning, is axiomatically a symptom of a complex system being overcome and mutated toward something more artificial. Since complex systems are so very sensitive to initial conditions, the only way to reproduce such meaninglessness is to destroy all such sensitivity – the very discounting that market efficiency proponents see in current prices.

Hazlitt also wrote, in close proximity to the above quote, that the “bad economists” and their errors are almost always intentional. These purposeful intrusions are useful means to an end, and those that wield them,

“are speaking only of the immediate effect of a proposed policy or its effect upon a single group. As far as they go they may often be right. In these cases the answer consists in showing that the proposed policy would also have longer and less desirable effects, or that it could benefit one group only at the expense of all other groups.”

In searching for a convoluted explanation as to why the US and global economy may have suddenly and unpredictably moved toward a lower growth trajectory, wholly or at least mostly immune to traditional monetary “medicine”, the orthodoxy has gone to pained lengths, torturing logic and sense even, to avoid coming to terms with this more obvious explanation. Meaningless markets are an impediment to efficiency, which is a total roadblock upon reaching sustainable growth. The end result is as Hazlitt knew almost eighty years ago, that monetary policy is not neutral in the long run as it so often benefits only one group at the expense of everyone else. That is no way to create a sustainable system, but rather an unstable system that is unable to perform as expected (including by all those elegant regression equations).

Whether it is TIPS, swaps, eurodollars or even stocks, the straight lines and regularity with which they all perform lately is the very obvious symptom of what is awry, not the engineering of success. And it certainly contradicts both market efficiency as well as, more importantly, monetary neutrality.