In light of second quarter GDP’s imminent release and the explosion of commentary it will undoubtedly create, I thought it useful to promote a better context that includes all pertinent variables of analysis and judgment. As I said earlier today on CNBC with Rick Santelli, it is often overlooked that the US economy has been undergoing “stimulus” courses for just shy of seven years. On September 18, 2007, the Federal Reserve reduced its target for the federal funds rate by a hefty 50 bps. They thought it was appropriate given the “irregularities” in funding markets that had “suddenly” appeared early that August. Contradicting the “subprime is contained” narrative, the FOMC initiated the rate measure not just for financial purposes, but, in their own words:

Economic growth was moderate during the first half of the year, but the tightening of credit conditions has the potential to intensify the housing correction and to restrain economic growth more generally. Today’s action is intended to help forestall some of the adverse effects on the broader economy that might otherwise arise from the disruptions in financial markets and to promote moderate growth over time.

The key phrase I think demands highlight is, “promote moderate growth over time.” Since this was the first instigation of “stimulus”, it should be judged on exactly those terms. From Q4 2007 forward, GDP growth has averaged just 0.22% per quarter, or a wholly disgusting 0.90% SAAR. Foreseen or not, the Great Recession and its recovery has made a mockery of “stimulus”, and of all varieties.

But where the monetarists really escape accountability is in timing. For some reason, conventional opinion gives the Fed the benefit of the doubt about the occurrence of financial irregularities and thus everything downstream from them. The housing bubble came from somewhere, as did the dot-com bubble before it. Ben Bernanke was Time’s person of the year because it is simply assumed that monetary policy saved the US from a worse fate.

Even if that was the case, it has been entirely undone, and then some, by what has happened since. The net for the whole cycle is now negative, whether or not you believe Bernanke as a 2009 hero, as I will labor to illustrate below.

The current PR manufacturing has been using the labor market as a waypoint for monetary success despite the fact that it has taken 76 months just to “achieve” the last cycle peak (into which we are still 3.7 million full-time jobs below November 2007). That is not success at all, but rather further evidence of total failure. What is lost in the mix of renewed bubbles and bond market disruptions is that time is the biggest factor in all finance. Albert Einstein gets credit for the quote, though who knows where it actually came from, but the observation is mathematic in both its simplicity and power – compound interest is the most powerful force in the universe. That introduces, not unlike general relativity, time as a primary variable.

What that means in the context of a sluggish recovery, where “stimulus” is even partially ineffective, is that the more time it takes opportunity costs rise geometrically. I’m not just referring to the typical orthodox trope of labor losing skills, etc., but rather opportunity cost of not trying something else.

What follows is pure counterfactual for the sake of discussion. The primary argument in favor of all this monetarism in the context of the Great Recession cycle is that it at least kept the Great Recession from getting worse. However, if the “cost” of that assumed benefit is the recovery as it has been, then we might well re-examine the idea of time and compounding. In other words, maybe we should actually accept a worse contraction if it means a better recovery – the infamous symmetry of the “V.” 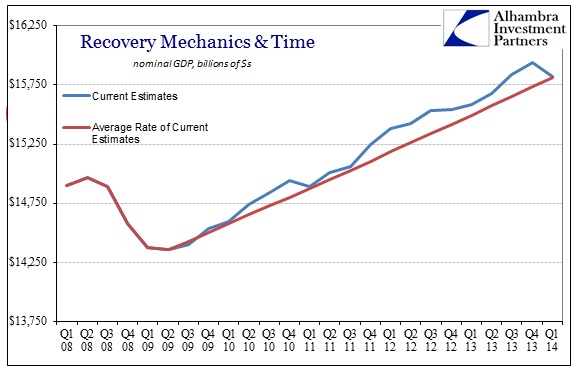 What is shown immediately above is the track of nominal GDP since the end of 2007, with the average recovery growth rate plotted to show that you end up in the same place regardless of factoring time when changes are very small. Normally, under a compounding regime, it is far better, given real world lumpiness, to gain larger growth earlier in the timeline.

For the sake of argument, we can assume a far worse contraction period, giving monetarism the benefit of the argument about effectiveness as some sort of economic cushioning (which I by no means believe actually happened – there really is no empirical or even philosophical reason to think “emergency” measures had any true benefit whatsoever, particularly given the Keystone cops nature of it all and its persistent failures in even the most basic of functions). 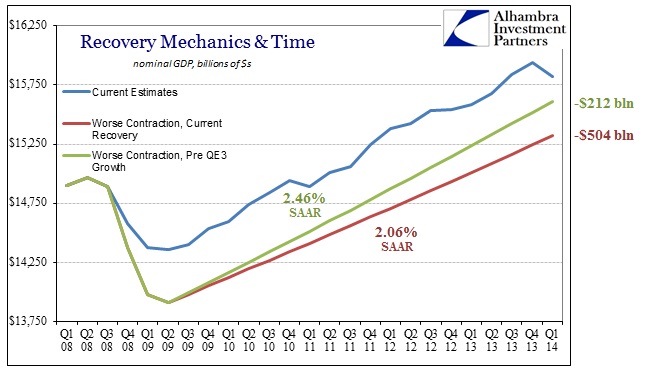 Under the recovery tracks shown above, mimicking what actually was “gained”, you can see that the “cushion” idea would seem to make sense. It would be much better to attempt to limit the downside if the upside is so much degraded. But compounding also becomes clear, as just a minor increase in the recovery growth rate, even given the much larger contraction, nearly closes the gap at the end (Q1 2014).

However, if we use historical growth rates from prior recoveries, it clearly shows that recovery rates are more meaningful across larger time spaces than the contraction. It’s not really that close in terms of comparison. 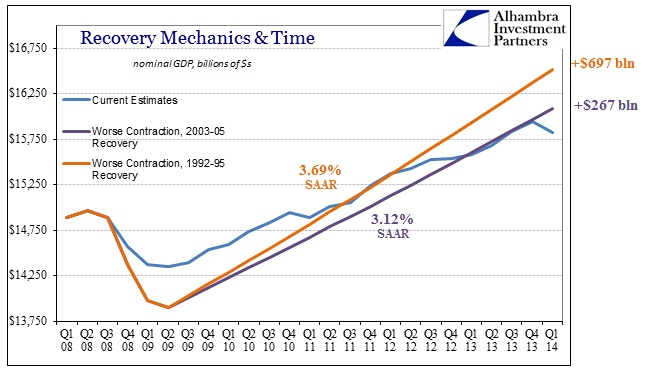 While the housing bubble’s inefficient and ultimately unsatisfying recovery matches the actual GDP trajectory, again despite a much larger contraction, by the middle of 2012, the 1992-95 recovery period surpasses the recent record in the middle of 2011 before ending up significantly above (which would only continue from here on). Given that scenario, it would seem more beneficial to take the worse contraction and with it a better recovery track.

If we use the recovery from the mid-1980’s, there is a wholly different scaling involved as compounding in growth becomes nearly unstoppable. 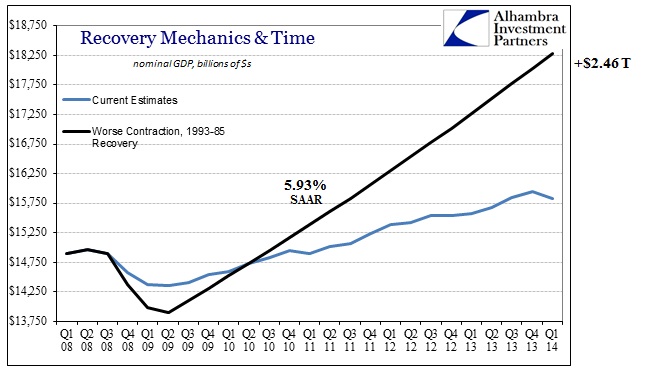 I am not by any means suggesting that the 1980’s growth rates are likely without so much monetarism, but rather I only mean to show the fallacy of conventional wisdom about the role of “stimulus.” If you believe monetary policy is effective in cushioning the dislocation on the way down, then you have to at least account for the lack of symmetry on the way back up. I doubt any othodoxists will connect the easy dots and see monetarism as a primary cause of that asymmetry in cycle, but unbiased observers must at least note the correlation, and then the possibilities that follow.

If that is indeed the case, and monetarism is downgrading the recovery, stretching it out further in time (a lower slope), then you have to assess that damage against the idea shown above – that it would be better to risk a bigger contraction at the outset and thus not disturb the recovery. In fact, that is exactly how the orthodox practitioners think about monetary policy, in terms of stretching out any cycle. The only deviation in the Great Recession was that they never believed it was possible to see such a massive downside force.

So why is it not possible to have both, the large contraction and the elongated cycle? To think that monetary policy is not having that same effect simply because the downswing was greater than modeled is beyond naïve. And that would lead you to at least entertain the idea that the scale of the contraction is actually secondary, and that perhaps the Fed might have been better off not trying to interfere in any of it.

Again, I don’t believe the recession would have been worse without the Fed, as much of what transpired took place without much regard to interest rates and childish appeals to psychology, but even if you do that may not matter in the long run. Ineffectiveness means exactly that. However, what follows from that in terms of the recovery is far, far worse. Let the economy take its own course, even if that means greater pain in the short run, as compounding over the longer term fixes that cyclical inadequacy. The bottom line is that “stimulus” failure has very real costs, and the longer it goes the worse it becomes.