Following up with some more detail on yesterday’s GDP euphoria, a closer examination reveals that not much has changed beneath the headline refiguring. Again, I highly doubt the 3.9% (plus some rounding) survives further estimations, but that really doesn’t much matter at this point. Whether it ultimately arrives at 5% or 2% won’t change the trends that are embedded beneath the narrative (which are far more consistent with the first quarter than the second). 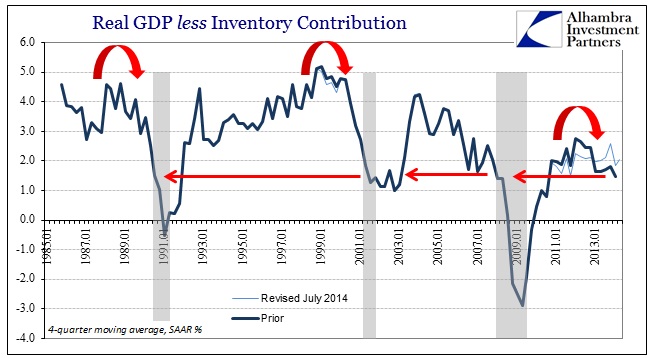 Afterward, what looked like a classic peak and descent is now a weirdly stable straight line (as if TIPS trading has been brought to the BEA’s statistical surveys). It is beyond odd to see such a low volatility period; even when presented as a 4-quarter moving average it is nothing like historical experience. 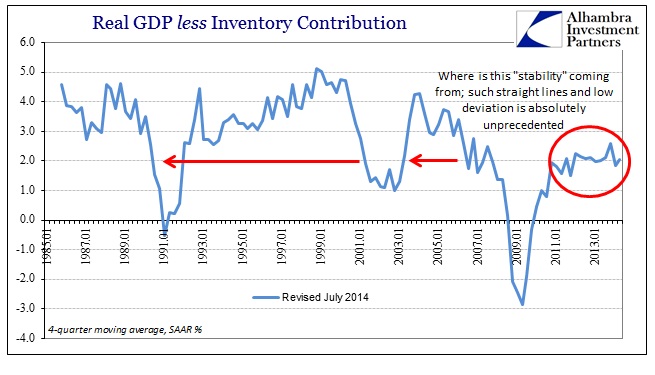 Moving beyond the headlines and into PCE, or what passes for private, non-business end demand in the GDP accounts, the revisions, however, had little impact on the overall trend. The peak and descent remain intact though revised estimates of consumption are now much lower in recent years. 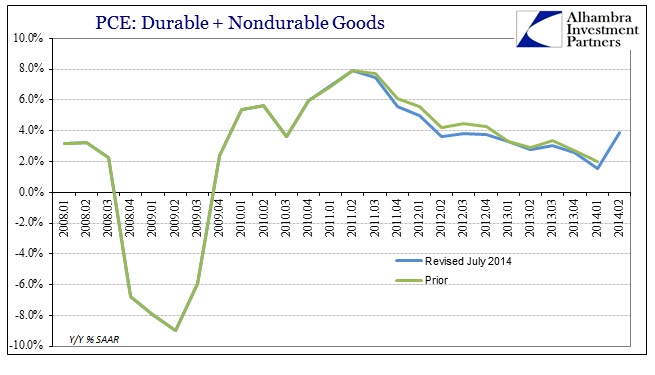 I am only counting goods here, as services contain far too many imputations (owner’s equivalent rent being the largest and most offending) for what I consider a pure and useful analysis of demand (and thus a derivation of production and true wealth). As with almost everything else, there is the 2012 slowdown without any respite. 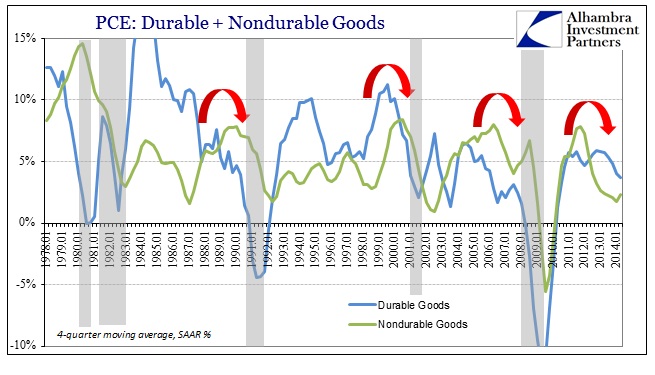 In fact, in wider context, spending on goods still looks very cyclical with the noticeable drop (pre- and post-revision) in nondurable goods all but ignored where it should be headlined. It is highly unusual to see demand for nondurable goods drop to such a low level, even more so considering the cyclical pattern that it is contained within.

That seems to offer more relevant context for recent inventory derivatives, particularly the buildup and where it may ultimately cease. No matter the variations in headline GDP, statistical or real, US consumers are not moving in the direction of the revised accounting, in fact still struggling in opposition to the escape velocity expectations.

What that means is that revisions were mostly surface contusions that indeed changed and altered the main narrative about the economy (lower growth in 2011-12 that is now “accelerating”) but nothing really beyond that. At the same time, however, the same GDP figures contradictorily preserve the basis for continued descent and cyclical reality. That applies equally to GDP with and without inventory, but it should be far more concerning in the inventory mini-cycle that has captured and demands marginal changes. Without a full inflection upward in consumption (struggles that derive from wages and the immense disparities there), again, the final figure on second quarter GDP estimations will matter about as much as the second quarter of 2008 (similarly situated).

Even that may not be enough for the mythical recovery that is now years behind. A cyclical inflection would certainly help in that direction, but given that current circumstances are so far behind where they “should” be, any upward swing in activity needs to be so robust as to be of historical proportions just to re-attain the prior trend (which is now so far away that it isn’t even on the same scale anymore).

Even where that narrative has been changed by recent revisions, suiting the orthodox view, that does little in historical context (which certainly fits most people’s actual experience, other than the concentrated asset inflation redistributionists) to alter the judgment against policies that have been carried out intended to “stimulate” exactly a return to “potential”, or at least what most people would define as a truly satisfying economic condition. Instead, we see “mysterious” headwinds that plague the economy, “somehow” enforcing what looks like a hard ceiling on growth at a low point that used to be a seen as close to a recessionary floor (has there been a recovery if that is the case?).

Given the seven years of constant “stimulus” that is more than a rough result, even under the revised paradigm.