The Argued State of Labor and Wages

The Argued State of Labor and Wages

When the BLS’s Employment Cost Index fell to a two-year low last quarter (Q1 ’14) there were no expressions of fear over “deflation” or that the economy was growing weaker, instead mostly mentioning the intended aberration of supposedly everything. There were, in fact, very few pronouncements at all at the time. Yet, what a difference a return to trend makes. The headlines have been all over this today, though very few actually pay attention to it outside of carefully narrowed circumstance.

Going from a two-year low to slightly above a very weak trend is now treated the same as “the highest wage inflation since 2008.” Lies, damned lies and statistics. As is so often the case, context fixes a lot of these deficiencies, particularly when they are so intentional.

The implication of the idea of faster wage inflation is recovery. Growing and sustainable labor utilization, as we have been told, persistently, is happening now, should by its very nature lead to upward pressure on wages (and benefits to some lesser extent, particularly given the circumstances now). Therefore, any statistical pick up in calculated wages and benefits feeds this idea of an economy beginning to take off.

It takes very little actual context to disabuse that notion, however. 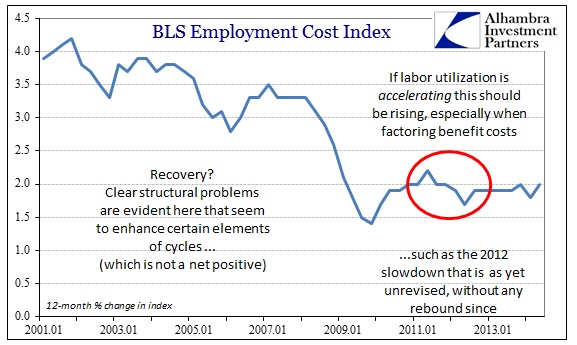 The Employment Cost Index has been stuck around 2% for more than two full years now, and there is nothing here to indicate anything like “escape velocity” or even a surge. In fact, what we see above is nothing short of wreckage. There is something very wrong in an economic system that appears like what we see in that chart. True wealth is the trade of labor for productive purposes, and a rise in true wealth will always lead to an increase in actual wages; that is an axiom of true economics that belies everything about monetarism. 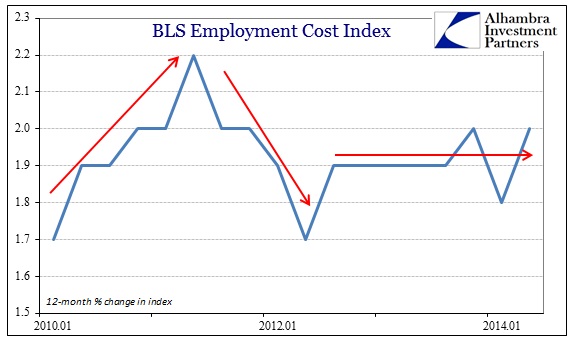 Instead, what the ECI confirms is what everything else has about the economy slowing in 2012 and never regaining its footing. That included, up until yesterday, GDP. If the accelerating economy were taking place, you would think, given the absurdly low unit costs for labor here, that businesses would be falling all over themselves to hire rapidly in higher-value industries. But that isn’t taking place, though narratives surrounding the BLS’s own Establishment Survey try to see something seemingly similar.

What the mainstream payroll surveys actually show is quite different from a true economic standpoint. The only businesses really hiring, assuming the statistical validity of the labor reports, have been low-end service jobs and part-timers – the bartender economy. That indicates not true wealth gaining but rather concentration of asset inflation, as all this “slack” in actual labor resources is put to use in low productivity environments servicing those closest to the redistribution. It is a bastardized and greatly inefficient “trickle”, but it is certainly not actual wealth. The greater the financialism, the less actual wealth and therefore the struggle in wages as presented above; going back beyond the turn of the century.

Low end servicing of the asset inflation capturers is, again, not anything like what we would see if the economy were actually gaining strength and sustainable momentum. Whatever your thoughts on the constant revisions to GDP and their relevance to anything meaningful, this actually contradicts (one more for the ledger) the stability and recovery notions that have been revised into existence. Of course, it is entirely possible that this particular statistic is completely wrong, but that is the problem when major data points are at odds with so many other series.  Something has to be off somewhere.