There is a lot that is deficient about the idea of the plucking model, but that speaks more about its mainstream use as a “law” of economic behavior than the elegant and intuitive simplicity behind it. Its primary observation is that a recession is the temporary interruption of the larger trend of economic advancement. What is missing lately in the rush to redefine pretty much everything about economic standards is the operative word in that definition: temporary. 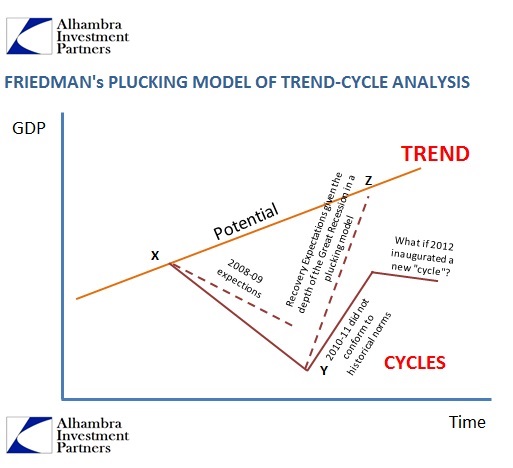 Had the Great Recession acted more recessionary, the closing of the cycle would have taken place years ago. And by closing I don’t mean simply matching the previous cycle peak of late 2007 or early 2008 (depending on the economic factor being used as comparison), as that is not what conforms to the plucking model at all. Cyclical recovery, as shown above, means returning all the way to the previous growth trend – nothing short. That is recession, again a temporary interruption in an otherwise unbroken advance.

What we have seen since 2008 defies that definition in every way, from conspicuously violating symmetry to the bastardization of the idea of recovery, and even its definition. We are persistently reminded that the economy (and this has been applied everywhere, from the US to Japan to Europe, even China) is supposed to be in “recovery” yet the distance traveled toward that goal continues to elongate further and further.

A full part of cyclicality, and the piece mostly forgotten or cast aside for expediency, is time. Though it is used as an axis in graphical representations, it is most often the one factor totally ignored despite its central role. The plucking model shows, actually, that compounding and time are central to the nature of economic advance, which is one reason why symmetry and maintaining trend is so very important.

That has not occurred anywhere in these most recent “recoveries.” We are starkly reminded of it again as Europe “unexpectedly” falls backward once more. Italy, after forecasting actual growth, is heading back into recession, violating fully the idea of even current corrosively condensed belief of cycles. That goes as well for all of Europe, where GDP and other factors showed positive numbers going back into the middle of 2013, but that was simply the absence of further contraction rather than anything more meaningful or conforming to the true idea of recovery.

“Today’s data are a serious reason for concern and confirm that the euro-area recovery is still sluggish at best,” said Joerg Kraemer, chief economist at Commerzbank AG in Frankfurt. “Evidence is mounting that risks to the ECB’s economic outlook are to the downside.”

Italian government figures estimated +0.8% GDP growth this year, but now they will be lucky to post another positive number at all. Expecting such growth was more hopeful than anything simply because the narrative becomes self-reinforcing regardless of actual context. That is what really takes shape, as the focus in such malaise become so narrow as to cloud the visibility of what is actually meaningful.

Europe’s recovery was instead quite damning in full context: 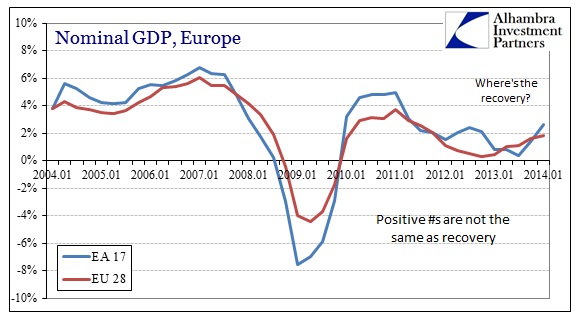 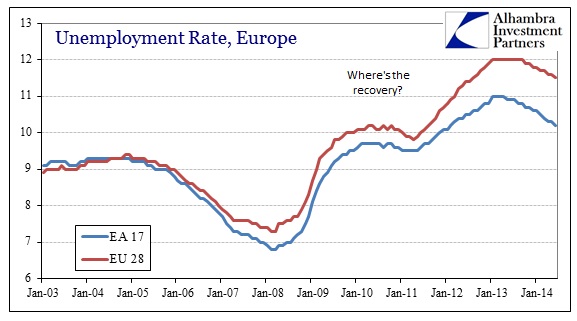 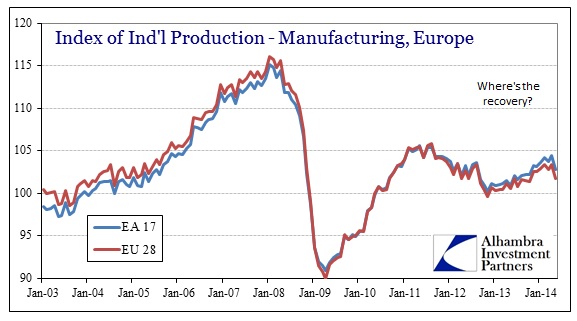 The problem is those positive numbers, as most everyone simply assumes extrapolation. In that manner, what passes as a pause in further erosion looks to be, for the eternally hopeful and optimistic, the beginning of sustainability. But a full recovery, conforming to the actual definition, is never really questionable since the underlying trend remains both valid and visible. Further, the seeds of recovery are not driven by guesses about monetarism and negative interest rates but by the creation and drive toward true wealth. It’s probably a good rule of thumb that whenever persistent and even more drastic measures are “needed” then recovery is more likely wishful thinking than reality.

Everything in Europe over the past year has been screaming exactly that. From inflation to lending, financial irregularities during this period of positive numbers were demonstrating that in reality structural problems remained. There has been no solution to the massive imbalances of the prior “growth” period, only a masking of them via intense and “targeted” asset inflation.

As Rick Santelli asked me directly, what do those PIIGS bond prices actually represent? Decompressed peripheral spreads and record low yields indicate only that Mario Draghi promises to buy them at some “favorable” price (set exclusively by him and his committee) rather than a discounting of anything of actual importance. 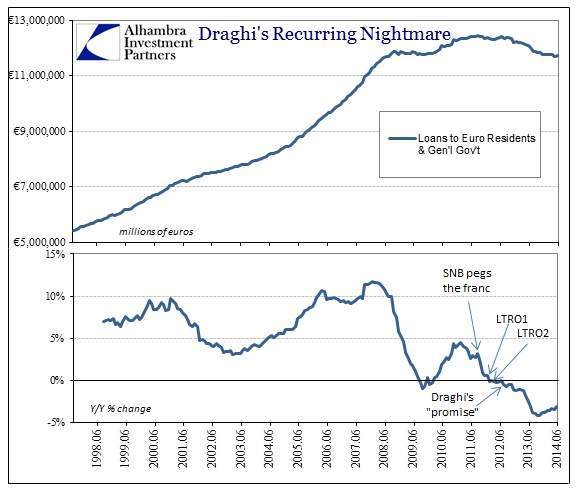 In actual context, these deficiencies become very clear. A recovery as defined by economic trend in the recession cycle would look more like this: 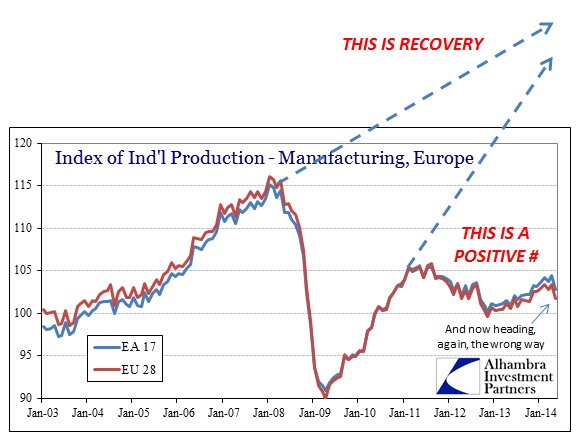 Again, time is the major factor here as the longer it takes to close the gap to previous trends, the worse the system’s erosion remains. Compounding is working against the deficient in a manner that is never appreciated by monetarists who only take the short-term view (thanks to Keynes’ deplorable “wit” of ignoring timelines). The longer this continues, given the march of time, the larger the inevitable breakdown as erosion is not limited to just accounting notions of economic factors, but cracks appear in political and social cohesion in broad and more disturbing fashions (the only growth industry is the political fascination with Marxist definitions, such as inequality, and purported prophesy of “capitalism”).

If only Europe were the main manifestation of such malfeasance, but it is global. Recovery is still being hotly debated in the US despite trillions in “stimulus” of every form and variety, now almost exactly seven years after the first rumbling of crisis – and more than five full years after the worst supposedly ended. 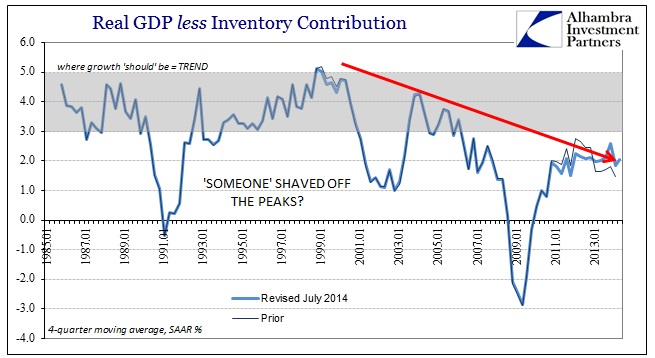 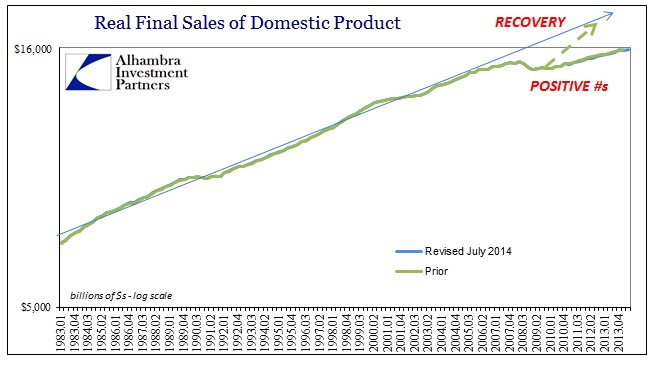 Even the latest revisions to GDP, redefining the whole trajectory of the “recovery” period, show all too well how the word does not apply. Growth has been at best (at worst moving in the opposite direction once more like Europe) stuck significantly below where it “should” be to conform to trend, and thus true recession cycle.

The more this goes on the more it should be apparent that cyclicality is actually missing here. This goes way, way beyond even orthodox admission to “structural issues” as it defines a wholly separate paradigm. It should be by now sinking in that this was never recession to begin with, but rather depression. Of course, simply using that word conjures terrifying imagery, but it has more and valuable practical meaning beyond scare tactics.

For one thing, cyclical “remedies” will not work, even in full artificiality, during depression where they would have at least some significant imprint upon a true recession cycle. That is because the underlying growth trend, that has only temporarily been interrupted in recession, remains durable and sustainable enough to withstand even counterproductive monetary intrusions. Nothing we see here, in Europe, or elsewhere would conform to even any small measure of that interpretation.

While Italian officials and orthodox practitioners the world over can wallow in “unexpected” weakness and the third such interruption to their aims and designs, the sad fact is that the global economy has been rocked off its prior axis. Recognition of that is the first step in crafting any solution; unfortunately the next step is eliminating enough ideological bias in order to see it was monetarism itself that “accomplished” just such a “feat.” Financialism is the corrosive agent, but time is already working against the third bubble.

In that respect, if we are indeed enveloped by depression, then we are simply counting the time between the ebbs and flows, the contractions and the absences of them; nothing more.