I thought it appropriate in honor of Irwin Schrödinger’s birthday to revisit an exhortation he received from none other than Albert Einstein.  Not long before he died (Einstein, not Schrödinger) he sent a letter which contained the following observation:

You are the only contemporary physicist, besides Laue, who sees that one cannot get around the assumption of reality – if only one is honest. Most of them simply do not see what sort of risky game they are playing with reality – reality as something independent of what is experimentally established.

Dr. Einstein was speaking of Schrödinger’s paradox, or what is known colloquially as Schrödinger’s cat.  Dr. Schrödinger was attempting to refute the Copenhagen interpretation of quantum mechanics which, up to the point of Schrödinger’s contribution, meant solely a universe of pure probabilistic math devoid of any “entanglement” with observation of the real world.  While expressed in relation to the collapse of superposition, there are implications that run beyond just physics.

We have something of a similar problem in “economics”, a study or discipline that fancies itself as like a science.  However, as with the prior Copenhagen interpretation, current incarnations of orthodox economics is suspiciously bereft of observation, far more interested in the world of statistics and math then anything relatable to our daily existence.  That poses quite a problem for any pursuit that aspires toward respectable “science” because, as physicist Richard Feynman succinctly stated,

An undoubtedly smart economist is now installed as the Vice Chairman of the Federal Reserve Board and FOMC, Stanley Fischer.  He has held numerous internationally renowned posts, including a term as Chair of the Bank of Israel, and is well-respected seemingly by those inside and even outside the establishment.  Perhaps that is because he seems far more predisposed to actually speaking plainly as to at least the obvious.

The above quote was taken from a speech given just yesterday in Sweden and seems to be quite a break from the bland orthodoxy that is loath to diverge into observation especially when it is so inconvenient toward monetarist ends.  But where such goodwill ends is that Mr. Fischer falls back on the standard orthodox approach in analyzing that most important of all economic annotations.  Repeated experimentation of the monetarist variety has failed to produce expected results, which in any true scientific paradigm involves scrapping the theory and starting over.

Despite any forward step in the Swedish delivery, Fischer stumbles again backward by “identifying” the same old “problems” that have supposedly plagued monetary genius from Day One:

In the United States, three major aggregate demand headwinds appear to have kept a more vigorous recovery from taking hold. The unusual weakness of the housing sector during the recovery period, the significant drag–now waning–from fiscal policy, and the negative impact from the growth slowdown abroad–particularly in Europe–are all prominent factors that have constrained the pace of economic activity.

These are all undoubtedly factors creating “headwinds” for the US economy, but they are all easily observed as derivative problems, symptoms of something far greater which Fischer hinted in actually admitting failure (although without calling it as much).  But what is truly astounding is the final formulation upon which all this rests, namely an unhealthy (or unholy in the ideology of orthodoxy) combination of structural problems combined with an unclear view of cyclicality.  That observation is uncontroversial, but this is hardly consistent with what has taken place:

Possibly we are simply seeing a prolonged Reinhart-Rogoff cyclical episode, typical of the aftermath of deep financial crises, and compounded by other temporary headwinds. But it is also possible that the underperformance reflects a more structural, longer-term, shift in the global economy, with less growth in underlying supply factors. [emphasis added]

The quote immediately above actually preceded his “headwinds” formulation.  And that orthodox equation is followed later by further maddeningly un-investigated “supply” observations:

Another factor that may be contributing to a slowdown in longer-run output growth is a decline in the rate of investment. As is typical in a downturn, movements in investment were important to the cyclical swings in the economy during the Great Recession. And, as would be expected given the depth of the downturn, investment declines were especially large in this episode. However, in the United States, and in many other countries as well, the growth rate of the capital stock has yet to bounce back appreciably–despite historically low interest rates, access to borrowing for most firms, and ample profits and cash–causing concerns over the long-run prospects for the recovery of investment.

That should be the one unambiguous observation for all of the monetary pieces of this grand experimentation; “despite historically low interest rates”, a qualifier that disqualifies monetary policy of having the effects it both intends and expects.  In his conclusions, despite all these allusions to unspecified problems and deficiencies, Fischer is both still somehow supportive of the idea QE was successful and more than sanguine about the further efficacy of related policy prescriptions, including the growing chorus turning fad of “macroprudential” policies.

That is more than curious given that the entire speech leaves unanswered the great problems of today – he never really offers anything tangible that directly addresses the deficiency of the recovery.  All that remains is but a weak description of the malaise, including the observation of labor fractures that have been evident since at least 2000. To go from that to being positively assured of monetarism’s continued power is to say the least incongruous, if not fully contradictory.

No theories were expended by Mr. Fischer as to what may actually be drastically altering the trajectory of investment in the US and globally, these unnamed “supply” structures, which might also be very explanatory toward labor problems (beside the lazy attribution of demographics which this discourse was, of course, “obligated” to deploy).  The lack of actual speculation on this account is quite revealing, as it is in the course of observing it in context: 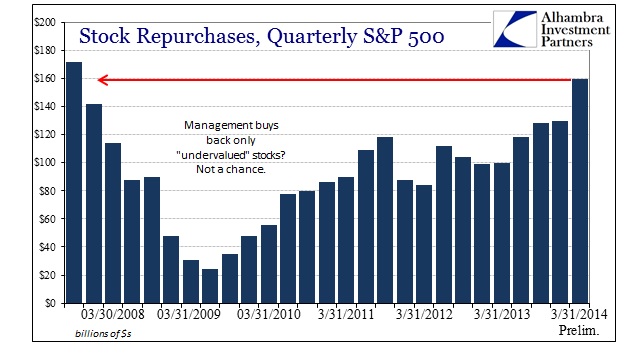 Since the start of QE2 in 2010, the 500 companies of the S&P 500 have repurchased an astounding $1.5 trillion in stock (through only Q1), sending the index soaring while at the very same time confounding economists as to why the productive base in the US and globally may be so eroding.  That this has been done via cheap debt also indicts the monetarist impulse of “historically low interest rates” as a means for economic growth that is efficient, and thus actually sustainable.

But it isn’t just the opportunity cost that is corrosive here, as monetarism directly impacts corporate actions beyond the short-term financialism.  The debt borne by each of these companies, induced by that monetary effect of low interest rates, is an anchor upon future considerations, particularly as businesses are well-aware of cash flow implications arising from interest payments changing and the very real prospects of less-than-ideal rollovers.  Liquidity considerations become far more paramount, in terms of this financial investment, about balance sheet structure on the liability side rather than the asset side where productive investment in actual capacity resides. 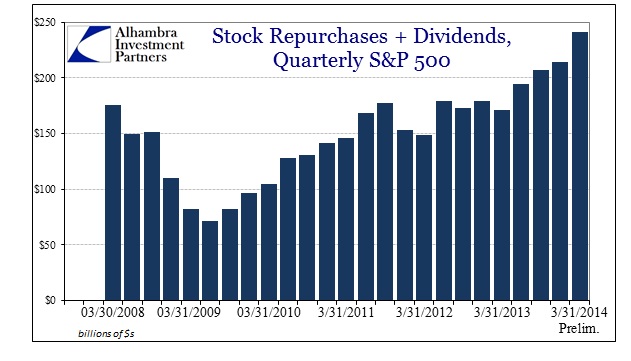 That observation includes, in this arrangement of “reach for yield”, funding historic levels of dividends, all in the name of stock price ascent.  In a world of engineered bubbles, why is it so surprising that even corporate management would re-orient their focus in that direction, even if they did not get directly paid via this inflationary process? That they actually do receive most of their compensation directly via stock price simply makes this an easy intuitive leap of nothing more than common sense – long-term matters very little while riding the bubble upward and getting paid to catch as much of it as possible.

Does detached management care if the long-term productive base of the company is left unaffiliated with fiscal arrangements of this type?  By then that will be someone else’s problem, long after each golden parachute has been deployed, captured and liquefied.  Stock price payment is no assurance, in fact very little assurance, of long-term attachment to a particular business.  Perhaps that is an unfair generalization of the current corporate structure and management teams, but given the pattern of repurchases (low during the bust, highest at the peaks) I don’t think it at all inappropriate and actually highly revealing and confirming of exactly this analysis.

That economists absolutely refuse to make this observation and place it appropriately in the context of persistent failure is a direct violation of science.  That they remain enamored with their regression equations and statistical modeling adds no additional objective, scientific creed.  As Schrödinger and others easily confirmed a few generations ago, there is actually no basis for ignoring the real world.  The reason for the conspicuous incompleteness in the current state of economics is equally obvious, as it would violate the sacred tenet of monetary neutrality, and thus invalidate nearly all of monetarism from the core outward.  To the economist like Fischer, it is more important to preserve that paradigm than to actually proceed to recovery; to remain ensconced in mystery than to solve the puzzle and invalidate all prior theory.