It Really Is Deflating

It Really Is Deflating

One more point on retail sales and consumer spending, as though the figures presented earlier are, I think, all pretty demonstrative of what is taking place in the economy, they can still be enhanced by taking account of additional factors. None of the data from retail sales or Gallup’s measures of economic advance are “deflated” or adjusted for changes in prices. Adding even ill-suited “inflation” measures to the analysis brings in a new element that puts a very big exclamation on the economic erosion. If you take retail sales (ex autos) and deflate it by the CPI-U the deceleration in consumption and spending becomes even more pronounced. 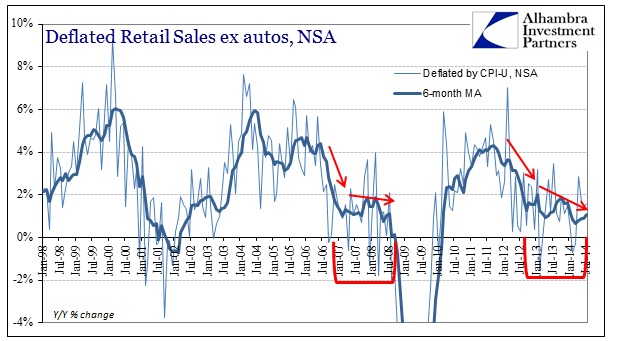 Not only that, the similarity with the deceleration from the housing bust and on into the Great Recession is simply uncanny. But if you deflate the same retail sales figures by the CPI-U Food & Beverage Index (which contains higher levels of “inflation”), the weakness stands out even more. 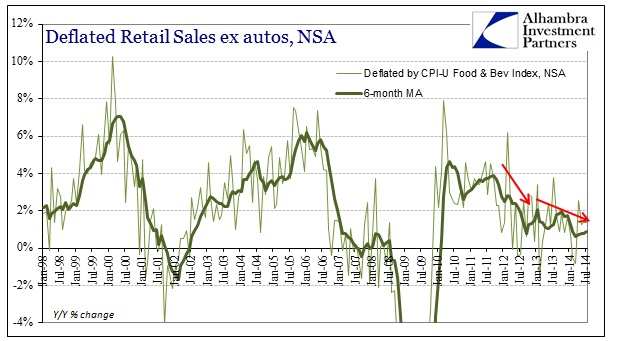 The pre-panic phase of the Great Recession looks a lot grimmer when using a heavier deflator, which may, in fact, be more appropriate given the changes in prices at that time (heavy on energy and food). In our current state, the low level of real growth is that much more challenging and provides, I think, a much fuller explanation for economic erosion as it exists right now (which, for the mainstream, amounts to “mysterious” and “unexpected” setbacks that are seemingly permanent fixtures).

From that point, the factor of price changes and monetary intrusion becomes an amplification of the problem with wage growth; really the lack thereof. Spending and wages have a tight relationship in most cases, but the evolutionary changes over the past three decades have hidden some of this. If you look at wages and spending in the 1990’s, there was an extremely tight correlation between the two, as wage growth led spending growth. Given that wages were rising quite robustly, that was seemingly a healthy relationship.

After the recession in 2001, wage growth began to lag quite noticeably, but spending took a steeper trajectory anyway. That was the historically low savings rate made possible by the housing bubble’s leakage; houses as ATM’s. In that respect, unfortunately, monetarism’s reach was “successful” in that it used debt to almost sufficiently cover the disastrous attrition in true wealth creation. But, as we know now, that simply meant growing impoverishment that would be revealed in the collapse into the Great Recession.

Thereafter, during this “recovery”, spending has once again been closely tied to wages, with minor adjustments in the savings rate evident in 2008 and 2009 (savings rate runs upward as households hold back spending more than wages drop), and then the reverse in late 2010 and 2011. Because monetary “transmission channels” remain blocked or partially obstructed, there has been no return of the mid-2000’s pattern (which is a good result).

That leaves only the lack of wage growth as a pure explanation for the paltry advance in really the entire economy. That is, again, very much a definitive indictment on the generic “aggregate demand” theory of “pump priming” where spending of any type is supposed to lead to more instances of it. That simply has not been the case, and it has left the economic establishment searching and scrambling for any kind of partial answer that leaves the status quo paradigm intact. What is missing, and where monetarism cannot penetrate, is true wealth, as wealth creation leads directly to labor utilization and wage growth that, as seen here, directly and favorably impacts spending.

Without wages expanding as they “should”, consumers and the overall economy are then left at the mercy of redistribution through price changes.