The ECB’s experimentation with negative nominal interest rates is exactly that – an experiment whose range of conclusions spans the full spectrum of possibilities. I have absolutely no doubt at all that they have done enough regression calculations and monte carlo simulations to have estimated “central tendencies”, but at the same time I highly doubt recent developments fell within them. It’s not just that the European economy grows weaker in relatively quick (and of course “unexpectedly”) fashion, but that the financial purpose of narrowing the corridor and sinking the rate “floor” below zero was, as stated at least, to push banks toward risky activities like lending.

I’m not sure that was ever a realistic goal given the state of ongoing depression throughout Europe ex-Germany, but it conforms to the “buying time” thesis of monetarism. The idea is plainly evident now in the ashes of repeated failure, as removing financial disorder is believed to be the great clearing of impediments in order for the economy to return to its great and good potential path. The inability of any of these economies (US very much included) to do so has central banks scrambling once more, and still seeking out financial irregularities to “fix.”

There is more than a little desperation in the latest ECB deepening of the negative experiment. But I also have a feeling that the ECB has narrowed its gaze onto Eonia in what looks like obsessive compulsion to “make” it work “right.” There is very little public information about central bankers’ intents, so this is pure speculation reasoned (maybe badly and incorrectly) from an inordinate number of programs aimed in this direction to now this heavy degree.

We can look at the European financial system all the way down to its base cases, whereby lending is tied to liquidity (or believed to be so). Liquidity itself is predicated on the willingness of “cash rich” participants to lend overnight and short-term via various wholesale channels. The ECB’s monetary policy in interest rate targeting is the rate corridor it applies through its three main financing rates; all of which give those “cash rich” banks options for supplying (or taking away, as hard as that may be to remember about what “normalcy” actually looks like) liquidity.

The main financing rate is called exactly that – the MRO. The main “private” interbank rate is Eonia, but whereas the MRO is secured by collateral posted with the ECB, Eonia is unsecured much like federal funds or LIBOR. Given the range of choices and this setup, there should exist a positive spread (most of the time) of Eonia over the MRO. 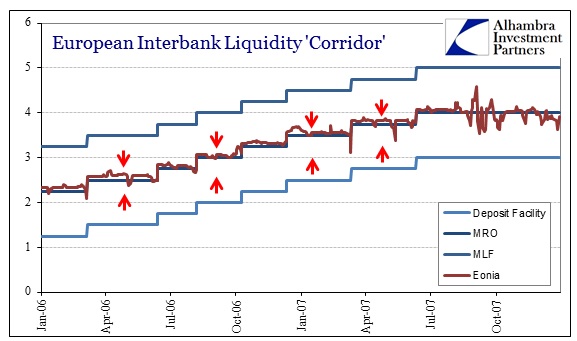 That was true up until August 7, 2007, and then again on August 9, 2007, when Eonia suddenly jumped 23 bps above the MRO only to settle below it by August 24. From there, the Eonia/MRO spread picked up quite a bit of unsettling volatility. Any central bank facing liquidity problems such as that is going to use its facilities to try to “calm” markets by reducing volatility – and that includes eliminating any persistent and especially visible “abnormalities.”

It’s really lost in the wash of conventional history of that period, but the ECB on July 8, 2008, actually raised interest rates (shifting the whole corridor up) by 25 bps. Of course that sounds somewhat insane coming just two months before a full-blown global panic, but given what was transpiring within European interbank markets it actually seemed consistent with the desire to “gain control.” The ECB did so again in 2011 for, I believe, the same exact reasons. 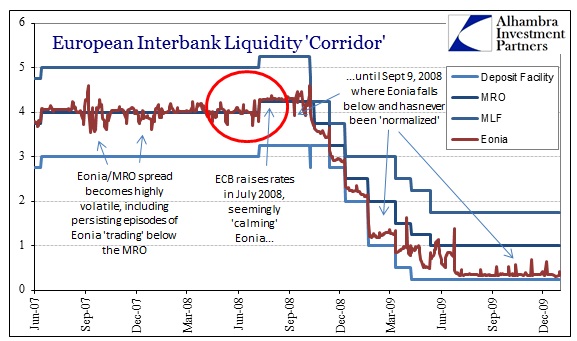 For almost two months, the rate increase seemed to have done its job, as it very much looked like in the summer of 2008 that the ECB “chased” Eonia to get it to appear far more normal (chart immediately above). The obvious and expected benefits of doing that were to project calm across European interbank markets and gain liquidity so that lending and credit could go back to persistently financializing once again before, they hoped, much economic damage would be incurred.

It didn’t work because the problems with liquidity were far deeper than generic orthodox tendencies ever penetrate – making Eonia “look” normal isn’t the same as actual calm, but to central bankers that view the world through spreadsheets and pure numbers that was a logical course to take. Ever since then, Eonia/MRO has been in a constant state of disorder, giving the ECB a pure target that conforms to its overarching theory about regaining economic trajectory.

Despite all protestations of European recovery throughout 2013, there again lay the negative Eonia/MRO spread to suggest (highly) something very much amiss (again, deeper problems beyond just that negative number). 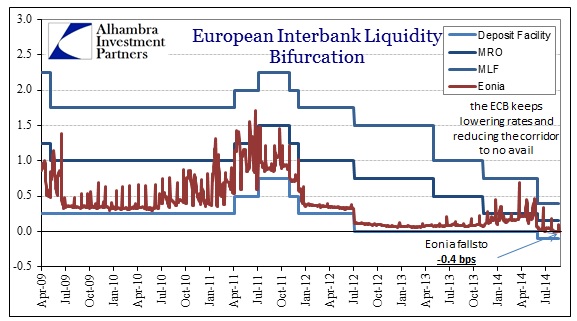 When European banks started to wind down their LTRO usage past a certain point, Eonia’s spread grew volatile once again (as did Eonia itself). That was another big problem as “normalization” of the financial system was nothing of the sort, but rather just the removal of past band-aids revealing unhealed wounds. It seems very much like the last three ECB actions (including the most recent) have been once again, like 2008, aimed at getting a handle on the Eonia/MRO spread in order to finally and definitively project calm liquidity conditions in private interbank markets. 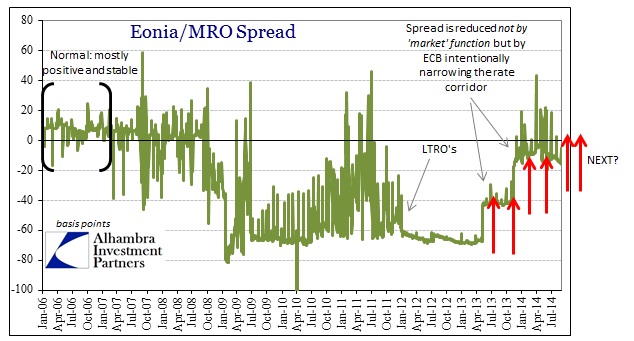 Each time rates are cut and the corridor is narrowed, the Eonia/MRO spread is diminished, as the rate movements follow that pattern. But it isn’t Eonia that is moving, rather the corridor is adjusting to Eonia rather than what is supposed to be Eonia moving to monetary policy and rate targeting. Given how the rate corridor is supposed to function, this backward arrangement (if this is the correct interpretation) speaks to really awful actual function there.

The question now is whether or not the ECB sees the zero lower bound as a hard boundary by which it can “trap” Eonia against it and gain that long-sought positive and stable Eonia/MRO spread.

The indications of the past week or so are very much inconclusive toward that end. Eonia has, for the first time, fixed at a negative nominal rate that has remained negative (if we set aside the end of August window dressing fixup). These amounts are very small, with September 1 showing the lowest rate of just -1.3 bps. Perhaps if Eonia stays negative but just on the other side zero, the ECB can finally bag its quarry and end its quixotic quest for the appearance of interbank normalcy. And maybe it will take a negative MRO to do it, but it does seem very much like they are intent on trying.

There is the possibility that Eonia is moving in anticipation of these rate movements, as you would expect under a functioning regime, but I have grave doubts that might be the case mostly confirmed today by the fact that the rate “chase” was very much unanticipated. Further, I think that Eonia moving of its own (and that therefore the ECB is following it) is also seen in corroboration by other indications of interbank movements. The Swiss franc, for example, began its most recent bend toward 1.20 on nearly the same day as Eonia fell to zero, both having remained in those respective trends since. 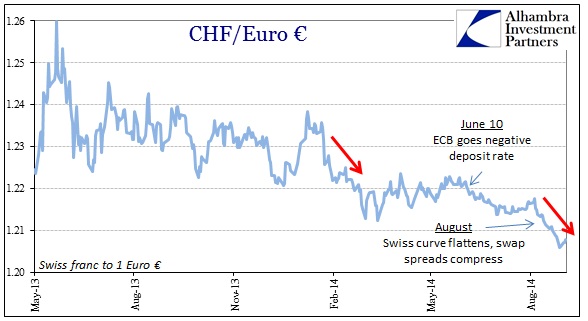 For the most part, this is all wasted effort (including engaging in a long explanation of why I think the ECB is really acting senselessly to the point of irrationality) because the orthodox theory is flawed at its most basic premise – financial normalcy will not suddenly unleash productive tendencies long buried under just this kind of financial monkeying. Bank liquidity will normalize when the economy does so, and not the other way around. Creating the appearance of calm and order by “making” Eonia trade above the MRO, come hell or high water no matter what the collateral cost, smacks of desperation. There may be the growing realization within the ECB (as with other central banks) that there isn’t much left for them to do, so they might as well do this. 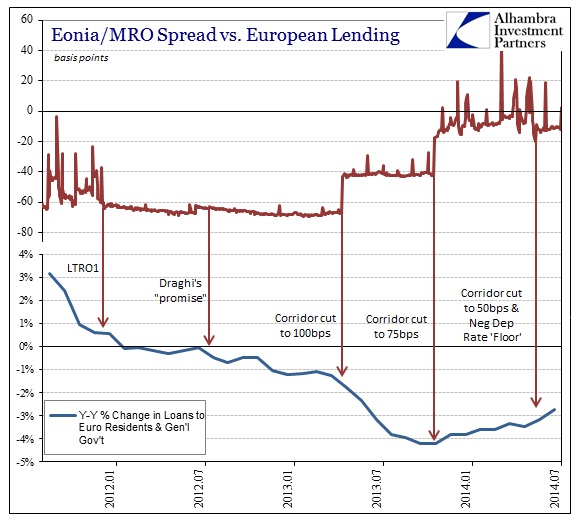