To go alongside the “unexpected” turn in payrolls Friday, the National Retail Federation issued a statement that highlighted a somewhat contradictory assessment of the US economic picture. They had an easy time stating the facts, or at least what was estimated of US jobs in the retail industry:

One more time we are served with notice that the sharp economic rebound due to nothing more than weather patterns established after the last Ice Age didn’t much occur. With inventory accumulating at retail establishments, you have to begin to wonder how these retailers are constructing their forecasts for activity. After last year’s highly anticipated QE-driven rebound that never materialized, it seemed more logical that these companies might place less emphasis on nothing more than the hopes and dreams of “economists” that their math might finally add up one of these years.

Increasingly it looks like basic consumer-related industries have taken the bait once again, swallowing the hook, line and sinker of the mainstream narrative that Q1 was a weather-driven aberration. Apparently US businesses have yet to part with, or even downgrade, their usage of mainstream forecast tools, particularly the perpetually mistaken Blue Chip Economic Survey. You would think that with so much at stake, monetarily, being caught so wrong so often would prompt sufficient motivation to peer into the actual state of consumers rather than the statistically-created narratives crafted by the very statisticians that “need” so many convolutions.

Sunny dispositions have not been without their own allure, however. For the highest ranking credentialed economist at NRF, August’s employment results offer up not just “unexpected” setbacks, but downright inconsistency.

“Today’s jobs report calls into question how much momentum the economy will show in the second half of the year,” [NRF Chief Ecnomist Jack] Kleinhenz said. “The employment situation report just does not fit into the overall economic landscape.”

To the statistician, the economy is consumer confidence and models of hourly earnings, and no doubt an overflowing portion of the Establishment Survey (when it’s over 200k). But do those really qualify as the economic landscape?

Opposed to the math-based view of consumer “sentiment” are hard dollars. Take, for example, Target (or WalMart or any other large retailer for that matter) that has been stuck without any actual revenue growth for just about two full years. That extends well-past both its recent disappointment with regard to online credit card security and the preferred idea that Q1 was overly snowy. 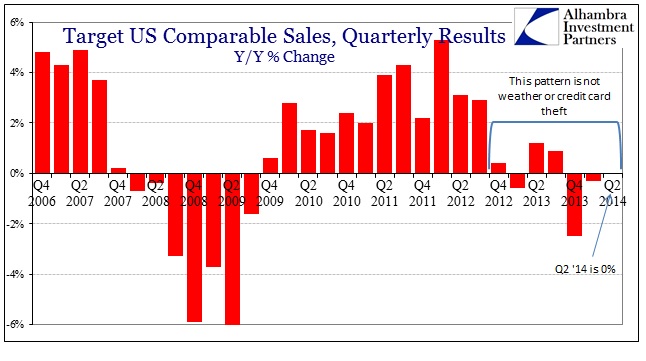 Target epitomizes the slow and elongated “cycles” that I tried to describe last week. There was a short recovery period, but it lacked sufficient amplitude particularly given the catastrophic losses suffered during the worst of the Great Recession itself. That narrower up-channel has clearly given way to a slender downswing that is almost as long as the downswing during the last recession – less up, longer down.

While that is compelling enough for what constitutes the “economic landscape”, particularly as this particular pattern has been replicated far and wide in actual dollar figures if not so much sentiment and sentiment surveys, I use Target here because the company offers a uniquely detailed look into their comparable transactions. By breaking down individual ticket averages into prices and volume, we can actually see (again, in real dollars) what is taking place with the vast majority of consumers and households on a microscopic level. 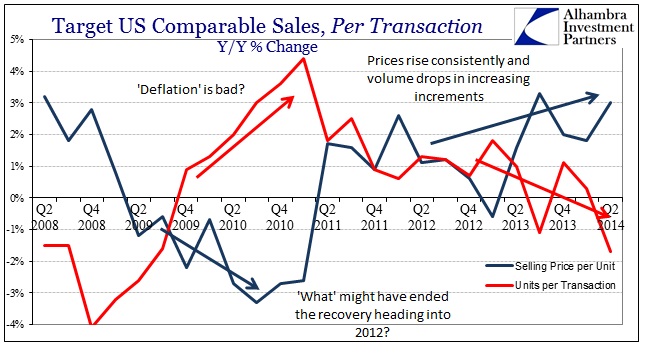 In one data stream you can see so much of what is wrong with economists and their statistical theories. Falling prices are assumed to be the worst economic case, so much that the Fed and its central bank comrades do everything they can, to highly intrusive and menacing degrees, to prevent even the smallest outbreak. Yet, Target’s actual dollar track shows that the authentic recovery after the worst of the Great Recession coincided exactly when prices were falling the fastest – something that actually seems intuitive about true economics.

However, prices suddenly “jerked” higher in 2011, and the volumes attached to each transaction have quietly sunk. This inverse relationship cannot possible be clearer when you use a 4-quarter moving average: 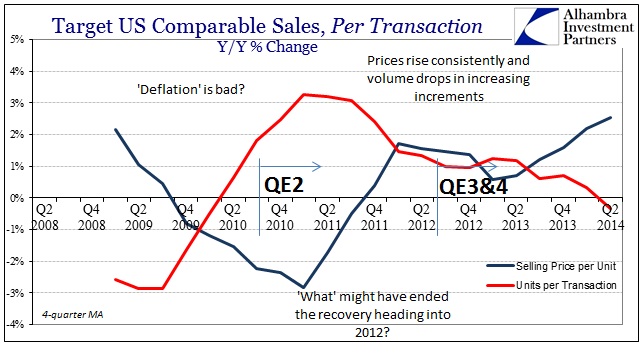 Volumes have been trending lower at Target ever since QE2 was brought upon the economy to deliver economic growth through the orthodox idea of “inflation” equaling aggregate demand. Rather, what occurred looks suspiciously like “inflation” suppressing actual demand for goods, while preserving only some temporary measure of revenue expansion; all the while that erosion sought greater destruction the longer it was “allowed” to fester. Thus, the cycle looks, appears and maybe even has truly been elongated. But what looked like a lackluster recovery, is, once again, an elongated process of nothing more than attrition.

That attrition comes about because, as is so clear now with Abenomics, the nominal redistribution via prices (caused by QE working on inflation expectations in commodity prices and the dollar on exchange to an unfortunately high degree in its earliest applications) does not actually create additional demand, only the dollar “value” of that trade. Since consumers actually get less stuff and pay more for doing so, they are left more than wanting and impoverished for their trouble.

As Ben Bernanke was fond of recalling during his QE experiments, he recognized the downsides to having created “losers” in the redistribution process. But in his orthodox view, a robust economy would more than make up for that – losers would be turned to winners as everyone gains in a robust and broad expansion. Except there was no real foundation for it – remember consumers have been getting less stuff and paying more to do so. How does that translate into robust economic advancement?

Throw in some massive asset inflation that suppressed the corporate impulse to productive investment and the proportional assessment is turned backward; far more losers than the narrow gains tied directly to nothing other than asset inflation and more (always more) financialism. There might be jobs assumed by the Establishment Survey, but income suggests that at best they are not the kind to rest recovery (or expectations for it) upon. As with Abenomics, what appears to be recovery is actually impoverishment as redistribution is tied to nothing but price changes, leaving out actual wealth and even actual activity.

It is, of course, dangerous to extrapolate one company’s figures to the wider economy, but, given the conformity of Target with so many other companies on the revenue and comparable sales side, applying this interpretation more broadly is not an unreasonable conclusion by any stretch. Which, then, is the appropriate picture of the “economic landscape”, that provided by statistical surveys of sentiment, or the hard dollars that are so often now unearned in how they originate actual economic flow? Maybe that does look like a weak recovery on the surface, but there is no escaping the descent no matter how little amplitude it shows at this moment.