Spending Flat to Lower, As Are Certain Indications of Consumer Confidence

Spending Flat to Lower, As Are Certain Indications of Consumer Confidence

Gallup’s daily spending tracking poll dipped slightly in August, but what matters most is that spending levels have been flat now going back more than a year. There is no insight provided as to why that has occurred, only that people at the bottom ends of the income spectrum are unwilling or, more likely, unable to increase their economic activity. 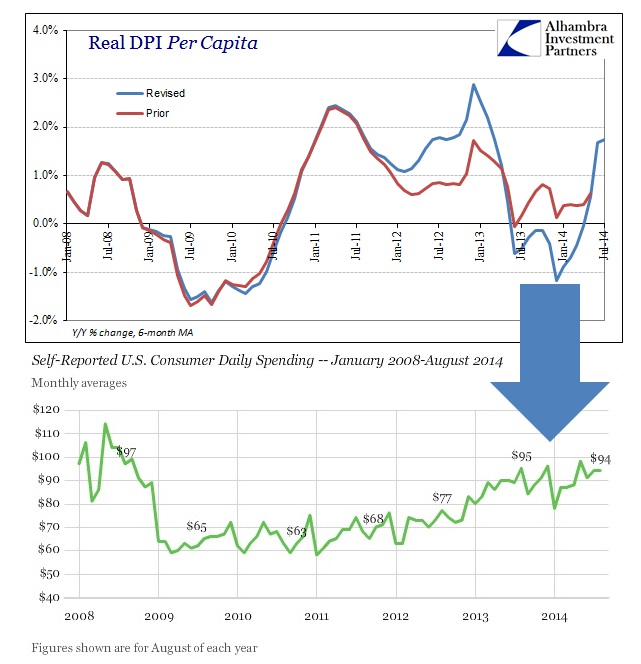 The coincidence of that sudden end in spending growth next to what is now revised to be the estimated pattern of income is surely related, though it’s impossible to tell how closely. In other words, it makes sense if incomes have been under pressure since the middle of 2013 that spending broadly in the economy would be as well.

In that respect, Gallup’s figures agree with the retail sales figures from the wholesale report I highlighted this morning – which only adds to the perplexity over retailers and inventory unless factoring prices. 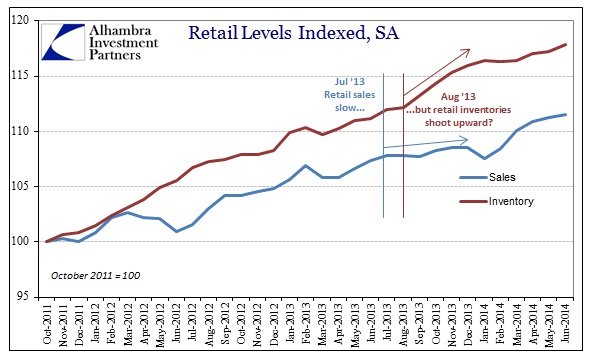 The fact that these three disparate data points all show the same trend dated to the same point in time is quite compelling and not so easily dismissed as a statistical anomaly or pure random chance no matter how contradictory to the “preferred” narrative of economic expansion. By this view, there has been nothing much of economic advance for quite a long period, an occurrence that would transcend weather and expectations for warmth.

No one in the mainstream of economics wants to talk about the refi problem as it has developed since exactly this same timeframe.  Mortgage refis are counted as among the strongest element of monetary policy, at least historically.  When issuing the QE3 decree, it was fully intended that a refi wave would add to the economic track, a “tailwind” of some undetermined strength.  I don’t think the refi process ever lived up to such expectations, but it undoubtedly offered some support to household resources and thus even a trickle of consumer spending.  Why would we not see the end of that refi wave, and it was particularly large, as being a downgrade in resources, and thus spending?  Curiously, it remains a topic outside the realm of discussion, though I think, given the timing of all these indications surrounding spending activity, that taper = tightening might have actually taken place on the spending side.

That all goes along with Gallup’s tracking poll of economic expectations, which has actually become slightly worse (not better) as 2014 has progressed. Given the disparity between income growth (whatever your view of payroll expansion) and what is likely price changes outside the CPI or PCE deflator experience this may very well tie in with the observations derived from Target’s presentations. 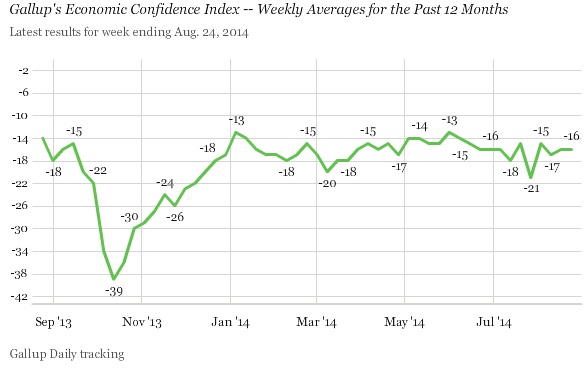 People having to pay more to receive fewer goods and services would certainly diminish their assessments of economic confidence – the question is why such observations are limited to Gallup and not more widespread throughout the various statistics created about “consumer confidence.” We know why that is not captured in mainstream measures of “inflation” since they are not setup to actually do so, as the CPI and others are intended more to match the orthodox definition of “inflation” rather than personal experience with actual price changes.

What’s really notable about Gallup’s measure of economic confidence is how closely this year’s peak ties in with their daily tracking of spending – both hit their highs in June and have been deteriorating, if only slightly and slowly, since then. That would confirm a lot of other indications that whatever rebound arose after Q1 was both limited and far too temporary. If that is indeed the case, inventory sensitivity will be even more dominant as we head toward yet another desperate Christmas season (Kmart’s first Christmas ad is probably only a week or so away) holding so much orthodox promise but set up to be even more disappointing than even last year’s disaster.