The retail sales release for August was actually quite alarming. The track of sales pretty much confirms the end of the spring “bounce” that showed up in Gallup’s figures, but the real concern is that the “bounce” itself was never more than a minor adjustment; an absence of further erosion as it were. That is nothing like what is being presented widely as the economics profession still clings to the notion that growth is accelerating and the recovery is right around the corner. 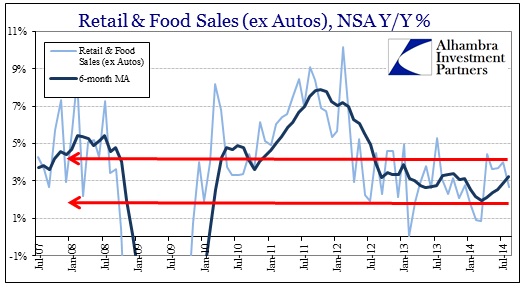 If this is acceleration enough to qualify for a full recovery then definitions need as serious revisions as have been taken to GDP:

The great recovery idea in 2014 was in comparison tiny and miniature to that of even 2008, a dubious place to start. Much has been made of revisions to auto sales in the past few months, but absent the overwhelming need to lease (rather than sell) cars consumer spending shows nothing but trouble (still).

It appears that the peak of this “rebound” occurred in June, which is about the same point as established in the Gallup poll. Whatever the view of 2014’s ultimate path, August’s retail sales were among the worst of the recovery period, which is not something that should occur during unquestionable growth – to reiterate once more, a recovery or sustainable growth would see at least 6-9% Y/Y, with 6% as a floor. Instead, several of the retail figures were actually below 3% in August (and retail sales without food and ex autos was up only 1.96%, meaning negative when adjusting for prices) having not seen that 6% minimum since early 2012. 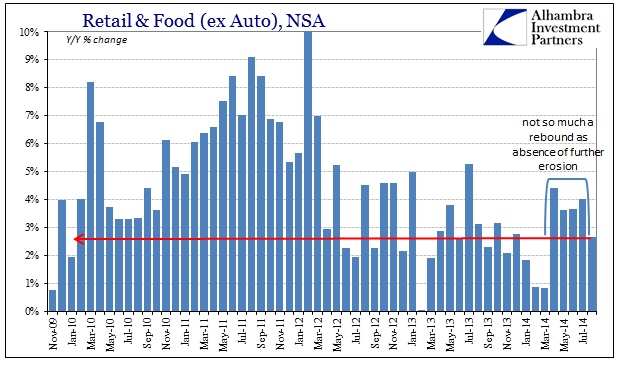 Part of the attempt to disavow the unbiased weakness in same store sales was the proposition that consumers are shopping more and more online. And that is certainly true, but not even close to the extent being labeled as an offset to what are clear deficiencies. The August estimate for retail sales among nonstore retailers was the third lowest Y/Y growth since 2009. It is dreadfully clear in wider context that even online shopping is faltering not bolstering. The linkage is obviously consumers themselves absent actual income growth, and not shifting preferences.

The wide similarities between what occurred after the housing bubble burst in 2006 and forward and the pattern of sales 2012 and forward is as compelling as it is worrisome. If you saw the results of 2006 until September 2008 you might be convinced that the economy, as represented by consumer spending, had undertaken a course of “muddle” growth – as it clearly downshifted but then entered a state of curious stasis whereby it seemed stuck without being able to enter a full upswing, but yet staying conspicuously out of contraction at the same time.

That the same pattern is being repeated is the opposite of reassuring, as what took place after 2006 was that slow erosion of the elongated business cycle, undoubtedly a direct corruption of monetarism and financialism. The elongation looks minor in comparison now only because the depth of the Great Recession has skewed our view of the entire cycle looking backward.

But there is no mistaking the similarities, especially when factoring price changes. What happened in late 2007 and early 2008 was that consumers were spending more and getting less, a form of erosion that does not fit within the comfortable confines of these kinds of results. Even deflating with the ill-suited and deficient CPI-U, however, shows very clearly this same type of slow erosion taking place in both the years immediately following 2006 and once again in the years immediately following 2012. 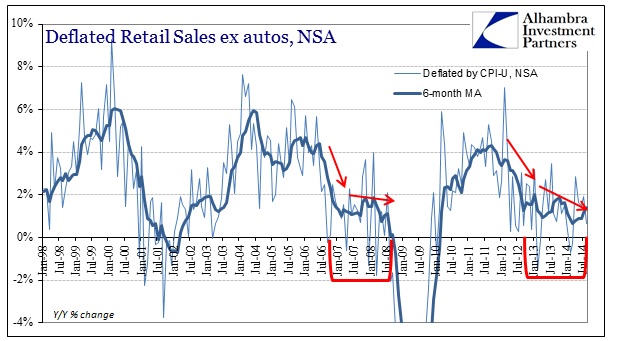 When factoring employment “growth”, particularly the narrative about such robust expansion in 2014 during this “rebound” period, it clearly is absent from retail sales. Even taking into consideration any lags in spending behavior, economists have been talking about better employment for well over a year, with Ben Bernanke speaking directly about employment gains in justifying tapering QE as early as May 2013. If there were actual payroll gains, there should at least be some trickle of the “pay” part rather than simple focus on the “rolls.” 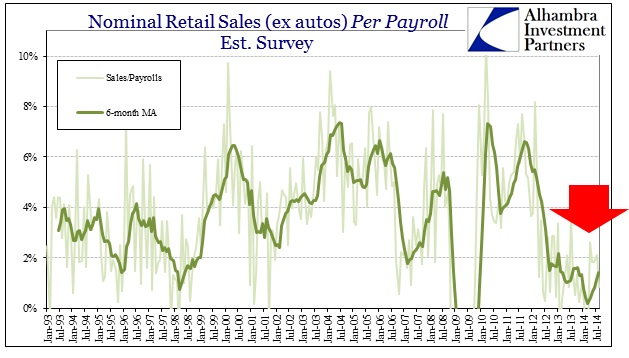 If you adjust nominal retail sales by the number of payrolls estimated by the Establishment Survey, clearly there is something very wrong. Either consumers are not spending as much as they once were after obtaining a job, instead saving all this robust income generated by a strong jobs market, or the actual pay of these jobs is nothing like what it has been in “cycles” past. I find the latter far more compelling than the former, but there is also the very real possibility that such payroll expansion is simply a figment of statistical fancy and thus does not exist in the real economy.

Again, this is not a trend that suddenly appeared in 2014. Whatever lags to spending via new jobs would have been made up by now, and accelerating payrolls should show up in accelerating spending – it has decidedly not. The chart above could not be clearer on that point. As with the rest of retail sales, and the other hard dollar figures like those of Target (which are pretty much confirmed by these retail sales numbers), the most meaningful interpretation is that of the comparison with 2006-08. The economy may be seeing some positive numbers in some places, but it is certainly heading in the wrong direction albeit perhaps imperceptibly to those not conditioned to think outside rigid sensitivities of what a cycle “should” look like.

If we have learned anything in the age of activist central banks, it is that the business cycle itself has been transformed, but not to anything good or positive. Slow attrition is still attrition, and since compounding is the most powerful force in the universe, a la Einstein, the time component of this pattern is perhaps the most destructive feature of this elongation. It would be far better to undertake a short but even very sharp downturn than to exist perpetually in alternation between shallow contraction and nothing more than its absence.