With Brazil in recession and much of the “resource” part of the supply chain nearing that or worrying about it, you can surely bet that there are “unexpected” problems in the Chinese economy. As much as the word “decoupling” is being used once again (though in 2008 it was reversed, with the world supposedly able to decouple from US weakness) the global supply chain is acting quite consistently. That observation assumes, however, that the view of the US economy is one of deficiency and not that which floats the FOMC’s rational expectations component.

The August industrial production estimate for China was unbelievably ugly, shocking in its proportion of the worst month since the Great Recession (which was a global event, no decoupling could, or will, take place). The year-over-year increase was just 6.9%, far below even the “bad” July increase of 9.0%. And lest anyone get the idea that this was a one or two month aberration (polar vortices were quiet), the YTD increase for January to August 2014 was only 8.5%, far below the growth from the same period in 2013.

That more than suggests not only a widespread slowdown, but also why Brazil and Australia are enthralled by recession. The larger question in a world obsessed by some ephemeral and eternally positive “global growth” construct (at least economists as they are in setting forward predictions about specific growth regimes) is how that Chinese slowdown fits within more unique circumstances about specific systems. When the first vestiges of Chinese production deceleration became apparent in early 2014, it seemed very curious to the mainstream because everything about “global growth” was headed in the “right direction.”

With end markets in developed systems turned, at least as forecast, for full recovery in the US, Europe and even Japan for once, Chinese problems and those further down the supply chain in places like Brazil seemed puzzling. The idea of decoupling “solved” that problem without actual examination.

Of course, that was not the case at all, given that the US experienced a sharp and very “unexpected” problem, Europe flirts re-re-recession and Abenomics has been shown to be an utter disaster. Further, the rebounds expected after the tax-hike in Japan passed and the weather turned warm in the US have so far eluded experience. Therefore, the slowing in China more than fits with what is actually taking place of “global growth.”

To that end, the OECD again reduced its economic forecasts for it, in a manner exactly fitting that which Stanley Fischer reluctantly provided. Each year starts out with unabashed promises of nothing but optimism, only to be groping toward excuses as soon as its middle. This year has been no different, though the casting of certain exhibitions are made to make it seem like that this year is something different.

However, there is no hiding from context. For anyone declaring a full rebound, the behavior of US demand toward Chinese imports is an “unexpected” disappointment. Whatever you think transpired in Q1, there is nothing like a rebound in the months since the snow melted. 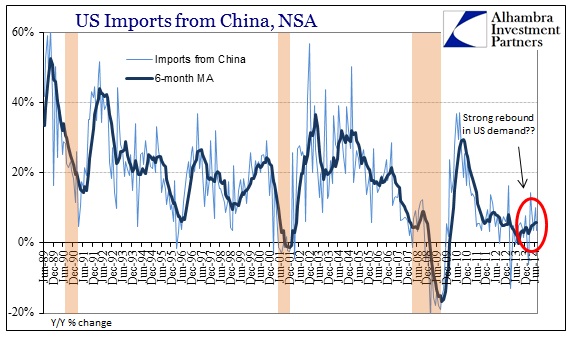 The pace of US imports from China is still about where it was at the worst of the dot-com recession, and about the same as the first two-thirds of the Great Recession. Global growth is a fantasy, only one that is more apparent now in Europe and Japan. The FOMC can make all the statements and proclamations it wants, but China and the rest of the world strongly beg to differ. Some “decoupling.”