There’s A Lot To Eonia and the ECB

There’s A Lot To Eonia and the ECB

The ECB turned to negative rates, at least as far their floor, back in June which was supposed to “force” banks to find a suitable alternative to liquid and safe. In orthodox terms this is called the “portfolio effect” as making low-risk contain an outward-facing cost should, as the theory goes, make financial participants shift into higher risk categories. Nobody wants a negative return on safety; or do they?

Right from the start, the ECB’s theory (which is one and the same as that being currently practiced globally) was challenged by reality. The academic conditions conjured up in the statistical models are not nearly sophisticated enough to capture all relevant factors in what is a highly complex system. Portfolio effects are not limited to “risk buckets” as policy makes it sounds that easy.

As of this morning, German 2-year bunds have been auctioned at their lowest level ever, getting more deeply negative by the moment, and Swiss securities still garner tremendous interest despite negative returns (on a yield basis, anyway). And in what is still the biggest thorn in the side of Mario Draghi, Eonia has turned to a minus sign on a consistent basis, meaning that banks themselves are lending to other banks (but not all) in a range just over the “wrong” side of zero. 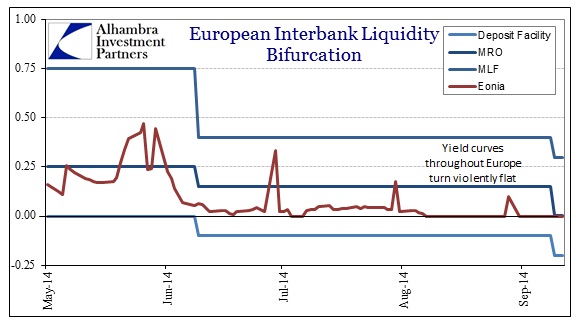 I mentioned back when the ECB “shocked” with its latest appeal to lower interest rates that it very much looked like Mario Draghi was “chasing” Eonia to try to “force” it to a positive spread with the MRO (where it “belongs”). With Eonia facing the zero lower bound, it has, at least until this point, been corralled even if it persists very slightly negative. In other words, the ECB, if that was their intent, has narrowed the negative spread as far as they possibly can without taking the MRO itself negative (in what would be a far more drastic step than the deposit rate floor).

In bringing the Eonia/MRO spread seemingly in line that may change the outward appearance of interbank function, but it does not challenge what is actually taking place. First and foremost, the drop in Eonia to zero and below took place at the very same time as yield curves around Europe worked violently and bearishly flatter. That means the problems in European banking are far deeper than can be arrested by appearance in a single rate no matter how important that rate may be. Given that the negative rate has persisted (along with other indications of growing concern, including Swiss swaps) there can’t have been much real reaction to this “chase” so far.

I think the predicament of Italian banks amply illustrates this divergence between academic theory and the real world in which banks must exist. In what is actually a positive development, Italian banks are, in the aggregate, shrinking. However, for a monetarist that is the worst possible occurrence not just because of the universal appeal of debt and credit but also that attenuating banks conjure emotional fear of “deflation” – which, in the monetarist textbook, is 99 out of the top 100 “worst” case incidences.

On the liability side, the smaller size of banks is evident in how they are funded most at the margins. The three largest components of “workable” funding are deposits, debt and what the Italians call Eccesso di passività tra le IFM (Excess of liabilities among MFI’s). It is curious that the deposit base of Italian banks is, at best, flat and, at worst, slightly shrinking too. It was only a few years ago that such a development was taken as an absolute signal that the euro itself was finished, but is now rarely even considered.

In that circumstance of 2011 and 2012, the “gap” in funding was provided by the ECB through its various and “creative” ways to simply obliterate all rules of central bank function. They re-described collateral that defied common sense, even allowing banks to pledged their own liabilities as collateral to the ECB, all with the purpose to close the liability gap as it was developing through what was judged as imprudent fear.

That is almost always the case with these instances, as central banks have become insensitive to “markets” over time, having little faith or seeing little justification for such massive rebukes. The entire premise of currency elasticity is that people are not qualified to sit in judgment about banking, so deposit balances are to be as irrelevant as possible to the continued function of any bank. The euro crisis put that central tenet of monetarism into practice. 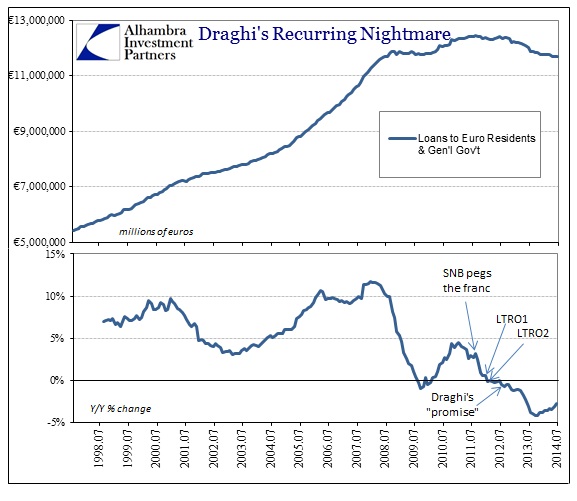 Yet, for all that was done not much was accomplished. Lending has not been primed by the incessant liquidity of the ECB nor its “chasing” through interest rates. There has been a very clear break between monetary theory that suggests (more than suggests, takes as ironclad law) the removal of banking irregularities is the only step needed to gain a positive economic course. That at least makes consistent sense when your entire theory revolves around debt and nothing but, as forcing “order” into the debt production process should allow the debt-based economy to continue on its way.

The real economy, however, is not simply a reduction of the credit impulse. Italian banks, despite interest rates and the “guarantee” provided by the ECB in July 2012 to buy as much Italian government debt as they wish, not only see flat to lower deposits, but are borrowing less from both the “market” and interbank. It is the latter that perhaps vexes European monetarism in its chase for Eonia, and highlights the seeming singular purpose towards it.

In July (the latest figures) Italian interbank liabilities (Excess of MFI’s) fell to the lowest level since January 2011! In one sense, that looks like a positive factor as if the crisis has run its course and is as over as it has been declared. But taken in the context of shrinking assets and lending, it is the opposite as it represents banks that no longer wish to participate regardless of how “cheap” funding can become through central bank interference. This directly contradicts what the ECB is trying to accomplish in exactly the place the ECB is trying to accomplish it.

In other words, the ECB, without appealing once more to “emergency” liquidity measures that might bridge any funding “gap” as deposits and borrowings languish, is pushing banks to borrow interbank but there is less activity exactly where they want it. Instead, as a negative Eonia proves, banks lend only to a select group and continue to persist in fragmentation. That is why, I believe, we are back once more to LTRO’s (with or without a “T” does not really matter) and liquidity focus. The major problem for all of this is as it has been since 2011, indeed since 2007.

The reason banks are in the shape they are has nothing to do with liquidity, instead having everything to do with the fact that credit and monetarism cannot produce that which they proclaim – healthy economic function. They are, as we see here, an actual impediment to it. 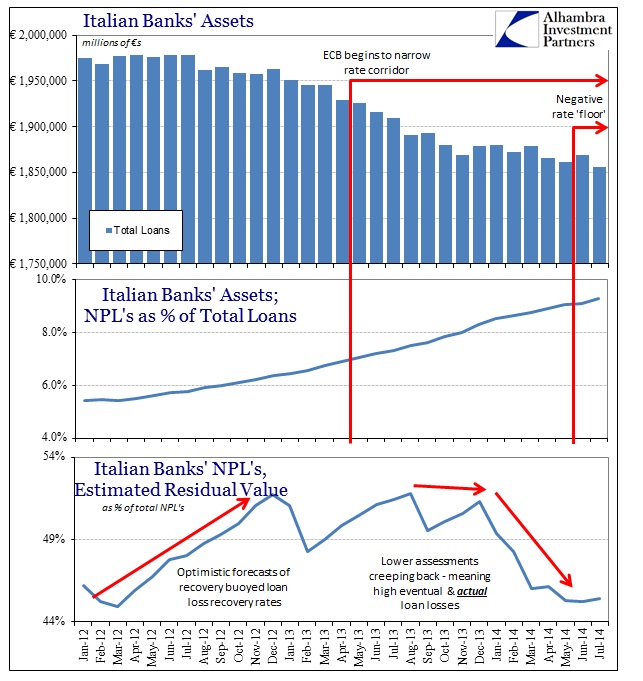 The basis for shrinking is because banks’ “product” is still spoiling from past episodes of debt and monetary intrusion. Italy is not just the most evident example, it is the largest example as we are talking about €172 billion of bad debts that are growing at 20+% Y/Y still in 2014. Liquidity matters very little when bad debts rapidly approach 10%, and, just to put more emphasis on true “risk” outside of manipulated interest rates, recovery rates (more precisely, estimates of recovery rates) on those bad debts sink dramatically so quickly.

That raised a couple of points, none of which are very favorable to the ECB’s position. Is the rapid diminishment of Italian presence in the interbank markets (which totally cements the idea of fragmentation there) of their own choosing, or the market’s? Are Italian banks actively retreating, matching asset shrinkage with liabilities, or are they finding very few lenders agreeable to lend to them and thus taking marginal funding problems to the asset side?

The former is bad enough on its own, as it would mean that the ECB cannot reach Italian economics, as it were. The latter is worse, as it would mean the ECB cannot influence the entire interbank market as it appears to worsen once again. That latter would also suggest that nothing of order was conjured through the extreme measures of 2011 and 2012, instead just another case of illusion taking hold if only temporarily.

Italy is certainly showing its own brand of dysfunction, but that does not make it unique to the European case. Rather, I think this means that Italy is just the easiest example of the link between bad monetary theory and the lack of recovery that plagues Europe. It is not as simply as liquidity and financial function, as economies are more than just debt and credit. What Italy shows is what the ECB can never provide, that the lack of wealth and productive function is the primary deficiency.