The Dollar Short, What and Where Now?

The Dollar Short, What and Where Now?

The first part of this examination can be found here.

At first, the rebound off the 2009 low looked as if there would be no lasting changes or damage to the eurodollar system, but subsequent events have shown that there is more than a little lingering dysfunction that does not sway or erase with central bank assurances (both psychological and of the QE variety; a redundancy that, for some reason, still needs to be pointed out). And so there have been punctuated arrest points for this dollar short: the euro crisis being the second in the string, and then last year’s taper = tightening. 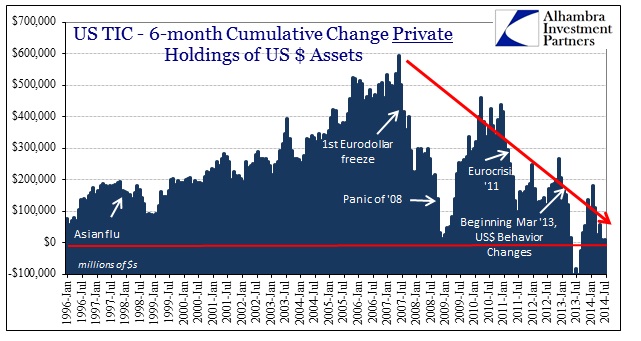 As this eurdollar system erodes, and the dollar short maybe grows smaller, that is not necessarily going to erase the dangers of the much larger imbalance as it was present in 2007. Just because it might be smaller now, that does not mean the weakness is as well. Instead, the paradigm shift itself is the primary danger, because there is very likely hidden feebleness involved in changing character of such a huge systemic facet.

That is where the repo market of late seems to fit in with this overarching paradigm shift. Again, foreign banks were not just users of US dollars through debt securities, they were often providers of “excess” dollars under certain circumstances (the huge imprint of Swiss banks on both the asset and liability sides). As they retreat from participation on the asset side, seemingly shrinking the dollar short (which may not actually be shrinking, it may only be growing more slowly on this side of 2008), they also do as well on the liability side as “providers” of dollars in wholesale markets. In short, less dollar liquidity, which very much includes providing interbank currency, i.e., collateral.

It is not surprising, then, to see the “value” of the dollar once again rising. As I re-emphasize in all these kinds of explanations, that “rising dollar” has nothing to do with “capital flow” as it is traditionally understood and commented. The price of the dollar is not being determined as the “cleanest dirty shirt” but rather a re-assessment about how easy dollars are to be obtained in wholesale format to keep funding the dollar short, even as it may grow smaller over time. That is the systemic change, in that the dollar short may well slowly erode under complacency, remaining all but imperceptible, but still shift into a higher gear now and again to cause disorder and disruptive havoc. It is not the size of it that fully matters alone.

This is another piece of the systemic weakness I narrated yesterday about credit market trading volumes. Basel rules and capital charges have eroded balance sheet tendencies toward risk absorption there, showing up as declining trading volumes, but also the profitability aspect where QE is no long assured to maintain positive price momentum. Aside those, we have to add and figure this foreign element of the eurodollar system that is no longer participating to the degree it once was. The “money supply” is much weaker now than it has been, but we still have no idea the state of the dollar short except through inference of seemingly related factors – like repo and TIC. 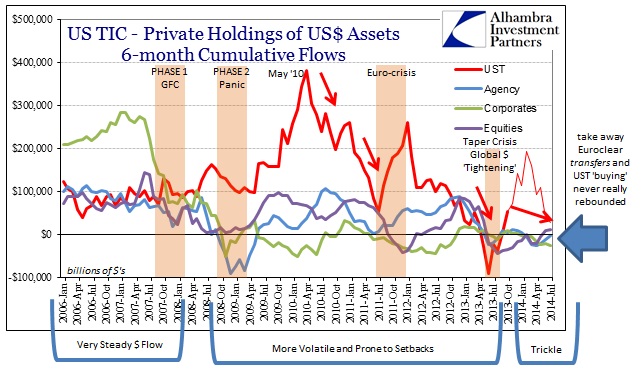 I think that adds a great deal to the erosion of credit market activity, particularly as those in the dollar short position to begin with are forced to re-asses their activities and balance sheet allocations in light of last year’s dollar disruption. Again, if you are in a short position you are extremely sensitive to how stable you view funding conditions; last year showed that stability was never anything more than a psychological experiment of QE and nothing more tangible than that.

The real problem is estimating not just estimating systemic liquidity as it relates to the size of the dollar short (Is the dollar short still as much or more than it was in 2007? Is the size of systemic liquidity more proportionally favorable now, or actually less so given recent study about the “exits”?). The composition of systemic liquidity capacity is more important (and I would argue far more so) than scale. In other words, liquidity right now compared to 2007, for example, would be far more proportionally structured in central bank programs and policies. For some that may seem a strength, especially since those means and measures did not really exist in 2007. My own analysis leads me to believe otherwise, particularly when looking at past failures of such programs to act as intended (looking squarely at you, reverse repo program).

In that respect, liquidity now so inorganically construed may make the system providing support for the global dollar short of whatever size far too rigid. After all, central bank bureaucracies are not well-suited for rapidly evolving (and especially devolving) circumstances, specifically as they are usually designed for the last crisis and not the next. Is there really much comfort that a wave of selling would be easily absorbed as liquidity is currently taken, particularly with what we see in repo markets now under so very benign conditions?

I should be careful in pointing out that these kinds of shifting systemic sands are not by themselves indicative of anything like another panic just around the corner. Instead, liquidity is what is available to absorb a change in sentiment yielding actual activity; a wave of selling induced by snapping out of incurious complacency. What all this tells us is like what anyone curious enough in 2006 or 2007 saw: that the state of imbalance is still imprecise and still massive, and that can be very dangerous under certain conditions. One of those conditions is that the foundation for all the assumptions underpinning the dollar short in the first place turns out to be a false one – that true economic growth is synonymous with monetarism.