Common Sense Said It Probably Wasn’t Worth It

Common Sense Said It Probably Wasn’t Worth It

When QQE was first officially introduced, I produced what I thought would be a “template” for the trajectory of the Japanese economy. On a strictly reasoned basis, without any forward calculations or regressions, the Japanese, and Bank of Japan in particular, were making a choice with what I thought was very little chance of ultimate success. You can understand, somewhat, why they did what they did, in that they saw deflation as the one true enemy; thus the removal of deflation would have been equivalent to economic salvation.

The problem is that such orthodox thinking misidentifies the main culprit, which is not “deflation.” The Japanese instance of it is a symptom of instability (not all “deflation” is bad, especially when being driven by productive and innovative adaption), and trading one form for another would likely yield only temporary though tantalizing results. So far, this unsophisticated and basic “model” for Japanese expectations has been far more valuable than the immense, complex and elegant mathematic “solutions” presented by every DSGE model (as well as their GARCH, TVPVAR, EDO modified DSGE or whatever else is loaded on the spreadsheet) employed by central banks. In other words, plain common sense versus econometrics.

As it turns out, however, I may have to make a bit of a modification on the “template” in light of recent results.

It may very well be the case that trading “inflation” for “deflation” may, in fact, be even more destructive. That seems to be a universal result of monetarism, having left each and every economic system whereby it has so intruded much worse for the effort; greatly defying everything orthodox economists believe about monetary neutrality.

The depressing tale of the latest Japanese estimates is all-too familiar now. The major problem, specifically, for Abenomics is that July through September was supposed to confirm the intended snapback. In other words, everyone expected declining fortunes in Q2 with the tax hike, but that was supposed to end toward the end of Q2 with Q3 being far, far better, particularly with this onset of “inflation.” Instead, two-thirds of the way through Q3 everything is still sinking.

I should qualify that assessment, as nominal wages have actually peaked above zero for two straight months (though there is still the regular downward revision to come for September). 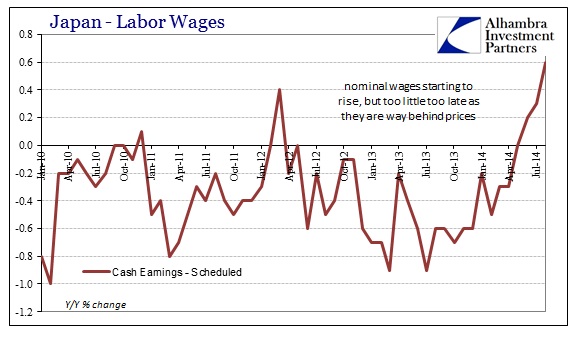 The immediate reaction to such “success” is “so what.” The effect of “inflation” on wages is trivial compared to that on prices so far, largely due to the disastrous acceleration of Japan’s trade deterioration. As nominal wages rise ever so slightly, “real” wages sink Japanese households further and further. 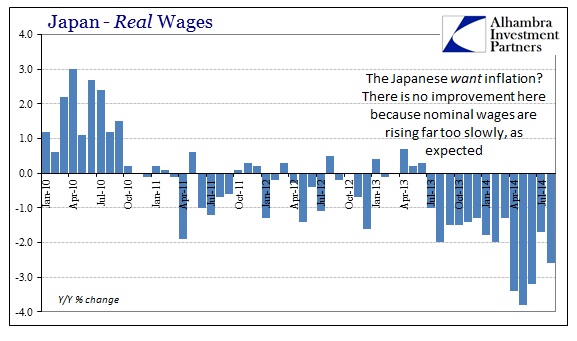 In macro terms, there isn’t actually any more work being done despite an ongoing reclassification of part-time toward full-time (as Prime Minister Abe conspicuously alluded to in his desperation). Total hours worked, which is a prime indication of actual wealth and wealth creation, sank by almost 2% in August, the worst showing going back to the middle of 2013. Since QQE began (or what is really just the 10th version of QE in one form or another) there really hasn’t been much change in labor utilization, no matter what the unemployment rate might suggest. 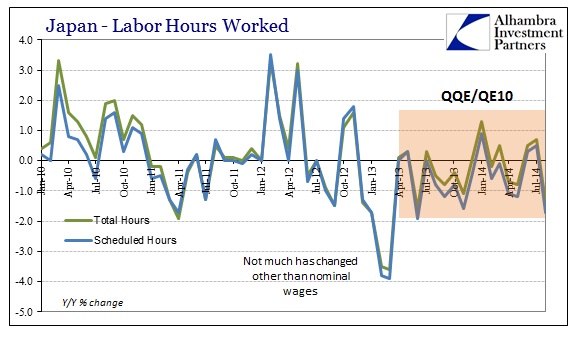 Given the close association of spending with wages, it is again of little surprise or mystery that household spending would simply collapse (a result also curious in its omission from Abe’s statement). The dramatic decline after the tax hike has shown no sign of easing, now four months past the expected transition point. 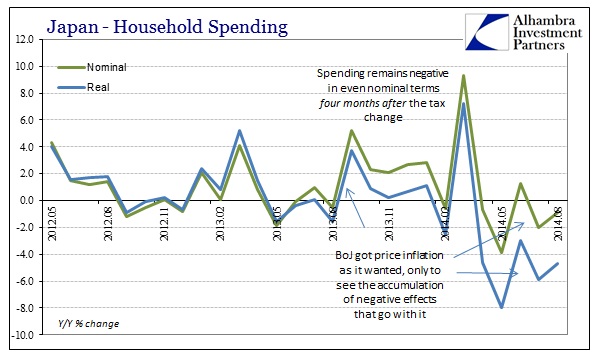 In fact, the erosion (really attrition) in spending is actually worse than the “template” presented at the outset here, as even nominal growth has been negative (except for only June). So two months into Q3 and even nominal spending is declining, let alone any estimate of that adjusted for “wanted” price increases. 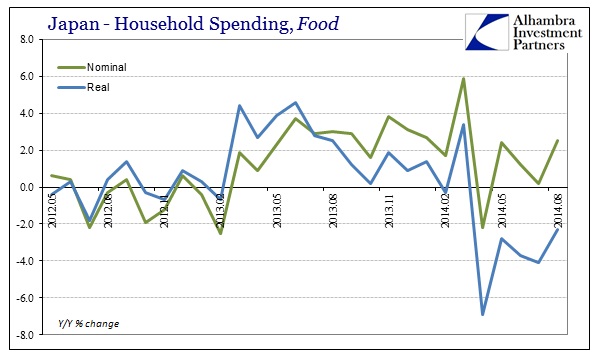 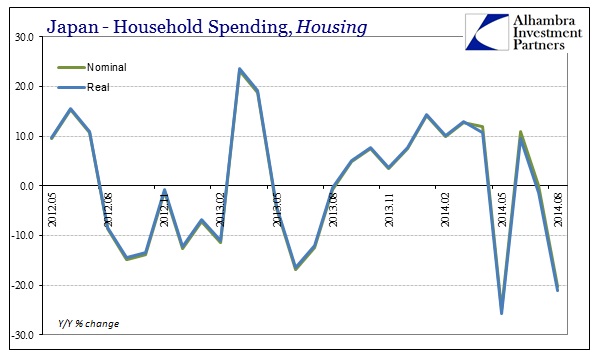 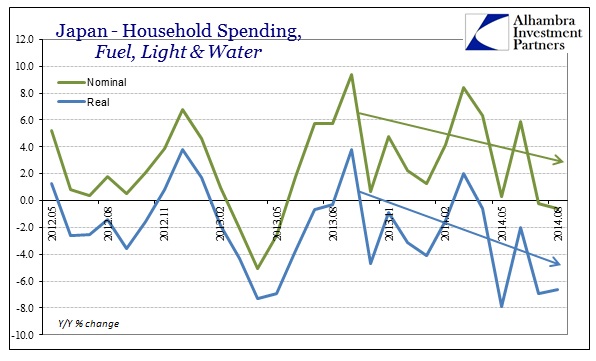 It is worth reiterating the importance of highlighting the Japanese experience at this moment. We see very clearly how monetary influence is not (never) as it is intended, since wages remain far behind and thus spending never seems to fill that “aggregate demand” hole as seen by policymakers and orthodox practitioners. Instead, the lack of productive growth hinders all of it, amounting to nothing more than redistribution which can, in some respects, look to be “working.” But even in that very instance there is always more than a little doubt about “headwinds” or some such.

That description should sound more than a little too familiar to anyone with close experience or observation of pretty much everywhere else redistribution is applied. That includes the US, where wages never seem to match expectations (or even current optimism from “other” labor indications, as Japan) and spending levels permit nothing more than convoluted explanations for why it doesn’t match. The truth is redistribution makes whatever system applying the pressure poorer for the effort. That is more evident in some places than in others at this moment, but without wealth and productive profitability there is little ultimate chance of anything else anywhere.