Jobs Nobody Wants Or Jobs That Just Don’t Exist

Jobs Nobody Wants Or Jobs That Just Don’t Exist

The latest August figures for the JOLTS companion to the payroll climate continue to raise the possibility of statistical corruptions. Back in June, the level of job openings suddenly and very sharply spiked upward. That was used as confirmation of the ongoing surge in employment, but without attribution as to how closely job openings relate to payroll indications through the use of CES in setting both.

Now, on the other side, the rate of hires has fallen in August rather sharply in contrast to job openings. The opposing directions have left this divergence greater than anything seen going back to the first estimates at the start of this century. There is no clear interpretation as to why there would be such a sharp difference in trajectory. 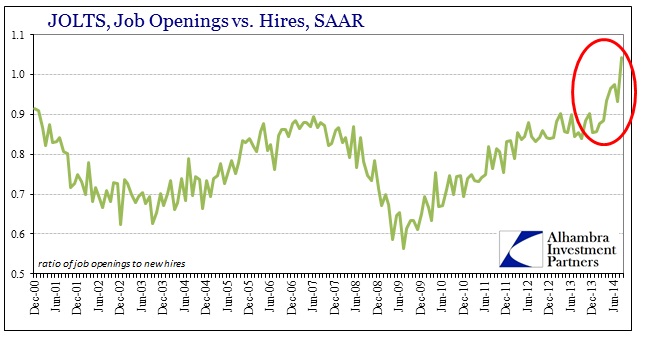 Job openings tend to be more volatile with clearly more exaggerated movements, but nothing to this degree has occurred yet nor is there again any obvious reason for it to happen now. I think this adds to the notion that there is a miscalibration in the employment statistics as the degree of dichotomy here and the speed at which it was achieved argues very much in favor of that interpretation. These hyperbolic results have left the realm of simply curious behavior and entered the possibility of pure statistical anomaly. 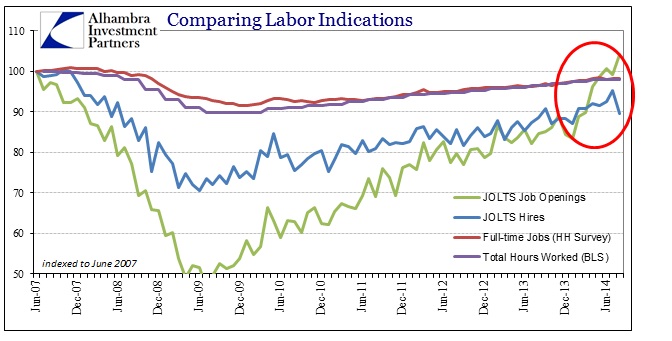 Nowhere is that more apparent than in the behavior of the labor force. If job openings had surged in what is nothing short of an historic employment euphoria, why has the labor force shrunk during that very same period? It does not make any sense intuitively or even in the narrow realm of mathematical regressions. People tend to respond favorably not in wide and deliberate discouragement to a rash of job openings, particularly to this assumed degree. 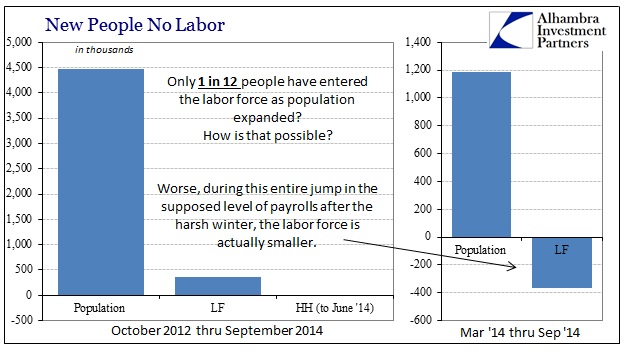 The only possible answer that preserves the statistical validity of all these divergences is that the job openings are for the “worst” and most low-paying opportunities that are so bad as to be not worth the effort to move into the labor force. That might explain, under this interpretation, why hires have lagged openings so severely since the jobs are advertised as open but nobody is actually applying for them. That case still leaves the economy in just as bad a situation as if those openings never existed; if all we are getting are jobs nobody wants to take then there remains an unaltered state of clear dysfunction being driven by the “wrong” set of economic factors (redistribution chief among them).

I think while that may be possible, the simplest explanation remains that the job openings estimate, like the Establishment Survey, is measuring phantom activity as a part of the inability of the BLS’s statistics to cope with circumstances not seen since the 1930’s. The labor force is flat or shrinking because there are no real income opportunities out there.