There was some pretty bad news out of Germany last night. The nations’ Economy Ministry cut its growth forecast for 2014 by a third (from an unsatisfying 1.8% to a worrisome 1.2%), which is more than a little coming this late in the year. In addition, the closely watched ZEW survey (I don’t watch it, but “markets” are fixated) fell to -3.6 (from +6.9) for the first negative reading since the last European recession. Needless to say, the talk, actually “unassailable” assurance, of recovery has seen the final nail strike into the coffin.

German gross domestic product shrank in the second quarter and factory orders, industrial output and exports plunged in August by the most since January 2009. The International Monetary Fund last week cut its growth forecasts for the euro area’s largest economy, and French Finance Minister Michel Sapin said the signs of weakness show “no country is immune.”

Like the FOMC’s curiously altering timeline of US growth expectations, particularly as they relate to that ephemeral closed-system concept of “global growth”, Germany wishes to blame “external” factors for the growing duress. Conveniently, Ukraine is close enough in terms of physical location as well as timeline to offer such an excuse. Undoubtedly, there are disruptions relating to uncertainty, including Russian sanctions, but that is not nearly comprehensive enough given the scale of economic transgression.

Again, the idea of closed economic systems, largely aligned via currency systems, is simply false. There is no decoupling though it may appear in transition from time to time, but overall the global economy operates largely in unison. We see that in the nearly uniform relationship of various “markets” as they process expectations and discount information (where not totally blinded by central bank anesthesia intent on covering up any such rough areas).

The persistent talk of the “cleanest dirty shirt” is perhaps the biggest violation of the interconnected nature of all of this. In 2008, the rest of the world was supposed to “decouple” from US weakness in a sort of reverse situation, yet there was no such separation in economy or finance. If the US were to “decouple” from Europe, those areas of US markets with the “best” growth prospects should be on the receiving end of all that “hot money” flow (or even just the regular variety).

Instead, we have gained a very curious “coupling” of small cap US stocks with German stocks. Whereas you might expect German stocks to stumble on economic concerns (though they certainly didn’t anticipate this much in advance like a functioning discounting mechanism would), there is no obvious reason, under the “dirty shirt” assumption, for that to be paired exactly with US small caps. 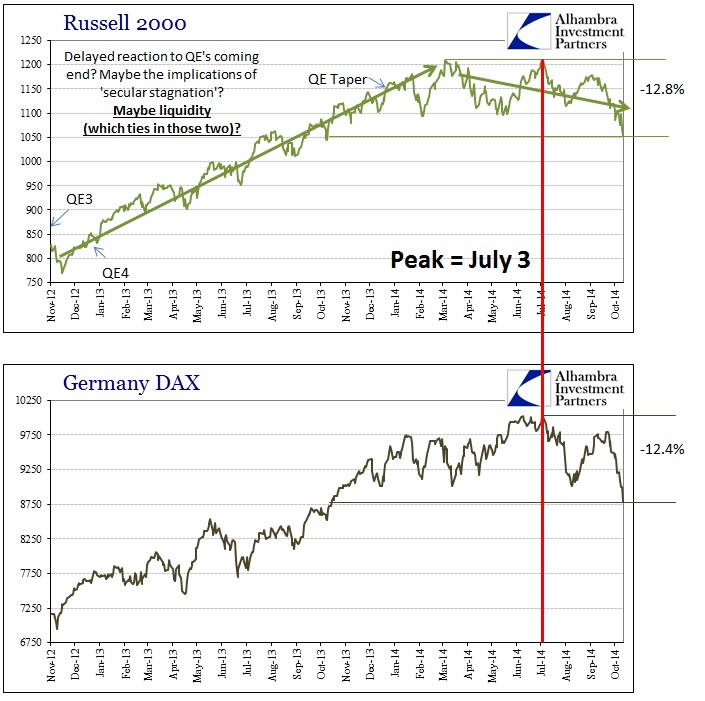 Yet, for all the bluster about closed systems and separation, the Russell 2000 and the German DAX have been “surprisingly” linked in pattern and timing; and even scale. That is made all the more so by the behavior of stocks next door, in France. The CAC 40 index shows much the same as the two indices above, but making its recent high nearly a month prior.

In many ways, that makes sense given that France’s condition is more advanced in terms of decay. Highlighting the smallest amount of discounting possible, clearly “buying” the central bank recovery idea, the CAC started its downward slide right around the time the ECB “panicked” itself into following Eonia lower. The fact that the ECB would, at that moment, slide into negative interest rates on its floor had to have been a blow to economic confidence in the “dirtiest shirts.”

So the economic narrative was probably established then, as clearly stock investors took some note. But then why would it take almost another month for German stocks to get the same message? Perhaps that might have been due to Germany’s position as the “cleanest dirty shirt” in Europe, but the connection to the Russell 2000 offers the best clue. 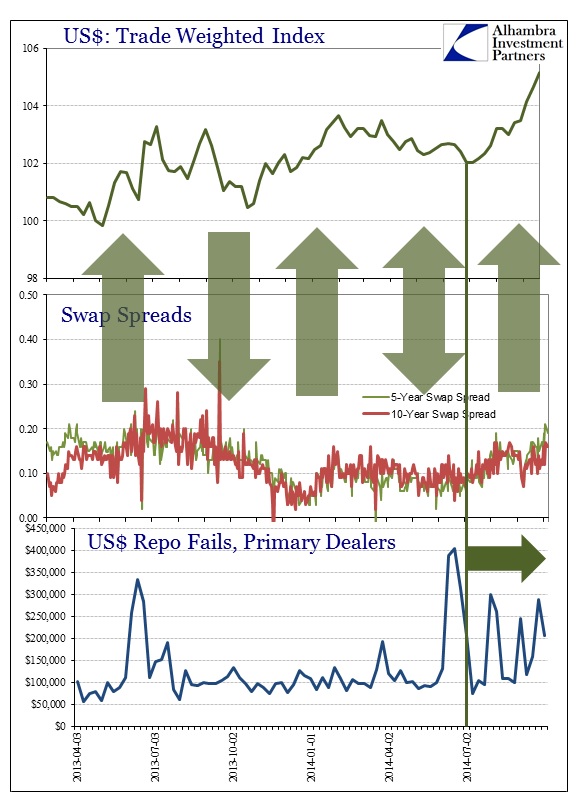 It was the week of July 3 that the “dollar” began its movement. Piecing this together with that framework in mind, it looks pretty conclusive that economic concerns over Europe (triggered by what amounted to ECB panic) began to reduce the amount of leverage on offer globally, slowly eroding through June (hello repo) until it broke in the open at the outset of July. That it would be in European relation is not at all surprising given the still large participation in the eurodollar system (global dollar short) via European channels.

I think there are two implications here directly. With leverage in reverse, markets most exposed to it at the same time as changing perceptions are where that reversal might have the greatest effect. That German stocks are so tied to US small caps more than suggests that leveraged participants are as concerned about US growth as German growth; again, if the global economy is suffering, there are no “clean” shirts. The second implication ties into that, as there is a clear disparity with larger caps in the US. That would seem to suggest, certainly to me, the net “input” from stock repurchases offering that separate leverage channel to maintain prices regardless of fundamental factors (both discounted expectations and financial “flow”).

All of this, in summation, seems to support the idea of shifting sentiment set against a deficient backdrop of global liquidity – both of which are, I believe, the keys to the bubble. These financial arrangements demonstrate very well that Europe is not walled off from the US, any more than both from Japan or China. That Brazil is in recession is not just a statement about Brazil, but of Europe, the United States, Japan and everything in between. The “dollar” reflects that as leveraged participants everywhere are “forced” to be less so.