Pity Them: Sweden Relents To Krugman

Pity Them: Sweden Relents To Krugman

We have clearly entered unchartered financial and economic terrain, a sentiment that applies so broadly as to lose almost all meaning. In fact, the world has strayed off the beaten path for so long “we” have little memory of what “normal” actually feels and looks like. The latest figment toward that direction is the growing errors of orthodoxy as it relates to Europe. Sweden’s central bank, Riksbank, seems to now be setting its monetary policy via Paul Krugman’s criticism.

The “problem” for Sweden is the same problem for Europe, as the two are inseparably tangled in economics and even finance. Such reality contradicts orthodox economics, and thus all their prescriptive measures, that depends on a closed system approach – that Sweden in general, and Riksbank in particular, can set its own course in a vacuum.

As is well-known, economists detest “deflation” as the worst economic condition, and only partly because of their distrust of common folk. As it is, Sweden has seen consumer prices fall in 16 of the past 24 months (we could be so lucky). Riksbank began to raise its benchmark repo rates four years ago to stem the flow of “capital” into its housing sector. And small wonder that they were so concerned about a housing bubble given that “money” came out of a Europe then in desperate trouble seeking shelter from the euro.

Since the Swedish central bank stopped its rate hike program in 2011, consumer prices have fallen in what these orthodox economists are seeing as correlation and causation.

Stefan Ingves, the Riksbank’s governor, has come under pressure from the likes of economist Paul Krugman for lifting rates in 2010 and 2011 to counter what Sweden’s central bank saw as a risk of a housing bubble. Mr Krugman called that policy “sadomonetarism”, as unemployment remained above the historical average and inflation was weakening.

Is it likely that “deflation” in Sweden is a Swedish problem alone, of its own interest rate policy? Perhaps a look toward Europe (and the US) would be more appropriate, especially when setting aside the ludicrous recovery narrative that plagued projections particularly during this “deflationary” period. The problem of Swedish economics is more that Europe never recovered at all, and therefore has been on a slow trajectory toward economic decay as much as the rest of the Eurozone bloc. Economists can ignore it all they want, but the track of inflation in Europe (official measures ignorant of cost pressures) is “curiously” similar to the track of official inflation in Sweden (and the US, for that matter). 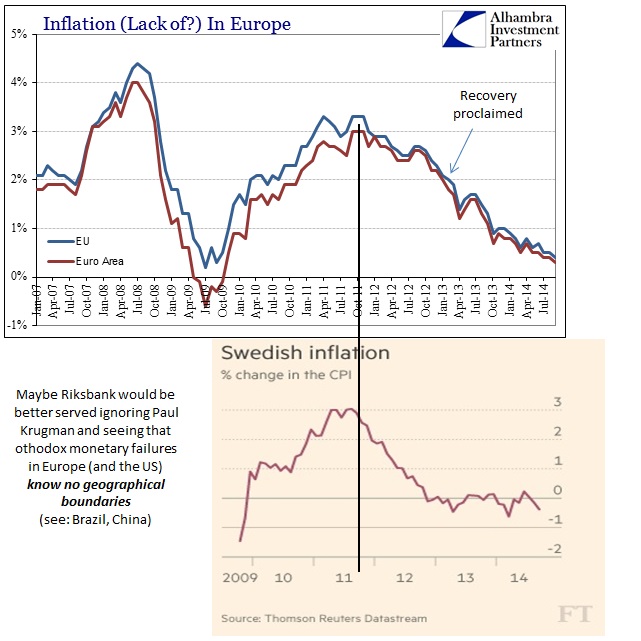 That would place Sweden alongside Japan as a candidate to do the most harm to its own economic system. After all, the Japanese in embarking upon QQE were absolutely and unambiguously sure that “inflation” would cure all economic ills on the island. Instead, the lack of “global growth” has doomed exports at the same time inflationary cost pressures have destroyed consumer standing, all the while hollowing Japan Inc via productive capacity searching for stability elsewhere. Should Sweden follow Krugman’s advice for every developed economy (bigger, bigger and more bigger monetarism), and thus follow the path toward systemic poverty and further impoverishment? It makes little sense in common logic, let alone in everything cited above where Swedish monetary policy is less its own than Krugman et. al. can ever imagine (or model via DSGE).

To that end, Riksbank seemingly relented last night, dropping its benchmark repo rate all the way to zero – Sweden joins global ZIRP. How much longer before Riksbank is criticized into QE, as the ECB?

“It’s a problem for the Riksbank’s credibility that they have to make these adjustments,” said Robert Bergqvist, chief economist at SEB, the Swedish bank. “But they are not alone. We can see many other central banks and countries that are facing similar challenges.”

In other words, now that they have started they cannot stop, particularly as they never actually succeed at anything other than bubbles.

There is a US parallel to this in that the Fed will never be able to admit that its reverse repo program is a total and complete failure toward the aim of achieving a durable floor on repo rates (the world runs on repo rates now, and the reverse repo program is the FOMC belatedly catching up – and doing so ineptly). The problem is that their own intrusion has made QE and monetary policy the single largest factor in liquidity (and a great deal more), so facing the obvious failure and admitting it with a view toward trying something else is impossible; they are captured by their own maladroitness and clumsy circumscribing.

That seems to be the developing theme across the developed world (and a huge problem for the “emerging” world). Central banks have sprung the trap upon themselves where they have no choices left; they cannot admit failure and try something with an actual prayer of success because the simple act of doing so would lead to systemic disorder and disruption. When you try to rebuild the entire economic foundation on monetary competence, and nothing else, the slightest rebuke blows it all up. The only “choice” left is more bubble, with fingers crossed.

These same central banks are now finding that there is no actual method of unwinding, at the same time “markets” are starting to figure out it never worked to begin with. What a wonderful noose they have placed around our collective economic necks.