Recession Is The New ‘Stimulus’

Recession Is The New ‘Stimulus’

WTI is trading below $64 this afternoon and the long end of the UST curve is being bid rather starkly, the 30-year has dropped below 2.90%, there is an important element to consider about such “price discovery.” As my colleague Doug Terry points out, a 40% drop in oil prices is no longer strictly a matter of finance. In other words, the leveraged long players and even the one-way momentum “traders” have long since been vanquished. Speculation is no longer driving oil prices lower (acknowledging that aggressive shorts are certainly in this market now).

Crude oil is unlike stocks, for example, in that there is at some point an actual level of supply and demand for physical quantities. Futures trading sure cloud this distinction, but in the end physical demand and supply will take over against any aggressive move. If financial “traders” push the price down enough, shippers and storage facilities operators will bid because tankers are needed to flow somewhere (either today or, far more importantly, tomorrow, i.e., near future). That is why, as Doug points out, the price of oil may be highly volatile but typically courts a relatively stable range even in this age of currency free-for-alls.

That is why when the price of crude accelerates as it has recently it must be a major point of emphasis. At some point there “should” have been aggressive bids for physical crude heading somewhere, but what location in November and December 2014 demands as much? Japan? Brazil? China? Europe? Gone are the physical “traders” and so oil prices hit what they call an “air pocket” because nobody will step in and buy in quantity. The 15-20% decline that might have triggered a physical accumulation last year at least from storage players is conspicuously absent right now; turning that 20% trend into a 40% (or more) washout.

At this point the idea of “decoupling” enters as if it were valid today in a way it was totally absent in 2008 (the last time “decoupling” was so prevalent). In other words, the global economy may be sinking but the US is supposed to be the bright shining light of contrary good fortune. Thus, less demand around the world is expunged from the domestic trend of rising production and scenarios of import price competition. Of course, I think that is nothing more than the same wishful thinking that drove the 2008 version, but also that it is plainly obvious that emerging market demand for energy is a full part of the lack of forward demand up the supply chain. China may be slowing but it’s not because China is slowing on its own, rather the US is buying a lot less from China (and everywhere else).

In terms of actual energy demand in the US, I’m pretty sure that lower oil prices are consistent with what is taking place here, economically speaking. 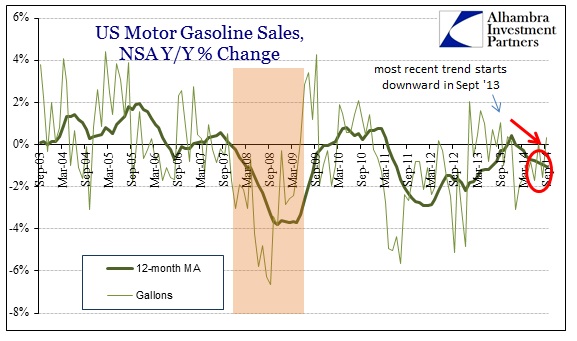 Shopping malls were relatively deserted again this past weekend, defying all projections to the effect. That includes, of course, the circular logic of falling oil prices as it relates to Black Friday and Christmas “consumption.”

…while Societe Generale global macro strategist Kit Juckes came down on the side of the consumer. “Black Friday turns cheaper gasoline into handbags. Christmas spending season is going to be much better as a result.”

Every cloud and all that. “The biggest winners on GDP ought to be the big oil importers – Japan, India and China. But the biggest feel-good factor is doubtless in the U.S., where consumers feel gasoline prices so personally,” Kit added. “And, of course, central banks will be even more reluctant to tighten policy in the face of low/negative (inflation) prints, even if they’re only due to oil.”

GDP is a spreadsheet or regression with variables to be moved around and nothing more to “economists.” How else can you arrive at the idea that rapidly gaining bearishness in markets with trillions and trillions on the line is now the go-to “stimulus?” Maybe the global economy, including the US, will get so bad it will be positively booming.