Most people have at least a passing familiarity with the basic concepts of finance. These are intuitive aspects that count almost like Platonic qualities of “truth”, existing as almost transcendent reality upon which human construction is based. In this particular case I am talking about money and time value.

The reason a yield curve takes the shape that it does is exactly that. The longer the term an obligor wishes to borrow, the greater the rate at which he will pay because there is opportunity cost and greater risk by sheer probability. Only later has financial dogma been attached to try to explain ex post facto the appearance of this, especially the Fisherian concept of stratified “premia.”

Regardless of the mathematics, the upward slope is supposed to be a constant whereby if it disappeared, a perfectly flat yield curve, it would denote a situation where time has no impact on risk. That can only mean the death of “money”, or more specifically the death of basic and intuitive finance.

When the LTRO’s were first introduced in Europe in late 2011, it was not uncommon to see yield curves in specific countries like Germany and Switzerland exhibit this kind of flatness out a few years. Not only were the curves flat but in the case of Switzerland nominal yields were also negative, leading to a flat, negative “curve” that insulted the very animalistic contours of risk.

But that made “sense” in the context of the LTRO’s and was taken as such. The “flood” of “reserves” created a policy window whereby these Platonic rules of finance ceased to function. As the yield curves would find their upward slope usually around the 2- or 3-year mark (at the worst moments), the LTRO’s and its “flood” were thought at least consistent with circumstances that were decidedly less than ideal – “everybody” sort of agreed that is what yield curves “should” look like where the central bank presence is near-total.

The idea of the ECB policy “window” thus extended into the future until the point at which the LTRO’s (and further add-ons) eventually faded, expected to mature and be paid off. In other words, repression for two or three years and then “normalcy” based on an actual and sustainable economic recovery which was taken as foregone conclusion. And that was how it seemed to play out in these credit markets where the Swiss curve, for example, would be highly negative at the 2-year and then pivot up into its more primal, normal appearance. 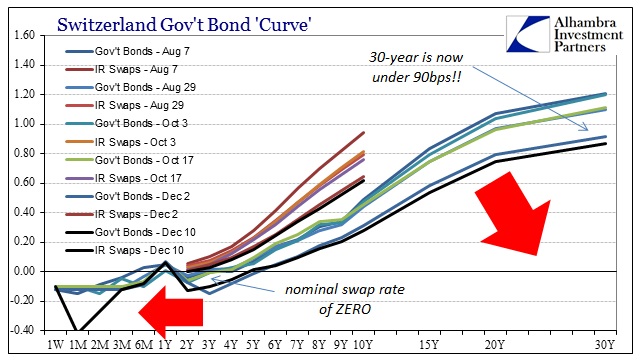 While there was some seeming consistency with that rationalization of curves and the “temporary” disappearance of the time value of “money”, what does that say about right now? This week, with Greece “unexpectedly” collapsing, the European curves are not back where they were in 2011, they are much more distorted. This is not to say they are more deeply negative in terms of nominal yields, they are not (the worst the 2-year in Switzerland traded then was around -50bps), but that the shape is utterly out of sorts; a complete mess.

But there is no LTRO’s at the moment to provide “legitimate” cover for such insanity, no convenient policy window to mask more basic erosion and attrition. The ECB introduced “T”-LTRO’s but so far it has amounted to peanuts. There is no particular reason for the Swiss curve to be negative out to 5-years (FIVE!) and its 30-year (30 years!) bond to trade at an absolutely astounding 0.869% yield. Money is dead in Switzerland, killed off by central banks that do nothing more than strangle the real economy.

Risk is dead because the economy is dead. At this point the traditional narrative is that the economy is falling despite all the trillions from the ECB (global “secular stagnation”). These credit markets are changing that narrative, slowly recognizing that the word “despite” is more functionally accurate with the word “because.” 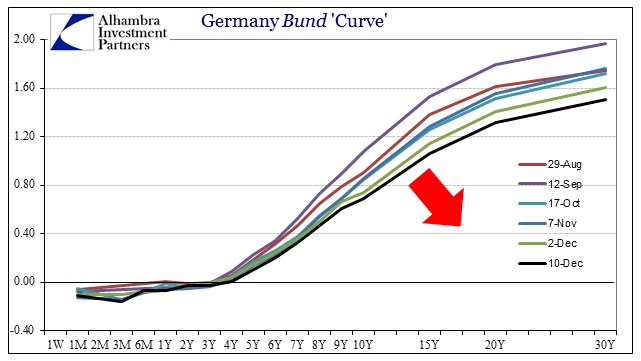 The benchmark 10-year rate in Germany is just 0.69%, a low that defies all common rationality about basic finance. The nominal rates on the curve are at or near zero out to 4-years, again without any central bank activity to excuse that occurrence.

The problem is not European, but rather universal. The death of money in Europe is as it is in Japan or China or even the US. The practice of monetarism is the common strain, the Patient Zero of all this retrenchment (and disease in the first place). When the entire global economy has been girded toward arbitrary redistribution none of this is “unexpected.” A totally flat or negative yield curve is, in fact, the perfect expression of the arbitrary economy.