With Chinese industrial production in November “unexpectedly” weak, coming in at the second lowest rate since December 2008, Pavlov’s dogs are barking again much louder in the direction of the PBOC. It’s not as if this is a one-time dip in production levels, as the weakest growth rate was achieved only a few months ago in August (but the PMI’s!). Talk of a Chinese “hard landing” is now ubiquitous, which supposedly means that there is no way the PBOC will let that happen. 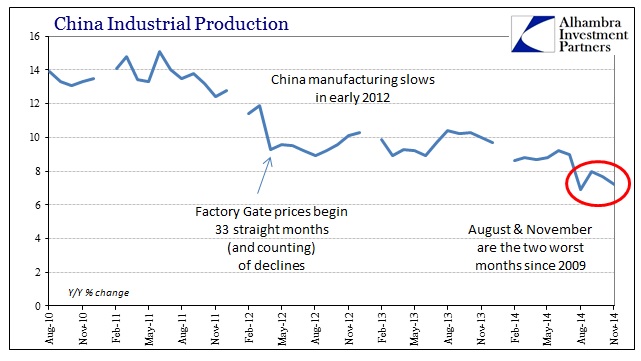 Clearly, there can be no doubt anymore, despite all these same “experts” who said the Chinese economy was poised to take off like the US, that China is heading for trouble. But commentary focuses only on the internal aspects of diminished and recessionary growth rather than taking that to the next step. The comprehensive picture for the Chinese economy is such that accounts for not just the potential downside of domestic bubbles but also why they are there in the first place. 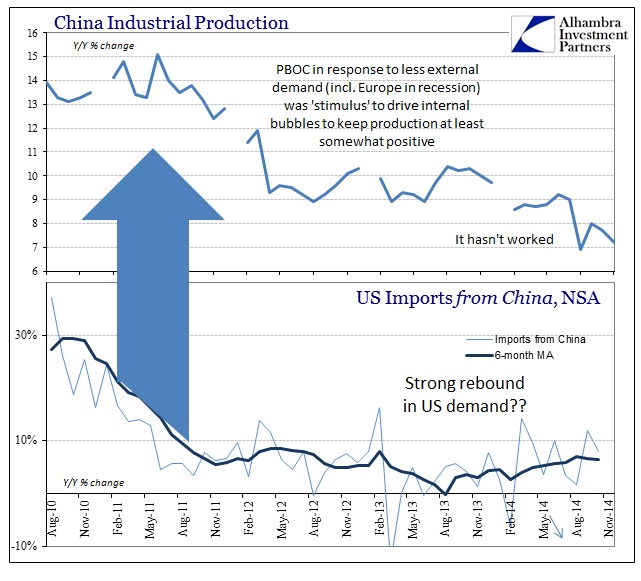 The original burst of PBOC “stimulus” coincided with the Great Recession, which makes sense to the orthodox understanding of “automatic stabilizers.” That is what the textbook says you are supposed to do, but recognizing some limitations. “Pump priming” is not a long-term affair, or at least it is not supposed to be. The initial “recovery” in the US and elsewhere looked to confirm the temporary nature of the recession cycle, as US (and European) demand for Chinese goods seemed headed back in the “right” direction.

The problem thereon, which is what is being ignored in all main commentary, is that late 2011 and early 2012 marked a renewed slowdown after what would amount to the shortest recovery ever conceived. The PBOC responded as in the textbook with another round of “stimulus”, this time only encouraging already massive imbalance toward historic proportions, with the same ultimate expectation – that this was a temporary measure to bridge the divide between recession-like growth and the expected “boom.” 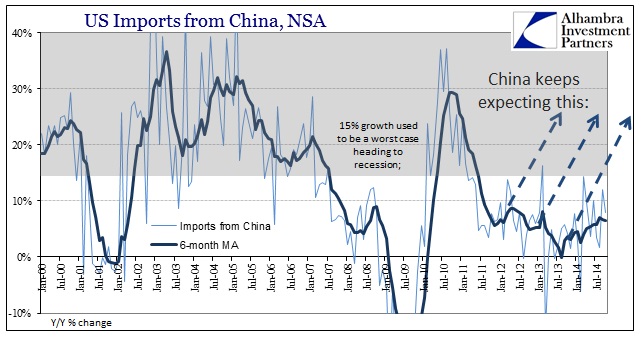 We don’t have to leave that “boom” concept undefined, as recent history does that for us. The prior trend of US “demand” for Chinese production was set by the trends that developed from the middle 1990’s forward, but especially the massive trade imbalances of the housing bubble era in the US. From the Chinese perspective they saw 15% Y/Y growth as the worst case, instead getting very often sustained activity closer to 30% and better.

These are not just arbitrary numbers in a chart, but rather they formed the baseline of expectations that drove production and investment levels in material Chinese activity. The Great Recession was thought a typical but severe economic cycle and that once it had passed the Chinese could look forward to 20-30% again. And they did, in fact, get it but for only that brief period. The activity in 2010 and especially early 2011 only served to harden those expectations, and thus the resolve of the PBOC to tolerate massive imbalance that much longer.

However, those expectations of past growth levels have continuously failed to materialize despite all projections (on both sides of the Pacific) about how great the US economy (and Europe) was going to be just around the corner. That is the essential element in the PBOC’s 2014 “reform” agenda; and it is as much about the American economy as it is the Chinese.

In other words, the PBOC has finally thrown in the towel on the US economic recovery. They recognize that the imbalances (bubbles) they “allowed” and “nurtured” to grow and sustain even minimally acceptable production levels were taken under the false expectation that pre-crisis growth was going to return. Recognizing reality, that the US economy is not recovering, along with Europe, the PBOC has little choice but to shed its commitment to GDP through waste and instead try to manage those past imbalances as best they can.

I’ve said this before but it bears constant repetition; the PBOC begs to differ with the FOMC and orthodox economists in their narrative about the US economy. And they are putting their “money” where their thoughts are, crossing their fingers that it doesn’t end catastrophically. That is a remarkable and amazing shift, one that perhaps oil traders and global bank balance sheet managers (“dollar” supply) have taken to heart? 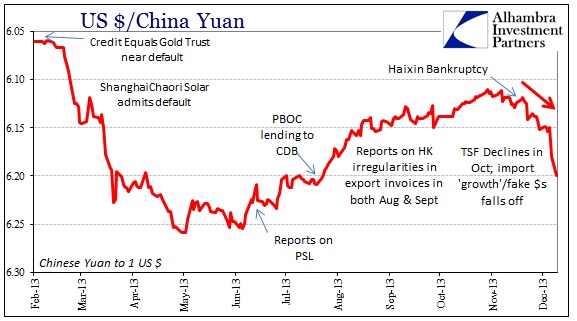