The Nature of Oil ‘Stimulus’ Is Strictly Imagined Math

The Nature of Oil ‘Stimulus’ Is Strictly Imagined Math

It is amazing the speed at which FOMC officials have embraced not falling oil prices but collapsing crude. The pace of the decline is being driven, contrary to the fracking miracle, by the fact that nobody seems to want to bid on the stuff. That is, as I noted earlier, a demand problem.

But officials like Fed Vice Chair Stanley Fischer and FRBNY President Bill Dudley are saying that these lower oil prices, due to lower demand, will end up boosting demand – big time. That is the essence of their argument, that recession is the latest “stimulus.” They are forced all onto one side, as in the price having already fallen without ever addressing, because they simply can’t, why prices have collapsed in the first place. Such relevant material is conspicuously absent:

He also said lower oil prices were “a phenomenon that’s making everybody better off.”

Again, “everybody better off” because everybody is already worse off. That is what happens when these policymakers are forced off script. I don’t believe for a second that anyone at the FOMC, or any orthodox economists, is comfortable with oil prices here. These are people that believe, to their very core, that “inflation” is the primary means to express positive economic growth. Lower oil prices, let alone this 40% breakdown, are anathema to the orthodox way of life. That is why they are forced into this Abbott and Costello routine of embracing the “tax cut” effect of lower prices while maintaining that they can still easily attain their inflation target that hasn’t been met in almost three years.

If we set that aside, however, and just focus on the “stimulus” aspect of energy prices, it is clear that this is something that has been modeled, meaning it is “valid” to the economist (statistician):

The lowest oil price in four years will provide stimulus of as much as $1.1 trillion to global economies by lowering the cost of fuels and other commodities, according to Citigroup Inc.

The problem with regressions is the assumptions you make about independent variables and error terms (the essence of chaos theory and fractal geometry). The estimate provided above is another example of the greatest deficiency of econometrics, ceteris paribus. In other words, all else equal, falling oil prices are a boon to consumers. That is essentially the Fischer/Dudley stance acted out in incomplete math – incomplete because ceteris paribus doesn’t address, like Fischer and Dudley, why oil prices are falling in the first place.

Instead of providing a “tax cut” –like effect, oil prices are recognizing economic “anti-stimulus” (recessionary forces) which far overwhelm any crude (pardon the pun) benefit. 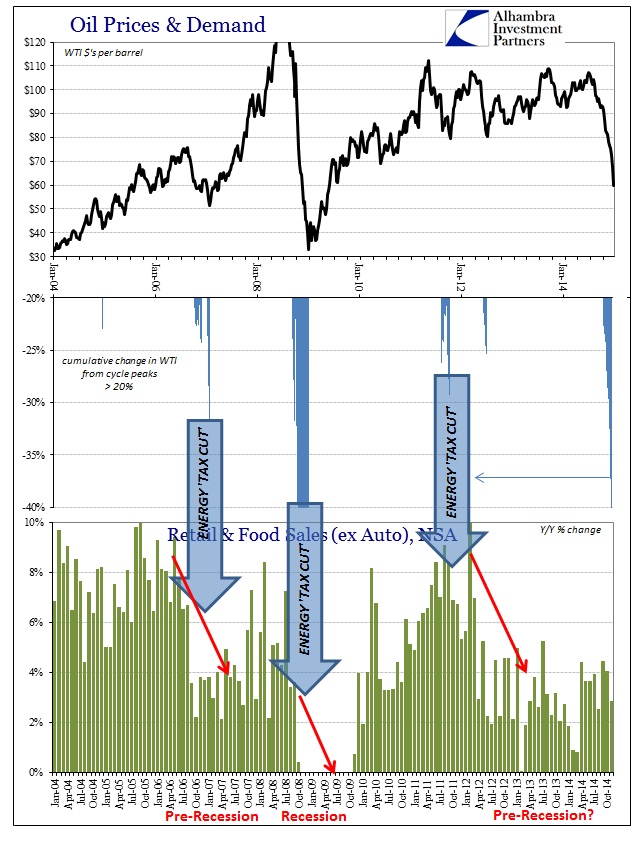 That does seem to be the case in US history, at the very least. Every time oil prices fall significantly the “stimulus” aspect of that is nowhere to be located. That is most evident during the worst of the Great Recession itself, as oil prices imploded, falling by almost 80% at the bottom. Despite that massive “boost” to consumer discretion, and the one that preceded it by two years, we saw the worst economic contraction in three-quarters of a century. The recent decline in oil, both WTI and Brent, is on par only with that decline having far surpassed anything else of the past decade (and about matching the decline in oil prices during the dot-com recession).

For an economist, ceteris paribus is meaningful; for the real world the rest of us inhabit, whatever small “stimulus” is provided by the collapse in oil prices is diminutive to the point of irrelevance by “whatever” is causing that decline in the first place. Some are still trying to make that a supply argument, but at least the bond market is not “buying” it. 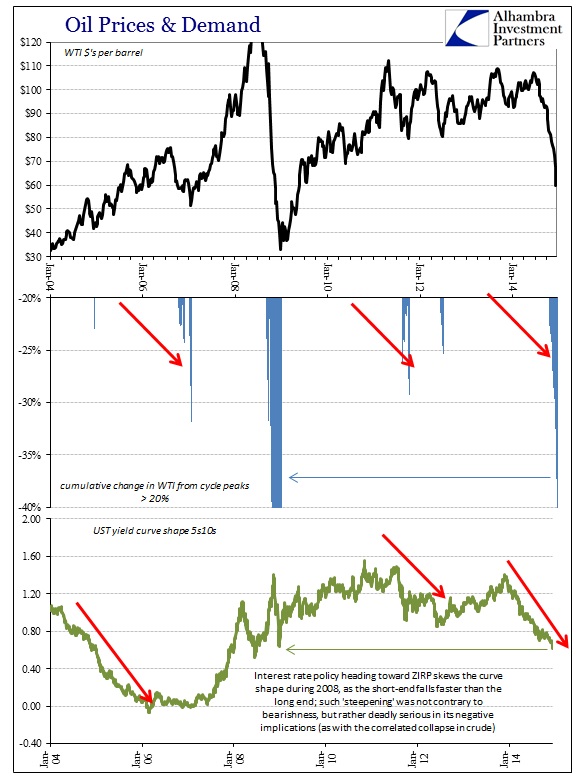