Though they still refer to “supply” in almost every written piece about the recent oil price action, it is now more of a background note. Instead, the narrative is being forced by reality to adjust. Finally recognizing the role of demand in oil prices, the excuse morphs into “it’s only temporary.”

Global oil markets are experiencing “temporary” instability caused mainly by a slowdown in the world economy, Oil Minister Ali Al-Naimi said, according to comments published yesterday by the Saudi Press Agency. He reiterated the country’s intention to maintain output amid plunging prices.

That isn’t what “they” said only a few weeks ago, as again it was supply, supply, supply. The crashing in December of the eurodollar system has meant that there is no way to ignore or distort the role of falling (disintegrating, really) “demand” for crude regardless of who is supplying what.

Steady global economic expansion will resume, spurring oil demand, Al-Naimi said, leading him to be “optimistic about the future.”

Nothing to see here, move along? We should all be forgiven if we express doubts about the Saudi’s abilities toward global economic forecasting. Like orthodox economists, none of the bunch saw this now-admitted “demand” problem coming, as the expected “unexpected” leaves them in scrambling disarray yet again. The basis for this end to the “unexpected” temporary drop in demand is not drawn from any market prices but rather Janet Yellen’s now-considerable philological fluidity.

The Fed is confident about everything so the Saudi oil minister stays with the program even after conceding rather spectacularly markets aren’t. When that inevitably falls apart in the months (weeks?) ahead, there is the next excuse already in place.

“The Saudis have shown themselves to use oil politically throughout their recent history. They’re quite good at it; they think of oil as a strategic commodity and kind of their key lever of influence globally,” says Bronson, a senior fellow with the Chicago Council on Global Affairs.

So the Kingdom with highly flawed economic forecasting will be attributed near-perfect political skills in using the “unexpected” decline in world economic fortunes to squeeze their competitors. They didn’t see falling prices coming, but they knew it was coming enough to be ahead of the curve?

Failing that excuse, there is always 1982. There are those that are already saying that the crash in crude is indescribably good across the board. It is not demand, though it is demand, so much as it is a return of global stability after so many years of currency distress. In the early 1980’s the end of Great Inflation saw a massive and sustained drop in oil prices as economic stability reigned for however long it took to convince oil traders it was real and permanent (with monetary policy taking credit for it by fomenting untold future bubble disasters).

I suppose in many ways that is more consistent than either the “it’s all supply” argument or the “the economic drop is serious but temporary” counter-refrain, but I’m not sure how anyone outside of the class of global policymakers and their parrots in stock markets would believe as much. The one description of the financial world in December 2014 that fits least among all others is “stability.” The early-to-mid 1980’s was not engulfed with half the world already beset by what could fairly be called biting depression and currency disasters driven, mainly, by the “dollar.” 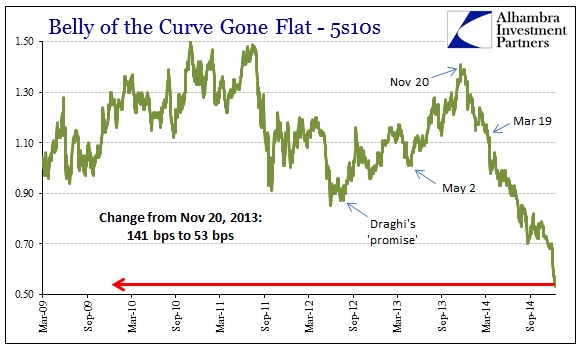 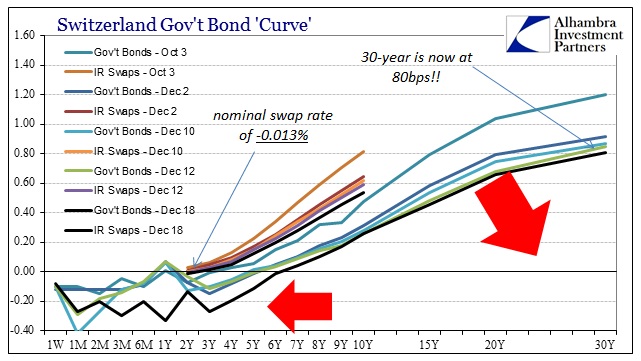 And the economy at that time when oil prices were declining precipitously was unarguably booming in almost every corner (outside those adhering to Lenin to the bitter end). In other words, “demand” was high and going higher but prices fell, meaning that the important part of oil prices then was dollar stability. Good luck selling that to WTI and Brent traders at this moment (just look at the futures curve for either).

So the supply explanation has been superseded and the “expert” class wishes to move on to “temporary” reductions in global demand. It will be interesting to see how long that lasts, especially given that credit markets have been in this mode for thirteen months and counting. Crude prices are actually late to the game.