As my colleague Joe Calhoun continually reminds us, everything that happens has happened before. The ongoing “struggle” to define what is driving crude oil prices lower is perhaps another instance of a past “cycle” being reborn. With oil prices now heading much closer to the $40’s than the $60’s, consistent commentary is increasingly swept aside.

The move in crude these past six months is now nothing short of astounding. At about $52 current prices (which will probably move in either direction significantly by the time this is posted) the collapse from the recent peak now equals only past, significant global recessions under the oil regime that began in the mid-1980’s. 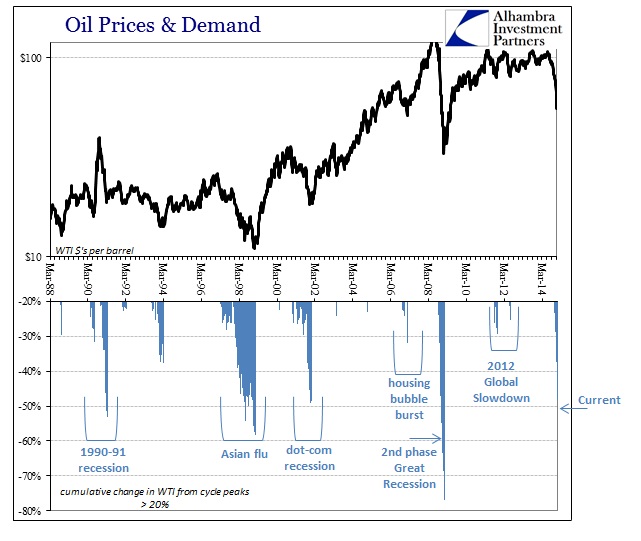 That comparison includes the 1997-98 Asian “flu” episode where the mainstream convention was also totally convinced of only massive oversupply defining price action. This was incorporated even into the International Energy Agency’s (IEA) estimates of oil inventories, as described shortly thereafter by certain incredulous oil observers:

Fourteen months have passed since the International Energy Agency’s oil analysts alerted the world to the mystery of the “missing barrels.” This new term referred to the discrepancy between the “well-documented” imbalance between supply and demand for oil and the lack of any stock build in the industrialized world’s petroleum supply. In April last year [1998], the IEA’s “missing supply” totaled only 170 million barrels. At the time, the IEA described this odd situation an “arithmetic mystery,” but assured us that these missing barrels would soon show up. As months passed by, stock revisions occasionally too place, but often in the wrong direction. Rather than shrink, the amount of “missing barrels” grew by epochal proportions.

By the publication date of the IEA’s April 1999 Oil Market Report, the unaccounted for crude needed to confirm the IEA’s extremely bearish views of massive oversupply of oil throughout 1997 and 1998 ballooned to an astonishing 647 million barrels of oil. Two months later, the IEA’s June report still presumes that 510 million barrels of oil is still “missing”, and the IEA has officially opined that it all resides in the un-traded storage facilities in the developing countries of the world.

As the author of that analysis points out in another piece, those “un-traded storage facilities” being blamed were sometimes ridiculous notions, such as “slow-steaming tankers”, South African coal mines or even Swedish salt domes. In other words, the idea that there was this massive oversupply of oil production driving the almost 60% collapse in global crude prices in 1997 and 1998 was total bunk. Instead, what was driving prices lower was the simple fact of supply and demand balancing to achieve a physical clearing price.

That meant, in the broader context far and away from Swedish salt domes, the price of oil was really trading on the collapse in global demand for it. The Asian “flu” was not simply a financial panic among “unimportant”, far-flung isolated economies of tiny nations, but rather a global slowdown across nearly every economy – to which sharply lower oil prices simply confirmed. Despite commentary of the dot-com bubble era, the US was not unaffected which is why Alan Greenspan’s FOMC cut the federal funds target rate from 5.5% to 4.75% between August and November 1998; a rather significant “stimulus.”

As if that was not enough of a parallel, there was also the “Saudi connection” then as now. Many respected observers put forth the notion, as they have in recent months, that the Saudis were behind the price collapse, or were using it to their advantage, seeking to squeeze out new producers. Back in the mid-1990’s that meant more expensive areas in Africa and new production capacity of the North Sea. The Economist published that idea in a March 1999 article titled, Drowning in Oil:

But low prices will gradually put most such areas out of business—especially if cash-strapped Gulf states conclude that the best way to increase revenues is to boost production, which could drive prices from today’s $10 to as little as $5 (see article). The world will then again depend on a few Middle Eastern countries for half its oil, up from a quarter now.

And so today, the Saudis are supposedly up to the same tricks, now trying to drive US shale production out of business. The fact that all those increased marginal suppliers more than survived the Asia flu tells you everything you need to know about this wild assertion of “intentional” Saudi action. It is a convoluted rumor that survives solely because it is convenient to those economists and commentators that refuse to accept these more basic connections.

That leaves us basically once more in the hands of Occam’s Razor, namely that oil prices are falling hard because demand is falling hard. The scale gives us insight into the nature of the slowing of the global economy, to which the US is a full part, meaning that comparisons only with past and serious downslopes is not a welcome development; nor should it be “unexpected.” Mainstream commentary seeks to reject this simple and basic argument because it cannot fathom, predicated on its penchant for nothing but parroting economic “authority”, that the world could fall so deeply into recession once more drowning not just in oil but also “stimulus.” Once you get past the idea that “stimulus” isn’t, logical sense is restored. 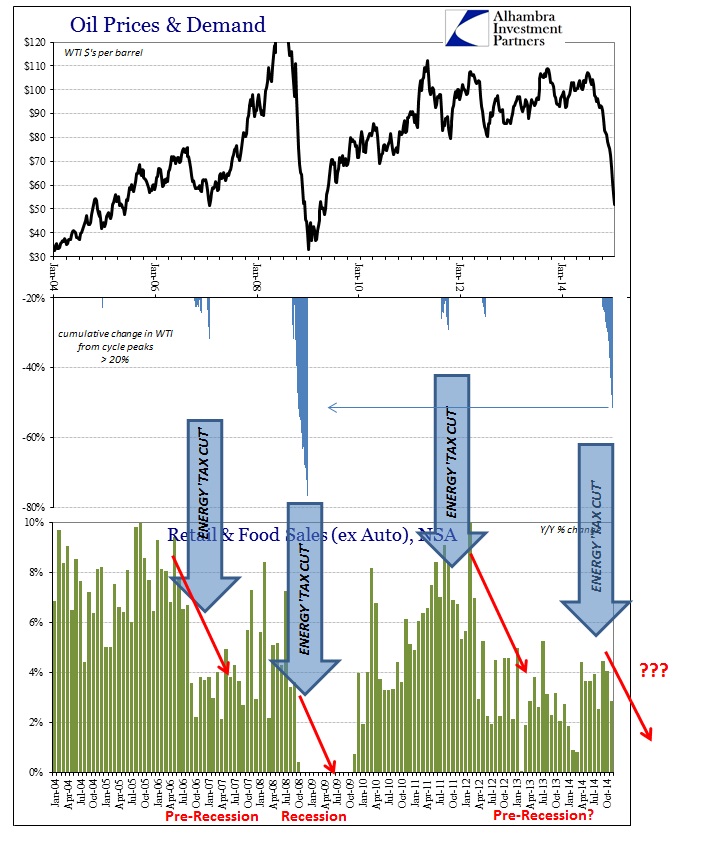