Global Trade Is Exactly That

Global Trade Is Exactly That

In March 2009, only two days after the exact bottom in US stocks, Alan Greenspan took the pages of the Wall Street Journal to declare, declaratively, that the Fed was not to blame for the catastrophe. His “evidence” was based on this single supposition:

The second, and far more credible, explanation [for the housing bubble] agrees that it was indeed lower interest rates that spawned the speculative euphoria. However, the interest rate that mattered was not the federal-funds rate, but the rate on long-term, fixed-rate mortgages. Between 2002 and 2005, home mortgage rates led U.S. home price change by 11 months. This correlation between home prices and mortgage rates was highly significant, and a far better indicator of rising home prices than the fed-funds rate.

Four years after arguing it existed, Alan Greenspan was still by 2009 stuck in the “global savings glut” “conundrum” of long-term rates. He, and his comrade of that time, Bernanke, conjured the idea that there was just too much “savings” in the world as a result of, “the tectonic shift in the early 1990s by much of the developing world from heavy emphasis on central planning to increasingly dynamic, export-led market competition.” In other words, Greenspan is claiming that the he and his FOMC did such a good job that it was too good.

To add to what he assumed was credibility to this assertion, Greenspan quoted Milton Friedman’s assessment of monetary performance:

It is interesting, and somewhat desperate, that Greenspan chooses a glowing review from 2006. It might have been more appropriate, and telling, had he used instead contemporary judgments rather than those at the height (and really the end) of what was then being sold as the Great “Moderation.” The story he wanted to tell in 2006, as 2009, has taken a dark turn since then even though the Great Recession ended and “recovery” began.

The chronicle really is one of the federal funds rate, but not in any way that Alan Greenspan or Ben Bernanke would recognize. There was no “global savings glut” as the increase in available finance for speculation was created and nurtured by that very federal funds rate. Bubbles are not the end result of decades of positive and productive expansion, but rather the intrusion of finance over and far above any rational means to service actual economic activity – the system is upside down as finance rules all now.

What we know of 2006 is all about what they didn’t know, meaning that the Federal Reserve stopped tracking M3 money growth then because they realized it was next to impossible (“too costly” as they justified, correctly). The fastest growing components of M3 were repos and eurodollars, the most shadowy of shadow finance. To this day, nobody knows the size and distribution of global “dollars”, but it sure wasn’t anything to do with “savings.”

The conjuring of “dollars” was based on one accounting regulation, namely that US banks operating in NYC (or foreign bank subsidiaries) could use eurodollar liabilities as their own (with or without a holding company structure), and as such that eurodollars were “real.” That was aided in no small part by Alan Greenspan himself who lobbied and received board approval to end any “capital” charge on eurodollar liabilities in 1990. The global “dollar” complex thus connected everywhere the “dollar” as reserve currency penetrated – which was far and wide. This “hot money” bastardization of the global economy was thus predicated on not decades of decent economic stewardship but rather heightened appetites for bank balance sheet growth in eurodollar markets. 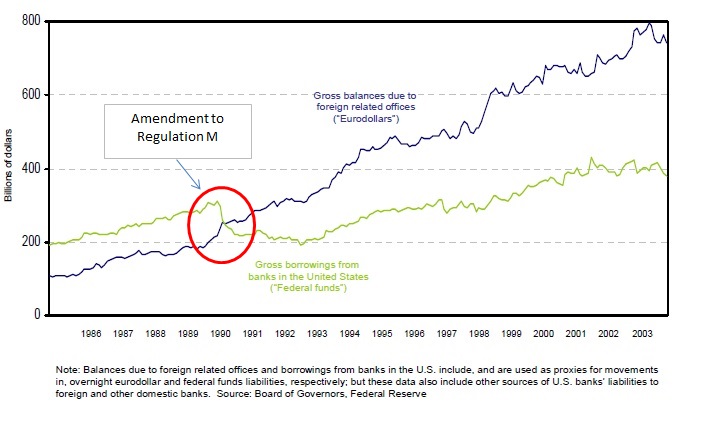 One of the primary “limitations” of that growth (and I use quotations because far from a limitation it was instead an open door) was the federal funds rate, and for more than one factor. LIBOR, the primary eurodollar rate, traded in almost exact tandem with federal funds meaning that the Federal Reserve was running “loose” policy not just inside the US but everywhere. Low LIBOR meant cheap overnight funding, but it also led to a suppression of volatility which, in this regression-ized finance regime, meant balance sheet construction was artificially inflated by artificially reduced calculations of volatility and the all-important correlations (taken into account of VaR, vega, etc.).

We know this intimately by the altered trajectory of housing construction and sales (as well as the concurrent Great “Moderation” constant of serial asset bubbles in stocks). While Greenspan was patting himself on the back for the 1990’s there was the “curious” surge in US housing activity predicated on eurodollar credit suddenly and sharply flowing back into the US (as never intended, eurodollars were only supposed to replace the gold standard in clearing and settling foreign trade terms largely among foreign nations). 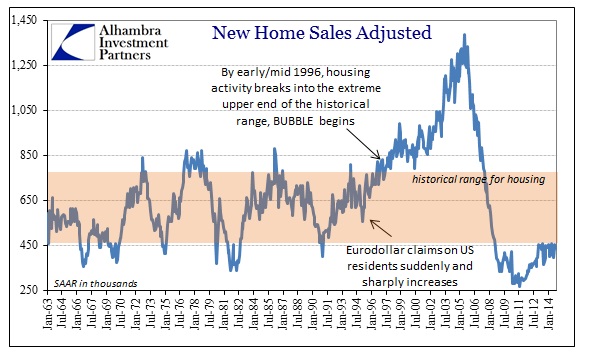 The housing bubble itself was far more of a foreign affair than of Wall Street (who begged to be let in on the game in the latter half of the 1990’s, whining vociferously to Congress that they couldn’t “compete” with foreign banks that were loading up on “dollars” of foreign origin). The global bubble economy was exactly that as it spilled over far and wide beyond just US housing imbalance. 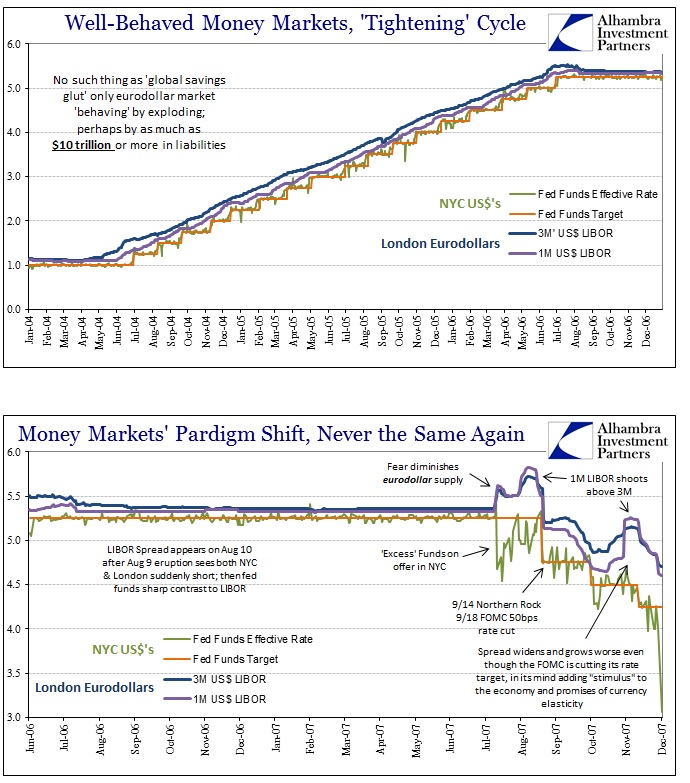 Some seven plus years after this dynamic was revealed in full failure, “they” still don’t get it. “Dollar” finance is proclaiming serious concerns about the very near future, but economists continue about as if there still remains a “global savings glut” that will explain how “deflation” can remain strictly a foreign affair. Japan and Europe may be in the throes of heightened and dangerous desperation but the US is 5% GDP! China’s problems are China’s problems, supposedly. 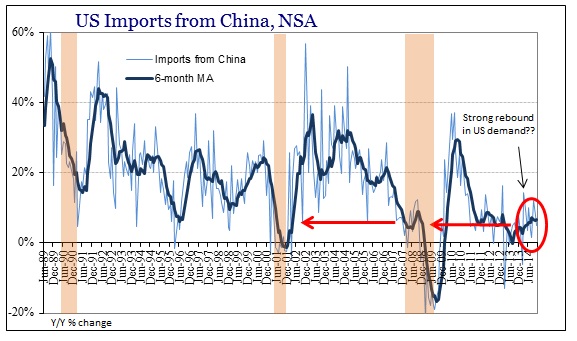 If the US economy had undertaken a period of booming growth, as is constantly used as a description for it, you would expect that the US would be buying and importing at least the same quantity (if not far greater) of goods than it did during the last periods where that description seemed to fit. That just isn’t the case, and this expressed far beyond the shale “miracle.” The US economy slowed in 2012 (starting in late 2011) and has not recovered. That is the world economy that China knows all too well. 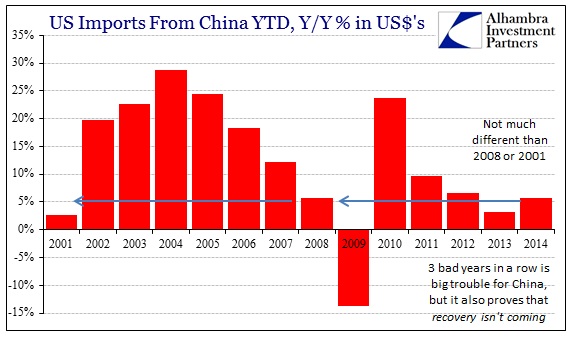 After staking the existential fate of the Chinese government on that US rebound (and Europe too), the PBOC has thrown in the towel on the US economy providing any sort of exit strategy from the bubble paradigm (which the US exported as “capitalism”; a mistake that may doom the appeal of true capitalism by co-opted and ill-mannered proxy). The reflections of the eurodollar market, tightening these past two years, is not of China alone but the global economy as a whole as it fails to heal in exactly the manner Greenspan was wrong. 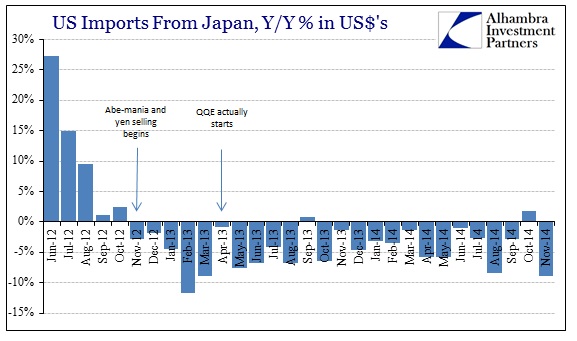 We can add Japan to that fate, too. US imports from Japan fell by nearly 9% in November; the worst showing since the month before QQE officially began. Of course, on the Japanese side, exports to the US gained almost 7% in yen terms which only highlights and emphasizes just how useless nominal interference actually is. 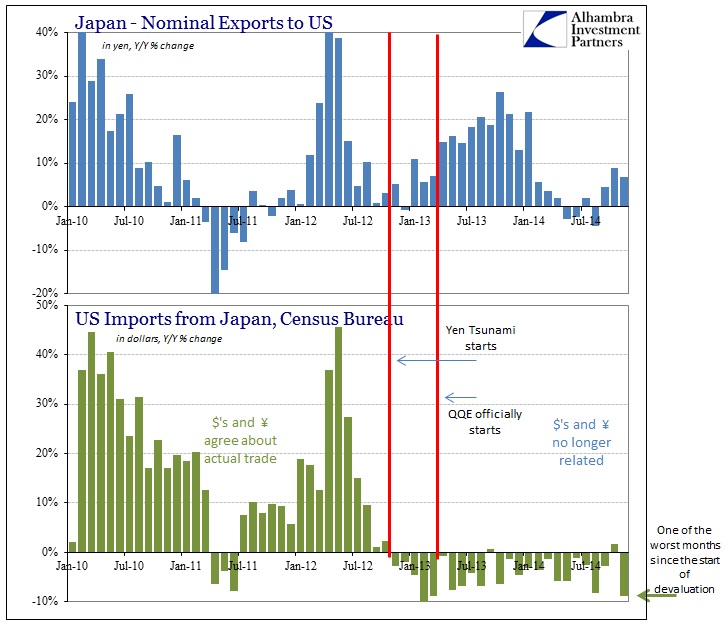 That is the entire point of the last few decades – the global economy goes as the artificial US economy does. If there is “deflation” afoot in the far flung corners of the globe, that is as much a US problem, in “dollars”, as anyone else’s. Credit and funding markets get that; economists are chasing the Easter Bunny.