Of course, the recovery never happened and there has been nothing but growing unease and even open disorder throughout Europe. A great deal of that can be traced to the actions of the ECB itself, particularly its panicked move in early June 2014 to drop the interbank floor, the deposit rate, into nominally negative territory. The action since then has been pretty predictable (except if you are a monetarist).

This morning the SNB “had” to abandon the peg. This wasn’t really that surprising given the absolute disaster that is the Swiss credit markets. As it was, the peg was nearly violated on several occasions, and just in the past week the franc traded at 1.201 euros for five consecutive days before today. 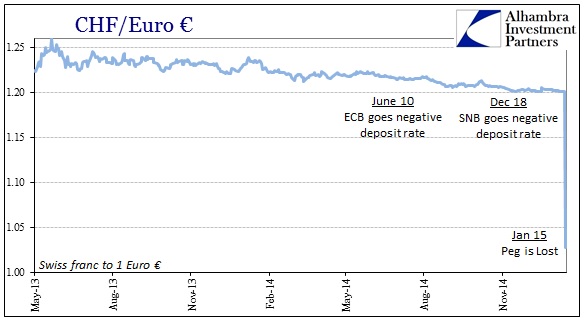 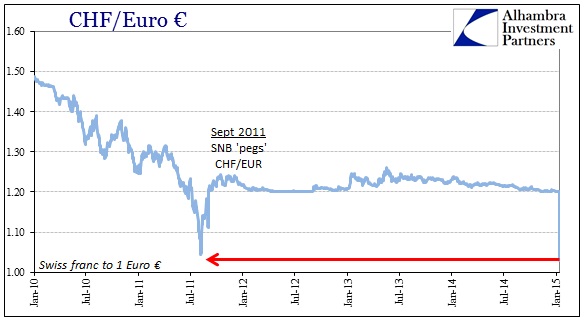 The resulting disarray in financial markets in Europe, even leaking into the US as it “should”, has left an incomplete picture as to particulars about this “event.” Almost all commentary is still focused on the ECB, in this case expectations for massive QE next week, but that leaves out too much in my mind. I don’t want to discount the effects a European QE might have in terms of Swiss disruption, but even that isn’t itself the primary focus for the Swiss.

In the press release announcing a removal of the currency “floor”, the SNB made a point that is somewhat clouded by these arrangements but very clear in the proper context:

Recently, divergences between the monetary policies of the major currency areas have increased significantly – a trend that is likely to become even more pronounced. The euro has depreciated considerably against the US dollar and this, in turn, has caused the Swiss franc to weaken against the US dollar. In these circumstances, the SNB concluded that enforcing and maintaining the minimum exchange rate for the Swiss franc against the euro is no longer justified. [emphasis added]

Notice the highlighted phrase as it more than implies what is important is not the euro but the “dollar.” In short, by tying the franc to the euro the SNB had made Swiss banks’ short “dollar” position as untenable, or nearly so, as those in Brazil or China. As the “dollar” “rises”, gets more expensive in funding, Swiss banks are squeezed in the same manner as their emerging market counterparts – though not likely, yet, which is the point here, to the same degree.

Some of this is the legacy still remaining from the eruption of the eurodollar standard into bubble finance. 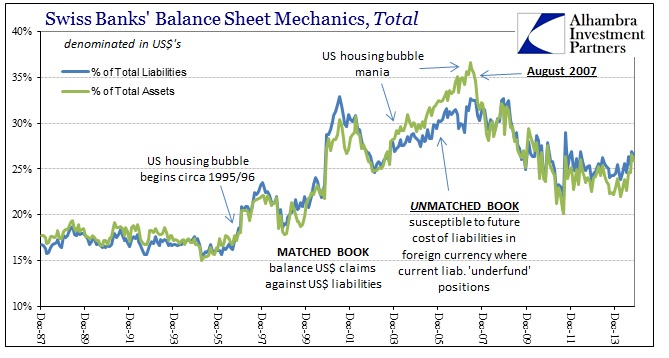 Swiss banks were not just participants in rising eurodollar bastardization, they were a leading member of the imbalance right from the start around 1995/96. However, the “dollar” position in Swiss banks grew well past the more prudent “matched book” strategy during the mania. The manner of increasing “dollar” assets was also a recipe for disaster as Swiss banks were not necessarily lending in terms of mortgages or even MBS into “dollar” markets, but rather were providing additional “dollars” to funding markets interbank. In other words, the Swiss were providing the depth in liquidity (eurodollar) that allowed the bubble to gain enormous size and dangerous, even existential (for them and us), proportions. 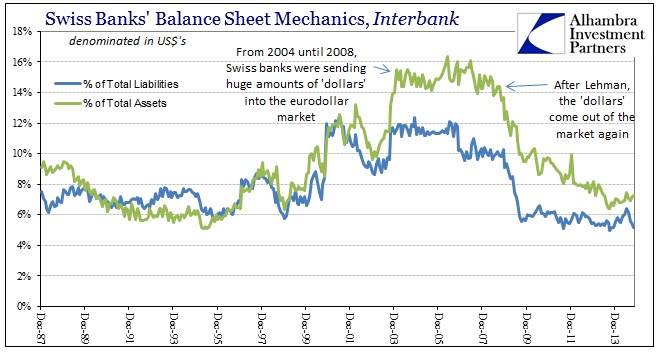 The response of the SNB in the panic of 2008 was highly disruptive, but completely necessary. They essentially forced Swiss banks, especially the Big 3, to shrink and take massive losses, including a retreat from “dollar” participation. For that, the franc added to its reputation for safety and soundness (even if the SNB engaged in a milder form of TBTF). 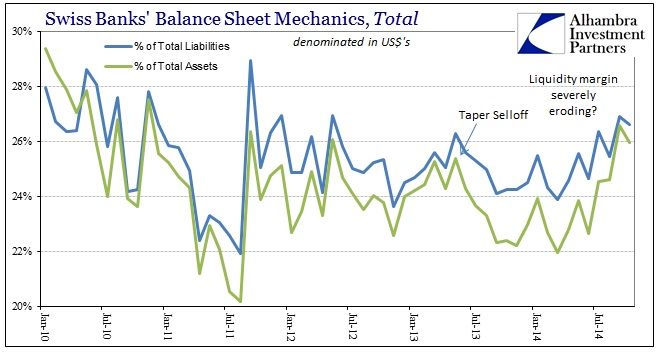 Reduced “dollar” participation on the part of the Swiss financial system is not the same thing as an exit from it. There is still a very significant “dollar” business emanating from Zurich, as well as a good deal of “dollars” heading in that direction. What stands out is the rather sharp rise in “dollar” assets in 2014 against a far more modest rise in “dollar” liabilities. This is very similar to what took place in 2011 just prior to the institution of the peg, but this time it looks like a potential liquidity squeeze in “dollars.”

If that is the case, and these figures aren’t updated far enough to be sure (the latest are October), then “dollar” funding is essentially becoming “too expensive” especially in relation to “euro” funding. The only way to alleviate that is to end the peg and allow the franc to more closely align to the “rising” dollar.

Of course, this is not a pain-free option either, which only heightens the inference about growing problems with the synthetic “dollar” short. If the SNB is willing to tolerate not just this (below) but perhaps much more of it, then there are great “dollar” costs at the center of all this but far less visible: 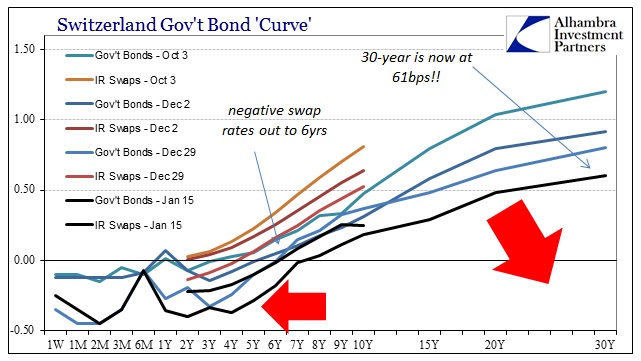 What is interesting from the banking side is that funding in “dollars” has not been as much related to interbank or wholesale activity. Marginal “dollar” funding is proportionally, post-crisis, more in the category of “other liabilities towards customers”, which would suggest on the surface some form of deposit account. I don’t know enough about the exact nature of this liability to offer an informed opinion on the exact function here, but if it is mostly deposits rather than wholesale that may offer a further suggestion as the Swiss “dollar” problem. 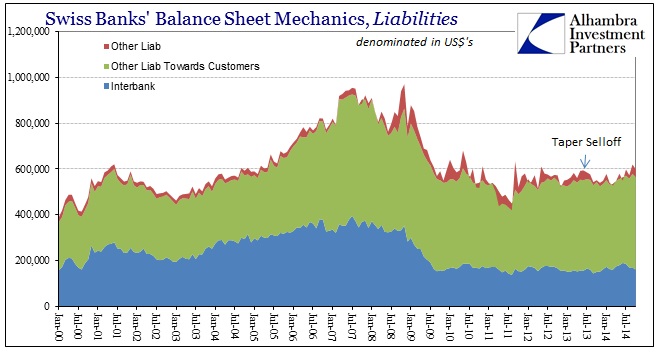 Wholesale “dollars” are much more liquid and, supposedly, available at least in relation to deposit liabilities which are inelastic. So if the cost of obtaining marginal “dollar” liquidity is rising and the only means to obtain them are uncertain and even more costly deposit liabilities, that can be a very big problem for Swiss banks trying to stay within running a matched (or likely over-matched) currency book.

In short, as the rest of the global financial world, it seems as if the Swiss are again running into “dollar” problems that are only exacerbated by the potential ECB QE. In the end it may not matter at all, but the fact that the SNB chose to end the peg and try to offer solutions instead to the “dollar” problem again speaks to relative calculations about the exact nature of the global disorder in 2015 – its name is eurodollars.

In total defiance of the “global savings glut” of Greenspan/Bernanke lore, bubble imbalances are left over as a relic of what they allowed finance and the “dollar” to become. In the aftermath, what a tremendous difference a decade and a depression makes: 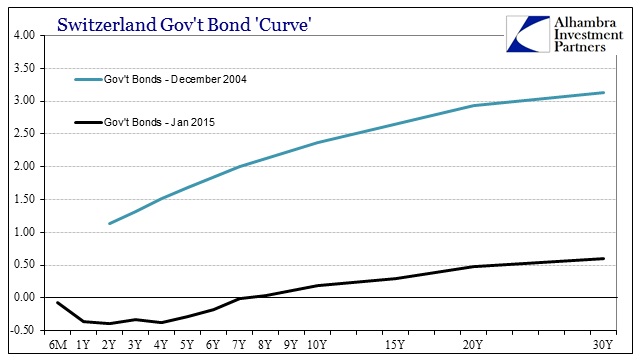