It seems everyone was short the franc (CHF) as a matter of taking monetarism at face value. In other words, it amounted to believing the central party line about the economy and normalcy despite the fact that markets have been increasingly pessimistic about it all and actively and aggressively betting against it. Goldman Sachs is just one of many:

In our portfolios with currencies, we have been short the CHF on the grounds that it was an expensive currency which we expected would experience capital outflows as European growth normalized. We were surprised by the sudden removal of the peg.

The only way to be surprised about the removal of the peg, or even to be short the franc in the first place, was spelled out in the first sentence, “as European growth normalized.” Being short the franc was essentially the same thing as being long the European economy. Given all that has transpired in the past seven or even eight months, there was no shortage of contrary indications that such an assumption was more than precarious and ultimately asymmetric against.

Of course, the counter opinion is the same old “it wasn’t big enough last time but it will be this time.” In other words, the ABS, covered bond buying and negative nominal rates were just the warmup to the real QE event. Unfortunately, that is revisionist as the ECB has been taking intense monetary measures pretty steadily since the day it first announced the original OMT in the middle 2010. The only accomplishment in that time has been an internal recalculation about “the economy” itself. 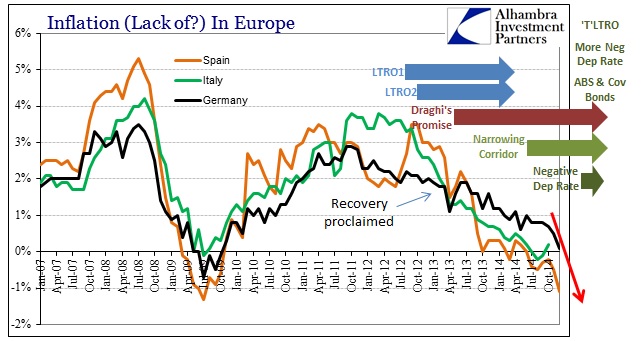 Nothing about Switzerland’s financial system in the latter half of 2014 was anything like a positive interpretation on the state of the European economy. In fact, the Swiss debauchery was as much screaming about the insanity of the ECB and just how ineffective and impotent the entire practical operation was right down to the smallest detail. The most obvious interpretation of the chart below is short the recovery in not just Europe, and not just from the past two days: 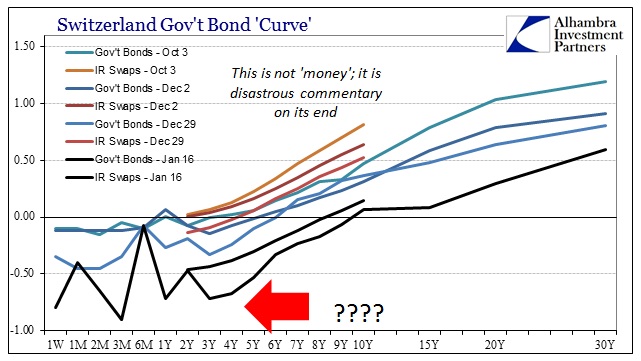 The utter lunacy of the ECB is reaching its inevitable end because lunacy itself cannot create economic, or even financial, normalcy. The Keynesian heart of all of this is that they fully believe redistribution can make for potent economic tonic, but redistribution is at its root a very negative factor. So monetary theory attends to that by placing what it believes are limitations upon its usage and scale; “yes, inflation is bad, but we will only be using the slightest amount.”

And you can easily see exactly what that “slightest amount” gains, as instead the failure of “just a little” redistribution is but added to; and then a little more; and a little more. It doesn’t take long before the constant hold of interventionary redistribution mangles even the most basic of functions in finance – the time value of money (credit). Central bankers will talk about “term premiums” as if that mattered to them in the slightest, rather speaking about such essential market function as if a field researcher gazing upon the rudimentary research subject. The object of redistribution is to kill money as if that will make people spend for the sake of spending. Instead they only kill basic interpretations of “money” and lead that suppression toward unbridled euphoria elsewhere. 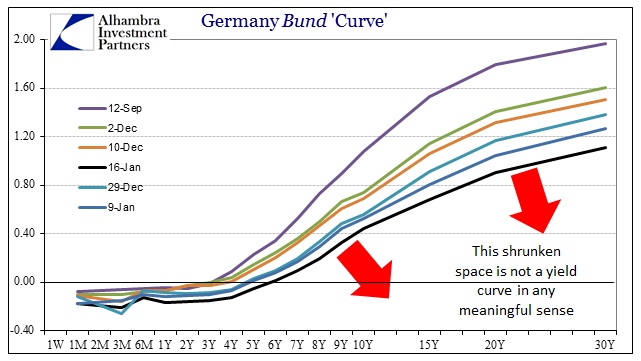 Just in these most basic terms, how low do interest rates have to be suppressed in order for this all to work? Well, if you believe the IS-LM framework then it all depends on the natural rate of interest, which has been “calculated”, apparently, even more negative than it supposedly has been since 2007. To an economist, let alone a central banker, the world is but a spreadsheet with equations that need to be balanced, and if there is no economic momentum than the balancing factor must be that natural interest rate. The more the economy fails to respond to “just a little” redistribution, the more negative the “natural” rate is equalized in the regression; in programming, this is referred to as an “infinite loop.”

Alan Greenspan once queried the FOMC, in mid-2003, about what might happen once the zero lower bound was reached. That thought applied only to the shortest end of the credit space, the overnight rate at which the Fed thought it could control all the rest. In other words, because Greenspan, and the rest of them worldwide, believed that they could exert tremendous influence just from an overnight rate (that turned out to be more anachronistic than anesthetic) the economy’s variability might easily be corralled. That was the primary mistake of all of this, really, in that monetary authorities far overestimated (and continue to do so) their influence and the influence of the tools they used (which were relevant in the 1970’s far, far more than the 2000’s).

It seems these same central bankers, in a mad dash toward proving they have at least some control, are going to take the whole damn thing, bills to notes to bonds, down to the zero lower bound. It started in Japan and has spread now to Europe, where Germany and Switzerland (and Denmark) are seeing negative rates out to 6 or even 9 years. The zero lower bound was supposed to be a narrow and dangerous obstacle, not a universal standard. 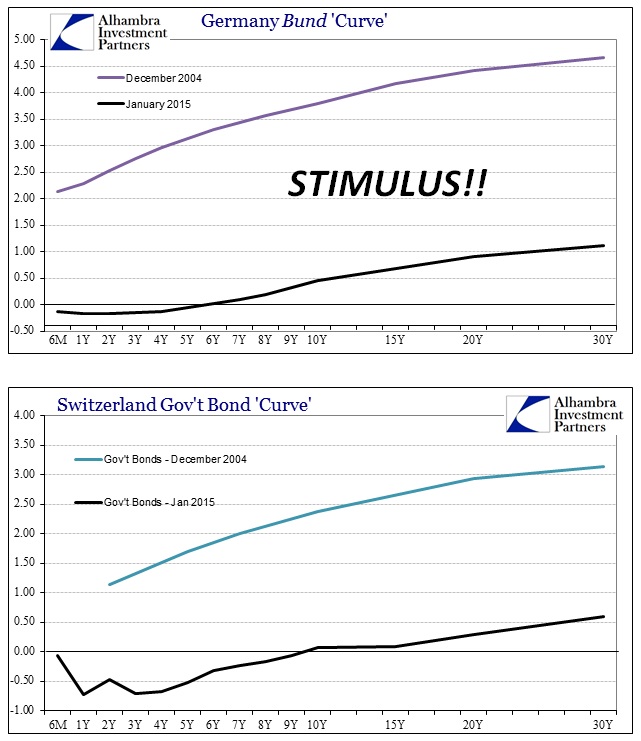