On January 20, the Chinese National Bureau of Statistics released its full-year report on Chinese GDP. The introduction makes no mistake about what the Chinese government wishes to see out of the Chinese economy:

In 2014, faced with the complicated and volatile international environment and the heavy tasks to maintain the domestic development, reform and stability, the Central Party Committee and the State Council have adhered to the general tone of “moving forward while maintaining stability”, seized the momentum of development, fully deepened the reform and opening up, focused on the innovation of macro control, tapped into the vitality of the market and fostered the driving force of innovation. As a result, the national economy has been running steadily under the new normal, showing good momentum of stable growth, optimized structure, enhanced quality and improved people’s livelihood. [emphasis added]

If you think about it, such a statement would not be out of place in an FOMC press release, as there are a lot of similarities between the communists “talking” the economy to a certain level and the Federal Reserve doing it. However, despite the intentions of a command economy, from both, complexity has intruded.

The latest PMI data (FWIW, I have a dim view of them but they seem to extract severe reactions in both directions) from China are not good. Last autumn’s hopes for a sustained rebound have been all but given up by now and thoughts are increasingly (“unexpectedly”) turning beyond probability to severity.

China’s final HSBC Purchasing Managers’ Index (PMI) fell to 49.7, a touch below its 49.8 flash reading, and after dipping to 49.6 in December. A reading below 50 indicates contraction. The data comes a day after the government’s official PMI for January also dipped into contractionary territory for the first time in two and the half years, coming in at 49.8 and surprising market watchers who were expecting expansion.

It has been increasingly evident that the total collapse in commodity prices, including but certainly not limited to crude oil, is actually demand-driven and, worse, is a net negative instead of the tremendous boost that has been incessantly proclaimed.

Ordinarily, cheaper energy prices would be good for China, one of the world’s most intensive energy consumers, but most economists believe the phenomenon is a net negative for Chinese firms because of its impact on ultimate demand.

“Lower commodity prices mean that China’s own energy, mining and metals-processing firms are suffering. And when this big group of firms cuts back on capital spending, demand for machinery and industrial products weakens,” wrote Thomas Gatley of Gavekal Dragonomics in a recent research note.

It is unsurprising, then, to see that the Chinese “dollar” problem has returned, including continued talk about collateral chains in commodity deals. 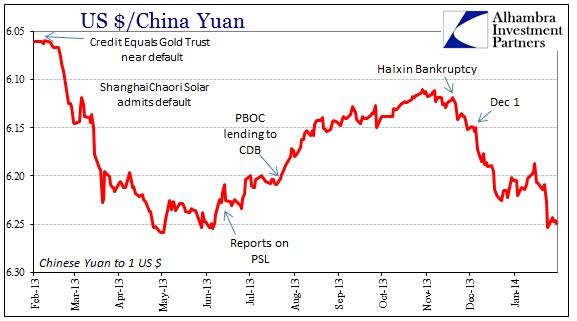 We might finally see if the PBOC does indeed have limits on its “reform” agenda, as the devaluation in the yuan threatens to challenge the currency peg to the “dollar.” If the trend continues, either the PBOC will have to let the peg “widen” (which will be mistakenly reported as an intentional action on the part of the central bank) or finally intervene.

In some ways, this too was inevitable in much the same way as the Swiss National Bank can attest. A “dollar” problem can completely obliterate the best-laid plans. The PBOC is trying to slowly deflate asset bubbles in order for the Chinese economy to find a much more natural and organic footing. The problem is that nobody really knows, after so much sustained monetary intervention, what that actually means. The Chinese government would like it to mean a stable footing has already been found, but without resurgence in demand anywhere else in the world there are too many signals that organic growth just might be too far down. At some point, these could become self-reinforcing and self-referential which would amount to the worst case.

So far, the PBOC has been content to act in its partial favor as the “targeted” approach, but will they be able to continue to do so given conditions? I suspect we are now much closer to finding out their level of resolve.

“If the central bank is not a part of the government, it is not efficient in coordinating policies to push forward reforms,” [Zhou] said.

“Our choice has its own rational reasons behind it. But this choice also has its costs. For example, whether we can efficiently cope with asset bubbles and inflation is questionable.” 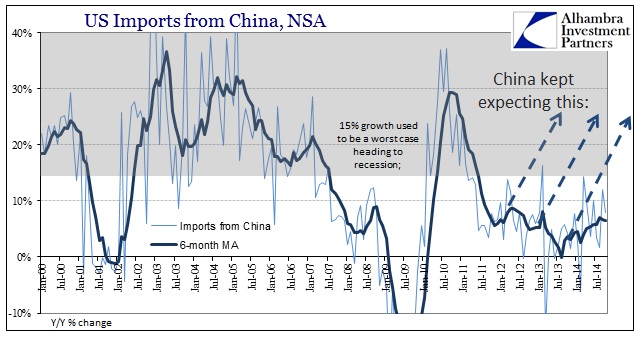 At least mainstream commentary is starting to connect China’s problems to the wider world, including the US, if only accidentally at this point:

Asian stocks started the week on the back foot, as data showing China’s manufacturing sector in a poor state, along with a less-than-stellar growth data from the U.S., fueled worries over the global economy.