Made in the USA

Made in the USA

There is still no evidence that the US economy is doing anything but continued sputtering. This is not news to the rest of the world, however, as the persistent lack of actual American “demand” has been felt nearly everywhere. Domestic economists, and a great many foreign counterparts, continue to see the US as the sole engine of economic hope. But even just writing that doesn’t make sense, as how can every other place in the world be in economic trouble when the one place that drives economic activity in the rest of the world is “booming?”

Most attention as it relates to this deficiency fixes squarely upon China, being conditioned as the world’s economic transition. And that is largely right, as the Chinese sit squarely between end “demand” in the US, Europe and now Japan (thanks to Abenomics) and the resource economies at the beginning of the supply chain. The Baltic Dry and other shipping rates have been absolutely pummeled lately and the only connection that is made in mainstream economic commentary is the PBOC and the Chinese housing bubble.

But even that is derivative. The Chinese housing bubble exists only because China is not the manufacturer of its own “demand.” The PBOC entered heavy monetarism because the US (and Europe) fell into the Great Recession. And then they “had” to do it all over again because the US economy (and Europe) slowed once more in 2012.

The idea of monetary “stimulus” is to create demand for the sake of demand in order to bridge the divide between recession and recovery – filling in the troughs. We know clearly of Chinese “reform” that they no longer view naked monetarism as even a partial solution, having wasted so much resources and getting nothing much out of them. But the second part of “reform” is the admission that the PBOC was building a financial bridge to nowhere; and thus the expected and intended US recovery simply never came. 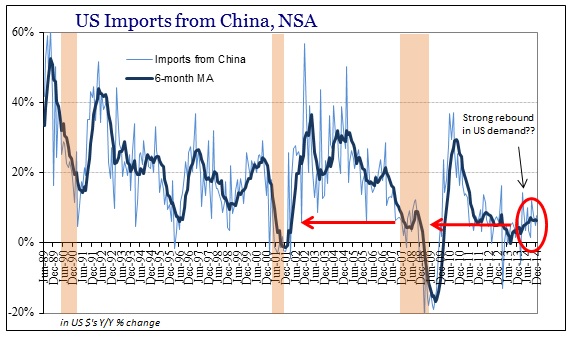 It doesn’t matter how you measure it, the US economy bled in 2012 and has never stopped. What seems to “fool” GDP, as it is constructed in this fashion, is that 2014 was slightly better than 2013, making a relative imprint of only close comparisons, but that does nothing for a Chinese economy depending on actual growth far closer to pre-crisis experience – levels of activity to which the Chinese based their entire economic expansion. 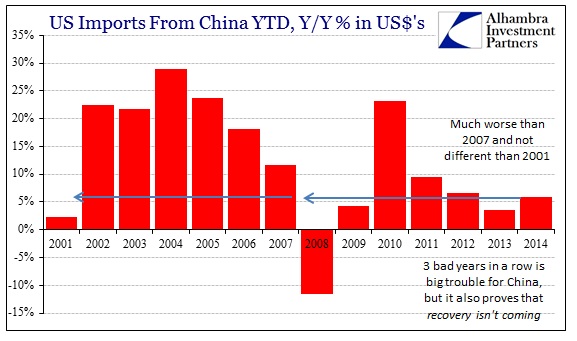 From 2012 forward, demand from the US to China has been running at a consistent rate less than half of even 2007, and only slightly better than the recession year of 2001. These are comparisons that are not just evident unto themselves, but are very much supported by US estimates of its own demand levels. 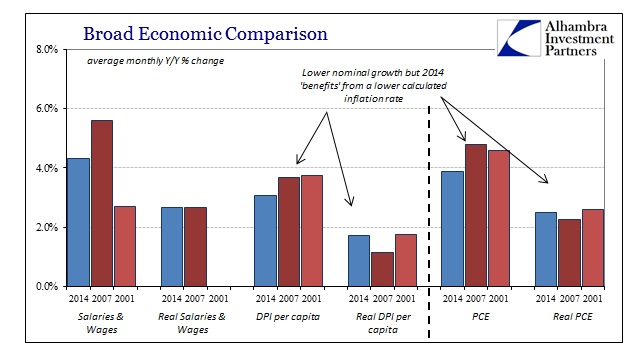 There is no needed statistical magic trick here, as this makes for common sense. If US income levels, and related spending levels, are on par not with a true growth year like 1999 but something much more deficient like 2007 or 2001, it stands to reason that US “demand” for Chinese goods would compare almost exactly the same. It offers a complete and comprehensive explanation as to why the PBOC would have no choice but to engage potentially dangerous “reform” as the Chinese have waited for the US “boom” as long as they could. It just never came, no matter how great the US unemployment rate looks. 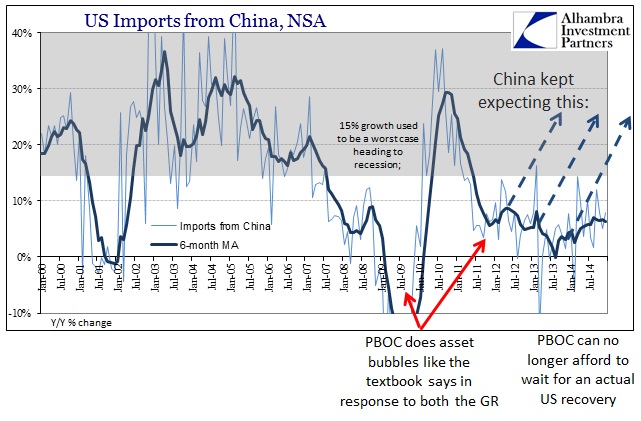 That may offend the sensibilities of those that look to the Establishment Survey and the FOMC’s predictive skills as robustly useful, but these figures show that there is clearly no US appetite for Chinese goods. That is not a reflection, unfortunately, on some reborn “Made in the USA” trend but rather a continued wholesale decimation of marginal American economic expansion applied universally across the globe. 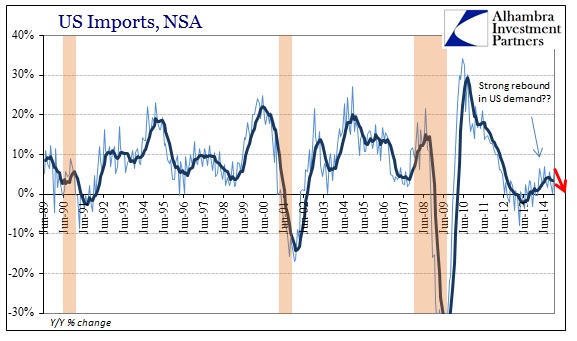 While China is a good proxy of the US economy, it isn’t all that different of all US trade activity regardless of origin. In fact, China may actually be seeing the “best case” from the US economy, as US import activity from the rest of the world is appreciably worse (and not just due to oil as some continue to protest). 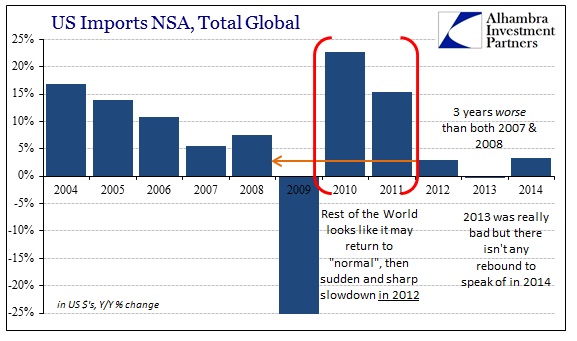 If the global economy is starting to descend once more, there isn’t a mystery about its origins. The Great Recession unleashed a massive tide of monetary “stimulus” that only briefly covered the “trough” before falling apart. That was met at the 2012 slowdown with another round of “stimulus” that failed to do much apart from dissuading the organic cycle from finally completing the heavy lifting of so much leftover imbalance. Any global retrenchment is not just inclusive of US economic degradation, it is almost certainly Made in the USA. 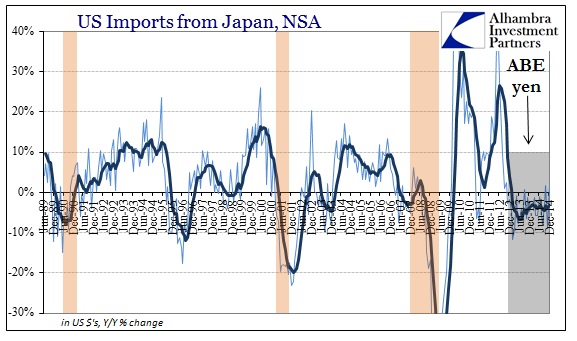 Central banks wasted a tremendous opportunity in 2008, as it was already very painful, to allow markets to reassert conditions that would drive an actual and sustainable recovery. Instead, we are left with fits and starts, the creature of continued instability, that claims not individual economic systems but the unified whole lashed together by the modern “dollar.”