One of the primary criticisms I have leveled against economic interpretations based solely on statistics like GDP is that they are relative in the narrowest sense. GDP especially compares one quarter to the prior, meaning that it is susceptible to those that extrapolate short-term trends. In this current age of monetary elongation in the “business cycle”, that is a dangerous proposition, though it explains a lot, I believe, of why optimistic forecasts never make it past the next quarter or two.

A big reason for that is inventory change, which we have seen inaugurated in several mini-cycles within the latest downturn dating back to the middle of 2012. As such, each year, economists take the increase in inventory as a permanent or at least durable signal of robust expansion – only to see those extrapolations thwarted by something as truly benign as winter (twice now).

So it is again with 2014, which started in concern before giving way again to a mid-year mini-cycle which “confirmed” the finality of the “recovery” at long last. However, since the summer, there has been a marked slowdown in wholesale activity that actually grew more severe the last two months of the year. That means 2014 actually ended on a very sour note. 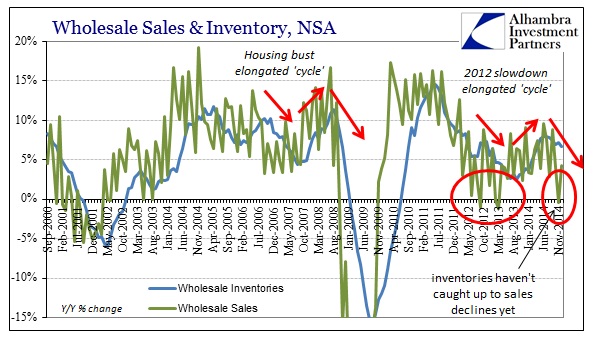 From a longer-term perspective, you can see the problems with something like GDP as it relates to short-term focus. Not only are the mini-cycles evident in wholesale sales and inventories, by historical comparison the 2012 slowdown has left overall growth lacking, remaining significantly below levels of activity consistent with actual and sustained economic growth. The difference is not just mathematics, either, as it means a very real “thumb on the scale” of true wealth creation and thus actual economic progress.

The more immediate problem for the economy in the coming months is that wholesale sales have fallen off while inventories have not. I don’t usually point to the seasonally adjusted figures for reasons that I have made plain in the past, but in the case where even the adjusted series shows an outlier I think it is important to present it. For seasonally-adjusted wholesale sales, the monthly change has been negative four out of the past five months with the fifth month registering basically zero growth. 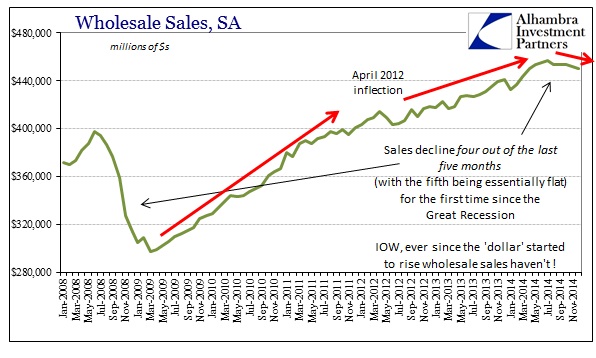 That would mean, in confirmation of the weakness seen in the year-over-year changes in the unadjusted series, there is a serious problem in the wholesale segment of the domestic supply chain dating back to about the time the “dollar” started wreaking havoc (so much for the “strong dollar”). Again, that means that inventory-to-sales ratios are now as high as they have been since the Great Recession, which tends to suggest a slowdown is coming (or has already started). As I said before, I think credit markets had anticipated or viewed this problem correctly around December, with the entire credit complex turning decidedly bearish then – and remaining so. 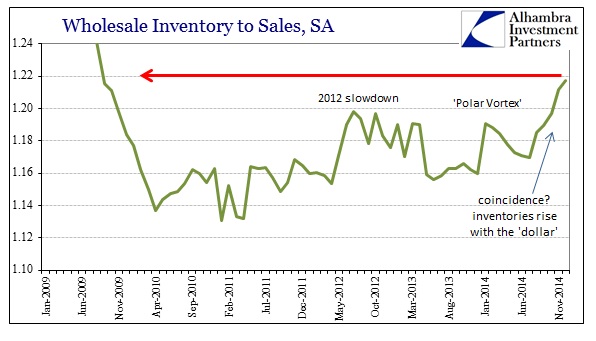 You would expect a gap between inventory and sales in a “recovery” where sales levels are increasing rapidly, however I have to wonder how much of the current gap (dating back to early 2013) is due to artificial interference in companies projecting demand. I am speaking of course about QE and the perpetuity to which sunshine in forecasting is attached to it. Businesses make their pre-orders based on a number of factors, including current levels of demand, but they also take into account orthodox and mainstream projections about the economy (especially the ridiculous Blue Chip Economic Survey, which never met an economic condition it didn’t believe could be totally and permanently improved by monetary “stimulus”). 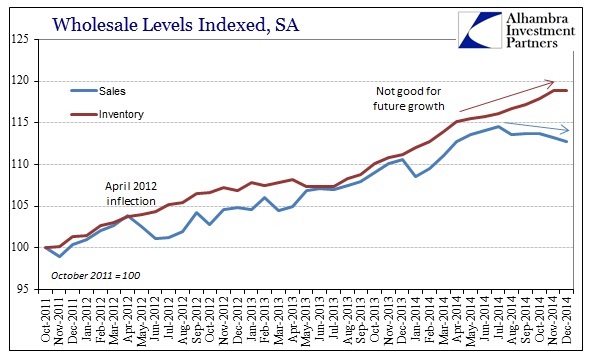 That of course has been fully augmented in 2014 by the constant drone of “the best jobs year in decades” talk, which had to have played a role in at least some businesses taking on additional inventory in anticipation that maybe the Establishment Survey and unemployment rate might finally lead to something tangible. As usual, the only tangible increases have been wholesale inventories, meaning that there will likely have to be a negative economic adjustment at some point in the near future.

Experts across the spectrum see 3.5% wage growth as the key number the Fed wants to see before it raises rates. At the moment, wage growth is only 1.7% annually.

Wholesale inventories have increased since 2012 at a rate that still isn’t quite representative of actual and sustainable wage gains, and yet even that was too much and too optimistic. Once more we see how this economy even at the end of 2014, the year that was supposed to unquestionably end the rather pointless debate about “recovery”, remains not just structurally deficient but perhaps cyclically poised to take a downturn. We will have to see if yet another mini-cycle upturn develops in the months ahead or if businesses finally stop listening to the mainstream assessments. One thing that they will not be able to do one way or another, is ignore the “dollar” as so many economists plead.