Banco do Brasil Denies Its Own Self-Destructive Measures

Banco do Brasil Denies Its Own Self-Destructive Measures

The axiom of most central banking is to “buy time” so that any deemed improper imbalance can be retrieved, set aside and allow for restoration of positive function. Colloquially, it is often referred to as “extend and pretend” not just because of intended affront but rather due to how fitting the circumstances so often apply. In other words, central banks never seem to face up to the fact that the very “problem” they are fighting against is actually itself the restoration of positive function. But because that is typically delivered via violent disorder, the central bank positions itself not in favor of healing but rather just restoring order for the sake of restoring order (the financial equivalent of “aggregate demand” or spending for the sake of spending).

This is most especially the case in the rolling “dollar” problems ignited by the shifting QE paradigm in global bank balance sheet behavior begun all the way back in early 2013. One of the primary downstream participants to the “dollar” has been the Brazilian real, and even the Brazilian economy caught between that “dollar” flushing and the very related lack of actual recovery in the US (and elsewhere). In August 2013, the Banco do Brasil took upon itself just one of these “extend and pretend” policies in the form of what mainstream convention describes as “swaps.”

At the time, I noted that they were playing a very dangerous game, not the least of which was due to the peculiarities of the Brazilian financial linkage to the wider “dollar” arrangement. This was not just “extend and pretend”, it was being wholly inefficient about it right from the start and all-too-certain that it would end favorably for Brazil.

If we sum all of this up: the Brazilian central bank is aiding in the effort to short the real while the dollar will continue to rise against it as eurodollar funding markets process volatility driven by Bernanke’s attempt to undo the bubbles he finally sees as FOMC creations. I don’t see any realistic paths to how this will end well.

Central banks do not “calm markets”, they are the creators of instability in the first place. Any calm engineered by central bank intervention is as artificial as asset bubbles, and will get reversed in due course.

That due course took time, of course, but there can be no doubt about its arrival. 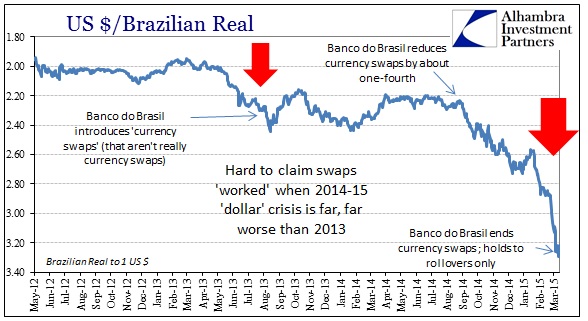 If you actually understand what Banco was doing, the second, direr devaluation was set up entirely by their attempted arresting of the first. This centers around Brazil’s rather unique methodology:

The way the Brazilian derivatives market works is different than what is implied in mainstream commentary. Without getting too far into those weeds, the Brazilian monetary authorities realized, from past experience with currency depreciation-type emergencies, that they did not necessarily need to offer dollars. Instead, the Brazilian treasury sells, continuously, domestic public debt indexed to US dollar rates.

The Banco’s “swaps”, then, act only on implied future dollar rates, increasing the cupom cambial (the onshore dollar rate implied by currency futures and spreads with dollar rates). In other words, since the central bank “swap” reduces the futures price of dollars in relative comparison to the spot price, there is a greater incentive for banks (both Brazilian and foreign) to borrow US dollars on foreign markets and import them to take advantage of the cupom cambial spread. The swap isn’t really a swap in the conventional sense since the central bank is only swapping dollar indexed securities – deliverable in reals. In short, it is the old central bank axiom of getting the “market” to do your dirty work for you.

If you got all the way through that you realize that the Brazilian central bank starting in August 2013 impelled their own domestic banks (and foreign subs operating in the country) to go further short the “dollar”! Which they did. The usual alleviation pattern in a short squeeze is most especially not to increase the proportion of float dedicated to shorting. In other words, by the time of the second “dollar” eruption in June 2014 Brazil was in much, much worse shape with its own central bank impelling a far greater and far deeper “dollar” imbalance; only needing a spark to blow it all up and take the form of another synthetic squeeze.

That came in September 2014, at the worst possible time as the eurodollar disruption grew intense, but Banco do Brasil officials were sure they had been so successful as to scale back their attempts at even their own “dollar” manipulations.

Brazil’s central bank sees no limit or risk for its U.S. dollar swaps program as reserves of $375 billion give credibility to the instrument that reached $99 billion last week, according to a government official involved in the discussions, who asked not to be named because the talks aren’t public.

That was from October, a much different view than that expressed this week in suddenly ending the “dollar swaps” altogether.

Officials will stop the auctions at the end of this month, the central bank said in a statement Tuesday. The monetary authority will continue rolling over old contracts, which are equivalent to selling dollars in the futures market, depending on demand and may still hold auctions for dollar loans.

The program, which began in 2013 as part of an effort to limit volatility, wasn’t enough to keep the Brazilian real from plunging 26 percent over the past year to the weakest level since 2003 this month.

The important point is, as with almost all monetary intrusions, not so much that it failed (as that was likely from the start, as I said above) but that Brazil was/is so much worse off for the attempt. Again, this means of currency direction was highly inefficient, meaning very expensive in the long run even if it succeeded.

The swaps became a fiscal liability after growing to about $113 billion, according to Alberto Ramos, the chief Latin America economist for Goldman Sachs Group Inc.

That was $113 billion in liabilities that cannot now be unwound without amplifying the already devaluing currency by an order of magnitude. The real is stuck as its central bankers did not understand the “dollar” marketplace into which they played, nor the defects evident in every monetary textbook handed out, apparently, to every central banker upon their installation in their policy positions. These are common flaws traced back to orthodox economics being comfortable only in generalities and thus ignoring the specific traces that are extremely important to perpetrated existence.

It’s as if central bankers take medicines based solely on how the pills look from a distance, with no effort to actually read labels or especially the fine print. The results are obvious across the world but yet these same economists are still treated as somehow experts on these very subjects.

Central bank President Alexandre Tombini told lawmakers Tuesday that the sale of swaps supporting the currency has fulfilled policy makers’ objectives, while adding that extending the maturities of existing hedges is appropriate in the short and medium term. The swaps program has played an important role in promoting financial and economic stability as well as reducing currency volatility, he said.

I have no words to describe that statement, as I don’t know how a 40% devaluation counts under anything other than massively expanded currency volatility. I know rational expectations means never admitting failure, but that is especially offensive to all sense and even basic intelligence. Unfortunately, as with Japan and even Yellen’s version of the US, Baghdad Bob was just ahead of the curve, as he would apparently have enjoyed a long and illustrious career as a central banker.