No Data Supports the ‘Strong Dollar’

No Data Supports the ‘Strong Dollar’

Since there is no money in monetary policy, it isn’t all that surprising policymakers seem to have such little grasp of it. Ever since it became apparent that “something” was different after June 2014, the visibly rising “dollar” has become the fantasy du jour (after repeating that oil prices were sliding only due to “unexpected” record supply). It has gotten so bad and so far off base that nobody seems to challenge that what we have right now bears absolutely no resemblance to a “strong dollar.” Since it fits the preferred narrative, however, it is also unsurprising that this misplacement continues with the only question as to whether it is deliberate.

Being so far removed from an actual monetary system, volatility in any currency has become viewed and accepted as the normal course. And it sounds consistent, as something that is rising in “value” is easily taken under the qualification of “strong.” If the “dollar” is rising and at a robust pace, it stands to reason that there is something very valuable expressed by that trend even if it isn’t immediately apparent what that might be.

The problem with that formulation relates to the idea of “value” itself, namely that fiat currency holds none except what is deemed appropriate by monetary officials under the government cover of statute. This raises a contradiction straight away as central bankers (not just in the US) have been desperately trying to engineer a “weaker” dollar. To an FOMC official, the currency is nothing but a tool and thus holds no “value” whatsoever – a theory that Janet Yellen recently affirmed when stating that cash is not really cash. In that very important respect, the US currency (which is far more than the US) isn’t “behaving.”

Rather than emphasizing that obvious inconsistency, the FOMC would rather the mainstream continue to run with this dollar = economy idea since it helps foster the narrative they seek to engineer through all those good emotional derivations (rational expectations). The true nature of the strong dollar was shown in convertibility, and thus the actual link to the economy is in the stability of the currency. Economic uncertainty increased the uncertainty to which fractional currency levels diverged from true money (gold, but not always), and so when the economy was perceived weak the currency “price” would no longer maintain a visibly stable state.

And so the true “value” condition of the currency in terms of the economy is not “rising” nor “falling” but stable. In many respects, the rising “dollar” is no different than the falling “dollar”; the only relevant difference may be in how such evident imbalance is inevitably rebalanced.

With Q1 economic accounts turning decidedly negative, the harm to the “strong dollar” idea is heightened even inside the mainstream.

It is somehow and likewise simply accepted canon that a “strong” dollar is an impediment to US growth in exports. Again, appealing only to simplicity, there seems at least some consistency with the idea as that in the narrowest of comparisons an upward moving dollar appears to suggest that US consumers and businesses could buy more imports and sell fewer exports – exports become relatively “more” expensive on global markets while imports do the opposite.

The first part is at least confirmed by actual observation, though the second part more than suggests that is so for reasons wholly different than what Ms. Yellen proclaims. 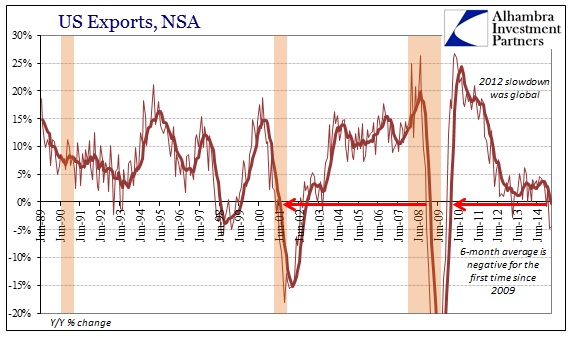 Exports have declined more than 4% year-over-year in both January and February. It is, obviously, the most serious declines (especially back-to-back) since the Great Recession; to the point that the 6-month average is negative for the first time since 2009. That would seemingly relate to that “rising” dollar, but that would be the only time so consistent with the orthodox theory. The “dollar” wasn’t so rising in 2012 yet export growth slowed so much that the world (including the US) felt compelled to reactivate massive central bank intrusions. That would seem to propose not “strong” or “weak” currencies but cyclical (and structural) deficiencies in the global economy apart from them. 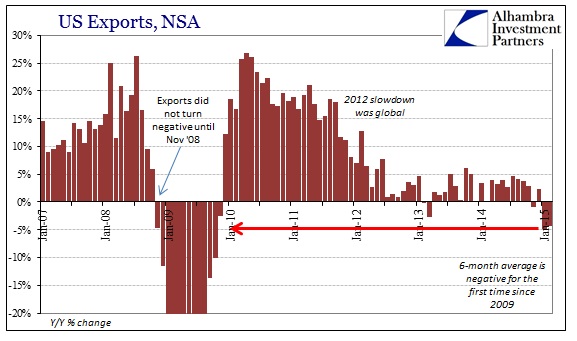 For all her assumed confidence in the export part, Yellen seems to have avoided mentioning imports. If the “strong dollar” is negative for exports, it should be highly positive on the other side – cheaper foreign goods available to US consumers who, we keep hearing, are undergoing a massive expansion in payrolls and the US economy overall. By all merits of logical induction under these orthodox assumptions, US import levels should be simply massive given this “booming” economy and a seriously “strong dollar.” 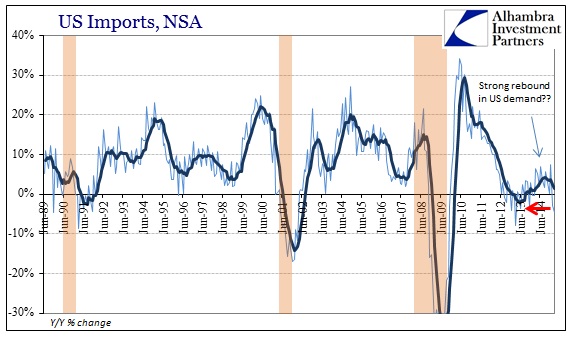 Like exports, however, imports have also declined in both January and February. Economists will be quick to point out that petroleum is anticipated to account for that disparity, and it is indeed true that US imports of crude oil are falling. In February 2014, the Census Bureau estimate the US imported 212.5 million barrels and just 192 million this February (-9.6%). In real trade terms, the dollar value of those imports plummeted by 51%! 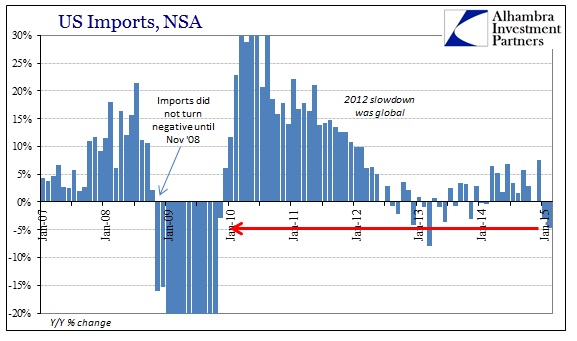 The difference in estimated petroleum trade is about $9.9 billion, which is a huge amount. But even considering that sum, total US imports (NSA) are figured at $169.7 billion in February 2014 and $161.8 billion a year later, for a net change of -$7.8 billion. If we account for the dollar value of petroleum, total US imports only grew by a seriously challenging $2.1 billion (or just 1.4%). In other words, imports are more than suggesting that both the US economy and the dollar ideas about it are simply unsound (pun intended).

None of this would be surprising to the Chinese, as import activity and growth from the United States has been almost nonexistent for some time, but particularly so far in 2015. As I have pointed out repeatedly, this is a driving factor in the PBOC’s “reform” ideology as it actually acknowledges true fundamental scales. Despite this “booming” US economy, US consumers have “somehow” lost their appetite for the same Chinese goods that they could not get enough of pre-crisis. 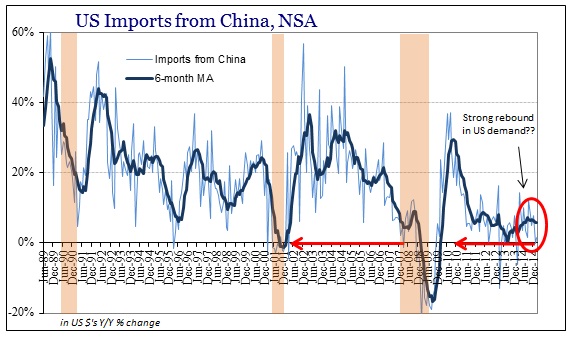 US imports from China declined by 0.1% in January and then “bounced back” to just +1.6% in February – meaning there hasn’t actually been any import growth for the Chinese this year. That is certainly important in terms of global trade, but also as activity with China removes both the petroleum and dollar excuses since yuan is largely pegged and mostly invariant and we don’t get crude from that part of the Pacific. But it wasn’t just China that blows apart the orthodox currency narratives, as the very symbol of pure orthodox expression, Japan, saw US imports from that nation fall by an astounding 12.9%! 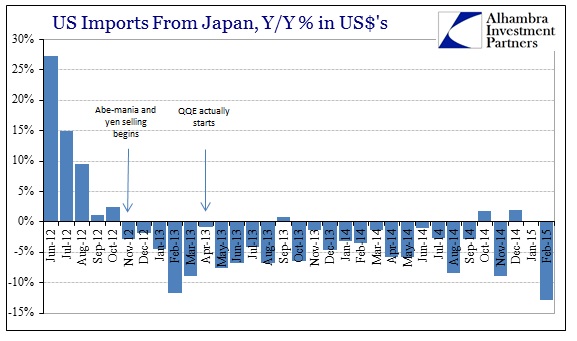 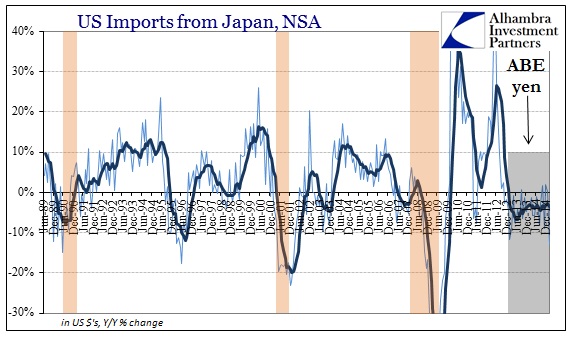 In my analysis of these observations, there is surely a strong tie between the “dollar” and the global economy, with the US securing a place, unfortunately, within that, but it is not in the manner that is continually and repeatedly declared by economists’ wishings and mainstream parroting. A rising dollar, especially in the wholesale “short” system, is not a particularly positive signal about economic factors, a point that makes sense in remembering what a truly strong dollar actually means. Rising, falling, doesn’t matter in that unstable currency regimes are emblematic of unstable economies, a correlation that is being again proven by recent estimates of global trade.

Janet Yellen will have to suffice with her confusion, or at least the fact that she goes along in public with this version of strong dollar nonsense. However, she may gain at least some “comfort” in the absurdity of GDP as it relates to such times. With imports falling faster than exports, these figures will likely be positive (marginally, though) for Q1 GDP estimates that only concede second derivative applicability. Global trade and US activity are falling consistently and significantly, at the worst since 2009, but that is a boost to GDP. 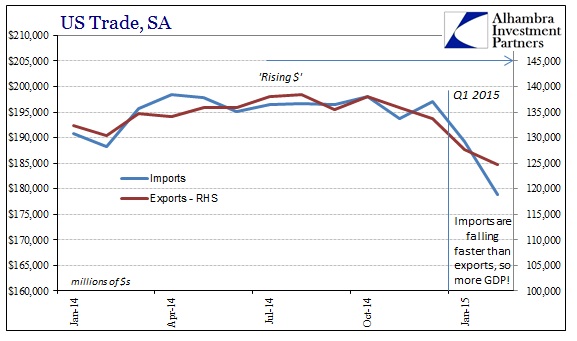 At least there is distorted consistency even in that small way, as all of this applies to both the flaws in the economic theories and the economic accounts created from them. What is highly inconsistent is describing any of this in terms of a “strong dollar.” If there were actual value in the currency, in any format you might choose, such a distinction would make central banks’ attempts at hiding it impossible – which, by the way, was the whole point in removing money in the first place.