A View To The Downside

A View To The Downside

With retail sales and some other recent indicators flashing deeper warnings about the current economic climate, the concerns I raised last week and before about the “bunker mentality” have increased in relevance as well as probability. Specifically, if recession on the consumer side is rightfully characterized by households taking on a “bunker mentality” then it is appropriate to suggest what might be expected of a renewed “cyclical” turn with consumers never having really emerged from the last bunker.

That approach gets directed too much toward the spending side, undoubtedly due to the unhealthy fixation orthodox and mainstream commentary has for “aggregate demand”, so for my purposes I think it more illuminating on the income side. The context then is what might we expect of cyclical income swings with almost every income measure already beginning from an historically low starting point. If the cycle were to turn here, how low can we go? Even under less-adverse or milder contraction expectations?

Using past recessions as a guide, the projections are pretty grim. Starting with average weekly earnings (which have already turned lower in recent months), any reasonable expectation of a “typical” recession pattern would leave earned income at its worst, by far, state in the data series (NOTE: I have used here 6-month averages to gain a more basic sense of peaks and troughs that might be more appropriate for general extrapolation, especially since consumer and household views on incomes tend to be cumulative). 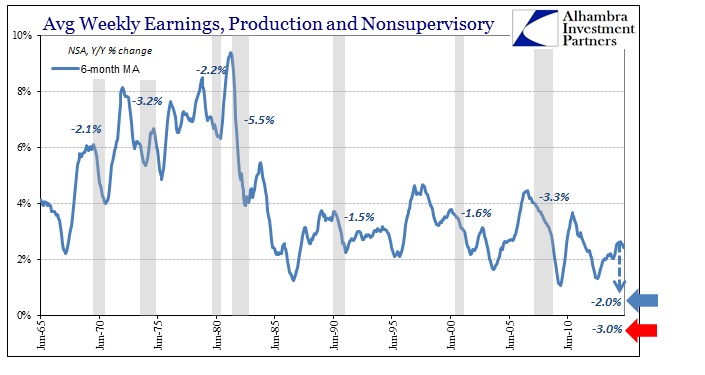 Again, there are any number of income data series and categories that we can choose from, so I’ll just add a couple more: 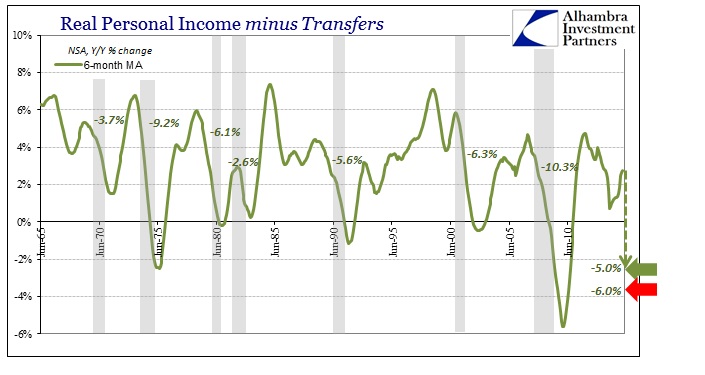 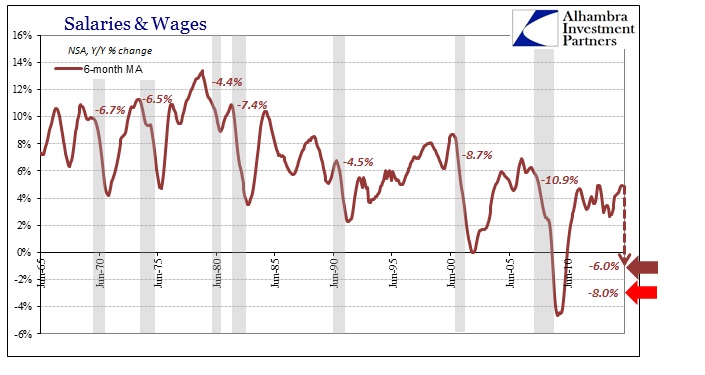 Even a mild recession at this stage would perhaps (even likely?) create income conditions that are not unlike the Great Recession’s trough. That has to be an abiding concern as the economy has clearly “softened” in 2015 without so much more than a trickle of recovery to this point. Under just the milder scenarios, income levels across the economy would drop to among the worst in post-war recession history, which, given the conditions in credit and business revenues and cash flow, leaves absolutely no room or margin for “error” before pressing amplification.

Part of that weakened state reflects not just lower starting levels, but the exhaustion of so many mainstream “solutions” (now proved pretty conclusively to not have offered much in that direction). How much more effect might monetary policy have given the obvious disconnect between policy promises and actual results thus far? If the FOMC were to restart into QE5, should we expect much of an effect this time? There is a decidedly nontrivial chance that QE would have little to no cushion upon at least business expectations (fool me four times, shame on everyone).

And then there has to be considered how asset prices might respond, especially a “reverse wealth effect” (even tepid) under both mild and adverse scenarios. Again, the potential for amplification is enormous where incomes are already deficient and then having a serious and sustained asset price reversal delete what little of the bartender economy has been adding to economic function so far – it might reverberate enough to even create a positive feedback loop of economic destruction and decay.

I think the good news, such that it may be taken as that, is this would be a first in economic history, to see recession without much by way of recovery before it. Therein lies the hope that it might not be so bad, especially if businesses aren’t too perturbed by it all – and they may not be since it may be difficult to distinguish renewed recession from what we have now of this “recovery” so far. I don’t think such a scenario is likely, especially given past history of double dips (with the second “dip” being much worse than the first), but it is at least a possibility.

It is harder to imagine that the economy would fare all that well under a renewed adverse set of conditions, as the preponderance of balance is so stacked in the wrong direction. Such a weakened state to begin with has to be a factor, as does, again, the lack of absorption capacity that would normally be present even in a more modest state at the peak. It would be a mistake, in my opinion, to discount all the myriad processes and conduits for amplification of negative pressures that are exhibited now – monetary policy exhaustion (what more could a new trillion or two get that four trillion so far have not?), the third in a series of asset bubbles precariously perched by unraveling rationalizations and the fact that consumer savings is already worn down close to a trough without having generated much at all on that “demand” side. 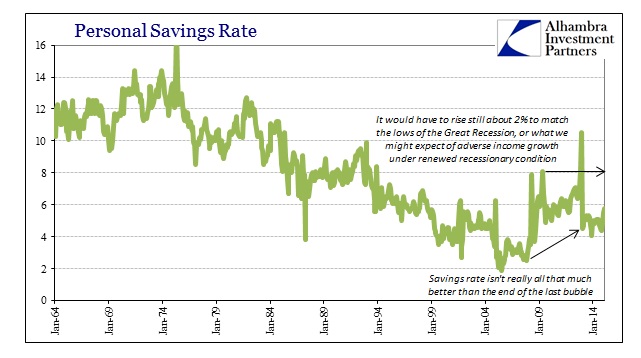 I think, on balance, the conditions gathering for a more adverse scenario are much greater and potentially more forceful and sustained than any “cushion” or offsetting factors. There is still, of course, the question of whether the economy gets that far, but with each passing month planted firmly in the “wrong” direction these suggestions and extrapolations are more and more relevant and even applicable.