I think it is interesting that the TIC data also provides some further confirmation about the Swiss participation in the January 15 version of the “dollar” problem. Of course, that still fits with the supercycle decay of the overall eurodollar standard, and even as one of those asymmetries, but I think it deserves its own emphasis. Again, all caveats about TIC apply here, namely that it is only a sanitized version of reality (what is reported) and that a great deal, even a majority, of the “dollar” world is hidden in the ether of bilateral arrangements that leave no audit trail. However, it is interesting that removal of the peg to the euro may have so unmistakably broken the damning cycle of dollar insufficiency for the Swiss banks.

We don’t know exactly the means, but it is clear that the Swiss were being engaged in UST either as increasing collateral calls or even in a “synthetic dollar swap” with the SNB or some other non-local entity. Regardless, the Swiss were in trouble and had to come up with UST’s to overcome the rising costs of their “dollar” participations. It is still held as conventional wisdom that the end of the euro peg was about the euro when even the SNB itself admitted it was about the “dollar.” 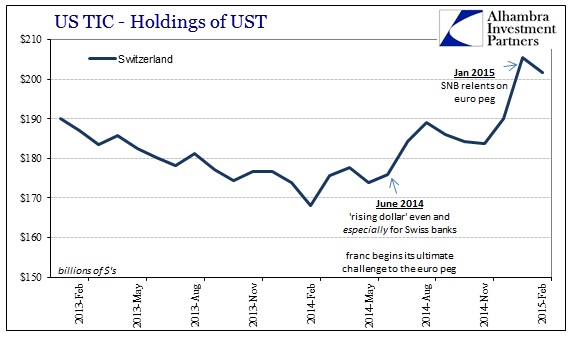 This is certainly just one month and the data is more remote and sanitized, but it does seem to suggest that there was some removal of direct “dollar” pressure in February as opposed to especially December and January. It will be interesting to see if that changed in March, as the franc again was under severe pressure up to and around March 17 – just as the FOMC deliberations began, ultimately relenting into assumed “dovishness” (were Swiss banks “informed” prior or contemporaneously?). If the SNB opened a “relief valve” for the global system on January 15 it certainly seems as if the Federal Reserve did the same on and around March 18. 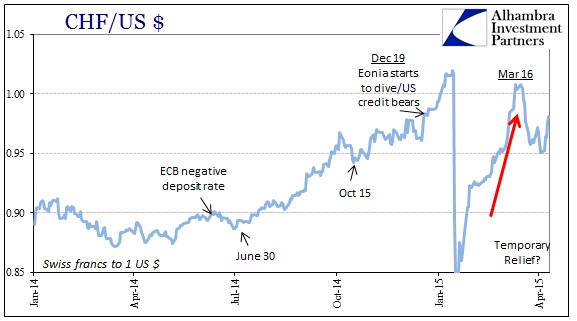