I think we are getting an even better sense of what might be the most ironclad law of orthodox economics. It seems as if there is a nonlinear proportionality between the desperation in which the mainstream denies it and the farther away from recovery the economy becomes. Last year was full of denial, especially as it related to that “anomaly” in Q1, which then became unquestionable confidence by Q3’s now-forgotten 5% GDP. With Q1 poised now to come in reasonably below zero yet again, this “law of QE/ZIRP commentary” is proving effective.

My colleague Joe Calhoun points to the Federal Reserve Bank of Atlanta and their “macro blog”, with a new post that really wants to scream out “don’t worry about Q1.” To gain that emphasis, the author, a research economist at the branch, suggests a statistical discrepancy in the manner of GDP post-crisis.

What’s causing this pattern? Well, it could be we just get really unlucky at the same time every year. Or, it could be a more technical problem with seasonal adjustment after the Great Recession (this paper by Jonathan Wright covers the topic using payroll data). It also seems likely that we can just blame the weather (see this Wall Street Journal blog post).

Whatever the reason for the first-quarter weakness, it appears to be happening again. Our current quarterly tracking estimate—GDPNow—has first-quarter growth hovering just above zero. As for the rest of the year, we’ll have to wait and see. We of course hope it follows the postrecession pattern.

To bolster that interpretation, he provides the visual with a clear bias against Q1. 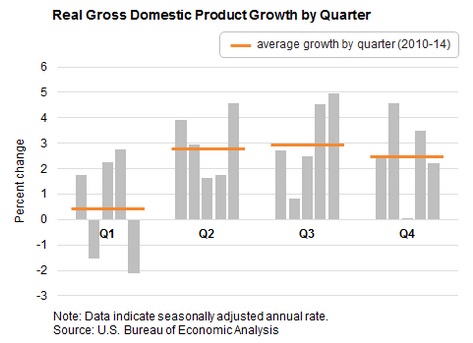 I’m not sure that data is all that convincing, so it may be useful to search for it in other places. To rule out a statistical problem in the seasonal factors used for GDP, I’ll use three different data series in their unadjusted format. 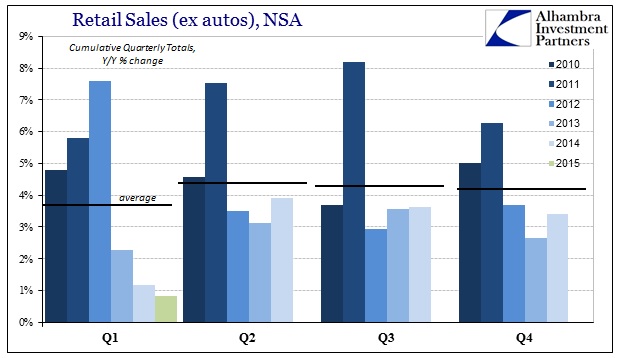 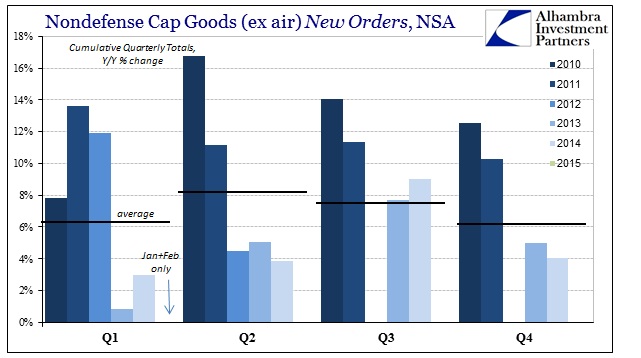 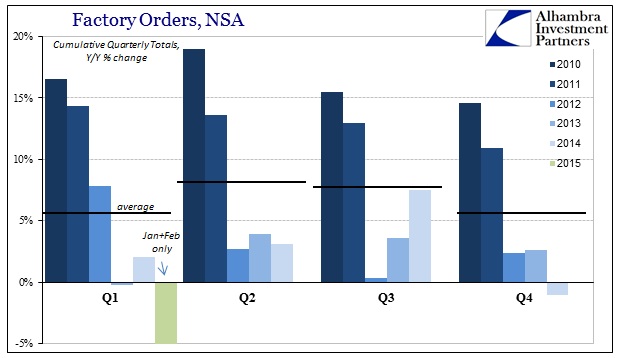 It isn’t much, but there is a “hump” in the middle of each yearly trajectory, if only in the average quarterly growth rate. It’s more pronounced in factory orders, but this would suggest, even slightly, as to something beyond a statistical problem with GDP. If only we could find some event that occurred near the end of each year and that greatly affects the start of the next? Something economic where there would be a great deal of shopping and ordering, maybe upon which the entire economic calendar revolves?

It may not be obvious to economists, but the Christmas shopping season under constrained conditions might better offer an explanation for the trend here. And to emphasize that point, I have cleaved the yearly figures right at 2012 – you only need to see the actual dominant trend in the charts above to figure out why. 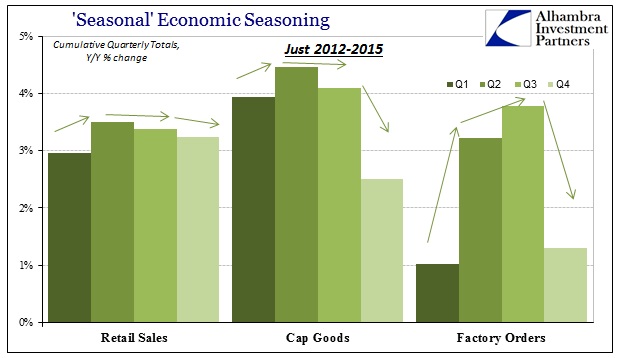 Again, it is far more pronounced in factory orders, but there is certainly this “hump” in the yearly presence. It doesn’t take too much imagination to wonder why the Christmas shopping season would offer such a massive imprint in an economy that isn’t actually growing by organic and genuine processes. Without wage growth, activity must shape itself around the holiday, including and especially over-eagerness on the part of businesses in anticipation of it (the real wonder of QE). This point, too, is emphasized on the first half of our data series, where growth was more evident and even abundant (if only relative to the post-2012 period). 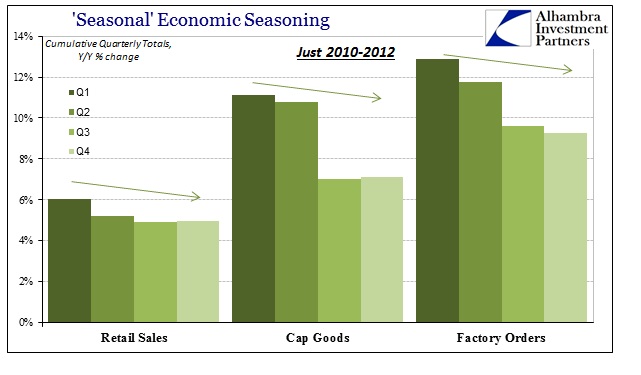 In these earlier years, there is no mid-year “hump”, instead showing the exact opposite of what the economic researcher in Atlanta says about GDP. The first quarter in each year is clearly the strongest, meaning that whatever has taken hold as far as irregularity in GDP and other data points is exclusively a post-2012 phenomenon. The first clue about that is offered by the huge difference in scale between the two charts immediately above.

That is the most relevant observation through all of this as it relates to actual economic concerns in 2015. If you are attempting to dispel anxiety about a regular weakness that occurs where it “shouldn’t”, then breaking down the figures by quarter seems consistent but even that should not prevent full recognition of what stands out the most: 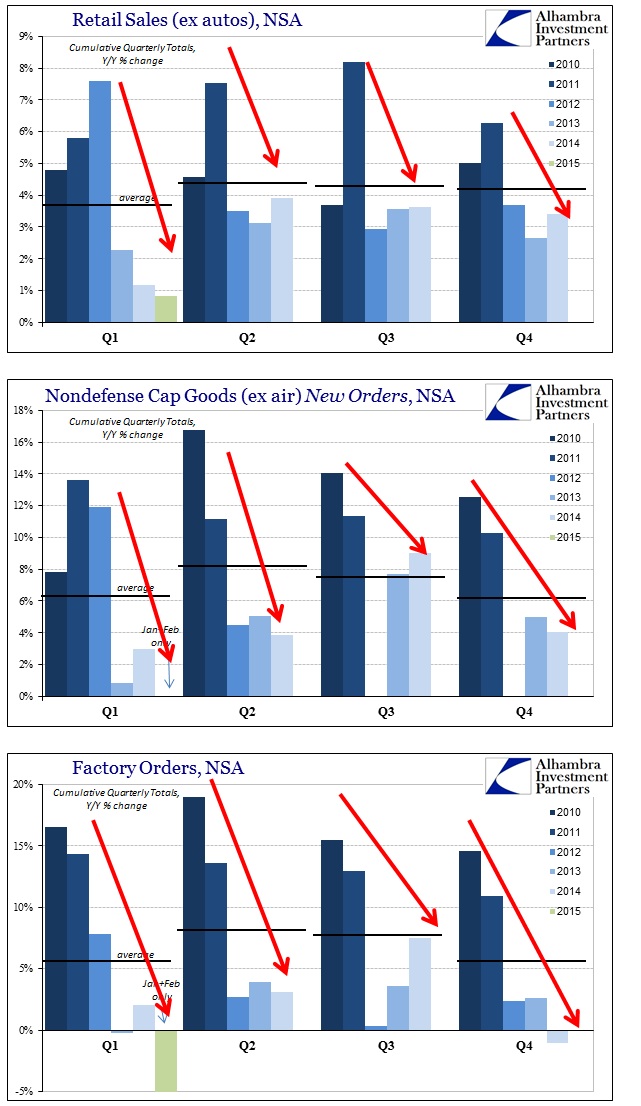 GDP itself is a highly flawed figure under these conditions, and the fact that it doesn’t show the same drastic differences pre- and post-2012 is another indication of its limitations. Regardless, the explanation for the apparent calendar-based weakness around the ends vs. the middle months is traced back to that fact. This slowed economic existence after 2012 is highly unstable, and thus last year’s negative GDP in Q1 was emblematic of that. Instead of ignoring it, economists should be more concerned about what that might mean for future growth prospects. The fact that GDP surged to 5% actually demonstrates the same instability, especially as that growth was not reflected in any of the other economic accounts shown above.

The baseline of pre-crisis history “expects” (meaning models and the GDP view) a surge in Christmas spending at holiday time, and when it doesn’t show up as expected the “ends” look far different than they had during more robust growth periods (either 2010-11, or pre-crisis). Households can barely afford to spend during the holiday season, and then as that disappointment leaves retailers and wholesalers full of inventory it affects the whole supply chain in the early part of the following year. Further, consumers increasingly are tapped out around Christmas so by the first month(s) of the new year they are forced to cut back both as the bills come due and the savings accounts are empty. That is instability, as it isn’t recession in the technical sense but it isn’t really that far from it.

Of course, the “between-the-lines” meaning of the Atlanta post is to ignore all of this since this weakness is being portrayed as “just like last year” a statistical problem in the one measure that economists think most represents the economy. I’m not sure that seems like the most convincing course, undermining the very tool that you have been using most to get everyone to believe in what clearly doesn’t exist. In plain view of a fuller accounting of economic accounts, I actually believe the Atlanta presentation argues more so in the direction of scrapping GDP altogether rather than settling any growing concerns about the economy falling apart. Then again, desperate times call for whatever might “work.”