There is an irreconcilable tension that lies at the heart of every “extraordinary” monetary policy. It isn’t something that is talked about much, and in fact it is steadfastly avoided as if these were two distinct topics. Bringing them together amounts to “crossing the streams” (to use 1984-style metaphors) and tends to undermine the idea that in the most extreme circumstance most extreme measures are needed to deviate.

You hear it all the time from central bankers and economists, as their contention of the cumulative economic shortfall since August 2007 relates to “inadequate demand.” Their solution then is to “stimulate” demand mostly by killing the impulse toward savings. Indeed, the qualification “repression” fits this intent, as central banks are intentionally suppressing rates of returns on “safe” and “liquid” instruments in order to “nudge” people toward spending currency. This has a long history of intellectual development, tracing back further than even the underconsumptionists who timed their apex to just before the Great Crash in 1929.

Orthodox adherence to these views tend to be less public as it would rightfully raise suspicion about exactly what is being planned and executed. Instead, central bankers look to the more positive side, or one that at least sounds upbeat, of “stimulus” through lower interest rates. They tell you it is cheaper to borrow which sounds terrific if you have little concern over repayment and absorbing even minor increments of interest, but it is all part of the whole recession-fighting kit.

The first part, repressing savings, amounts to killing the currency in favor of its usefulness only as a tool in intermediating spending. More extreme views on this have been expressed regularly, but even more so as the latest rounds of similar “solutions” fade into ill-fated history. Citigroup’s Global Chief Economist, Willem Buiter, only last weekend was on his soapbox about the “dangers” of allowing people to opt out of central bank repression by holding nothing more than currency:

Before looking at the practicalities of abolishing currency, we should first look at whether it could ever be necessary. Due to the costs of holding large amounts of cash, Buiter puts the actual nominal rate at which the move to cash makes sense as closer to -100bp. So, in order for a cash abolition to become necessary, central banks would need to be in a position where they wished to set nominal rates much lower than that.

Buiter does not have to go far to find an example of where a central bank may have wanted to set interest rates much lower to -100bp. He uses (a fairly aggressive) Taylor Rule to show that Federal Reserve rates should have been as low as -6 percent during the financial crisis.

All of which traces back to the “you are too stupid to know what is good for you” school of economics that dominates the orthodoxy. The irony, which will never be appreciated by the likes of Buiter, is that his intellectual ancestors destroyed the gold standard so that people wouldn’t be able to hoard money; and so we are back at the very same place anyway, which more than suggests “they” were totally wrong about that in the first place.

If only everyone in America had spent to, and much beyond, their maximum capabilities in Q4 2008 there would have been no Great Recession (or something). That is the essence of underconsumption in its most modern format, that since people will not willingly harm themselves, economically speaking, under the worst conditions central banks should do it for them. This is a variant of Bernanke’s most ready phrasing for killing savings, as he says that he laments picking losers but they will be better for it when the true recovery comes and delivers much fatter returns upon its arrival. We are still waiting.

This is all nothing new to Buiter, of course, as he has been advocating the same exact principles since 2009. He caused quite the stir that May when he wrote it up in the Financial Times, including this neat little trick of totalitarianism:

This is Silvio Gesell’s proposal, supported by Irving Fisher and re-introduced into the policy debate by Marvin Goodfriend and by myself and Nikolaos Panigirtzoglou. When the interest rate on currency is positive, the currency must be marked (by stamping or clipping coupons) to make sure the (anonymous) bearer does not present it repeatedly for the payment of interest. When the interest rate is negative, the (anonymous) bearer must (a) be induced to come forward to receive his negative interest (i.e. pay interest to the central bank) and (b) must be able to demonstrate that the negative interest has been received. To ensure (b), the currency must again be stamped or marked (electronically tagged). To get the bearer to come forward to pay the negative interest we can either rely on honesty and a sense of patriotic duty, or we can impose sanctions for non-compliance. I am afraid penalties for non-compliance (fines, a day in the stocks) would be required to make negative interest on currency work. This would require random checks etc. It would be administratively costly and unpleasantly intrusive. This may well endear the notion to our governments.

That last sentence is a sickly conceit as he is trying, tactlessly, to suggest he is really on your side since it is governments that love power through centralization and he is merely the legitimizer for it. What he suggests is if governments don’t want to end currency outright, it should be somehow marked almost like a bearer bond so that in times of “need” and the central bank deems negative rates appropriate that you will have to pay up since your currency is already registered. The idea here is as I described above, namely that in times like recession a negative interest rate on cash will force you to either pay the government a tax for not spending or to just do what you are told and spend your currency holdings. Voila, recovery.

All the QE’s and monetary programs since 2009 need to be appreciated in that context, as though central banks have not (yet) gone that far they are using the same principles. The idea is to exterminate the savings impulse by nearly killing currency. Buiter, as with all economists, registers no downside to doing so, as if there would be no offsetting processes or costs to the scam.

The problem with this idea starts right away with that “other” side of monetary “stimulus”, the one in which monetarists are only too easy to allude as their public end. It isn’t just individuals and businesses that share space in that spending “bunker”, financials find themselves fretting as much or more; in the case of the Great Recession, it was banks that were nearly the singular source of cutting back so far. In that sense, killing currency makes no sense as it is the basis for credit production that economists deem as necessary as forced spending.

Destroying currency amounts to belittling or ending time value, which is a crucial part of gauging and setting risk parameters in the real economy. If there is no time value to “money” there is essentially no reason to engage in risky behavior. This is what Keynes described of a “liquidity preference” though for different reasons. Instead of individuals holding too much cash, banks will do so because of that same repression. So at the very least, where the central bank is intent on “forcing” spending through negatively manipulating the currency, they are at the same time destroying the financial basis to produce credit – all the while herding financial agents into holding even more “currency” with and without of bearer formats.

How do central banks respond to this, as I said at the outset, irreconcilable elements of monetarism? By deciding that currency isn’t dead enough.

We don’t get as much a sense of that inside the US as we are sheltered mostly from the degradation in the “dollar.” It is far more acute where that “dollar” intersects with other realities, including emerging markets that are totally dependent on that wrinkled form of modern finance. It is also very clear in Europe of the euro, in good part by the very noose-like structure of the currency “union” itself and the more outward lack of momentum in economic visibility.

The ECB has been ratcheting its attempts at destroying its own currency, under notions of “stimulus”, having practically effected Buiter’s recommendations. What none of them accept, however, is that there are very real limits to these attempts, as destroying your currency can surpass very real confines into a full-blown “run.” This is not just fears of Greece’s exit, but rather something much deeper, greater and potentially catastrophic:

“As a reserve currency, the euro is falling apart,” said Daniel Fermon, a strategist at Societe Generale SA in Paris. “As long as you have full quantitative easing, there’s no need to invest. The problem for the moment is we don’t see a floor for the currency. Money’s flowing out.”

European Central Bank President Mario Draghi has in the past welcomed the drop-off in reserve managers’ holdings because a weaker exchange rate makes the continent more competitive. Yet firms including Mizuho Bank Ltd. warn the currency’s waning popularity reflects a more lasting loss of confidence in an economy that shrank in two of the past three years.

This is not to say Europe should expect hyperinflation in 2015, only that there are real dangers up to and just short of that final step. The euro as a currency looks exactly like economist want it to, but that is entirely the problem: 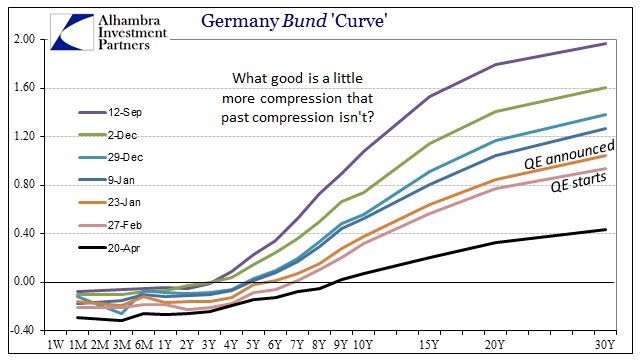 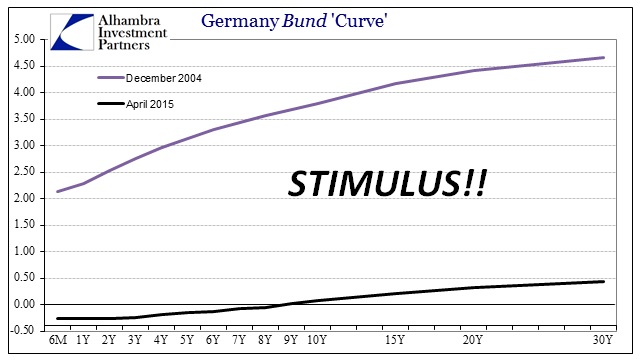 If there were some ideal projection of a dying currency this would be it, and it is being killed intentionally as a way to somehow save itself. Somewhere, that makes sense at the ECB or the Federal Reserve (or at Citigroup), but this is perhaps the inevitable ends of full-blown central planning activism. Even repo rates (GC!) are negative regularly throughout Europe, to the point that repo curves have negative time value on top of negative nominal. You can’t even begin to describe how messed up that is in any meaningful context apart from generic monetarism.

Gresham’s Law says that “bad money drives out the good”; there seems to be a corollary whereby “bad money will drive out useful economic and financial functions.” The ECB, as the Fed, has “overvalued” currency with respect to “demand”, and thus Gresham’s Law is at work. Another way of saying that is you cannot create a recovery by replacing one form of instability with another; you cannot produce a healthy economy from a preponderance of negative factors. The results are obvious everywhere, and it will never be enough dead currency, except that this new stage of the singular “cycle” seems to be “challenging” central banks toward producing a healthy economy from nothing but negative factors. 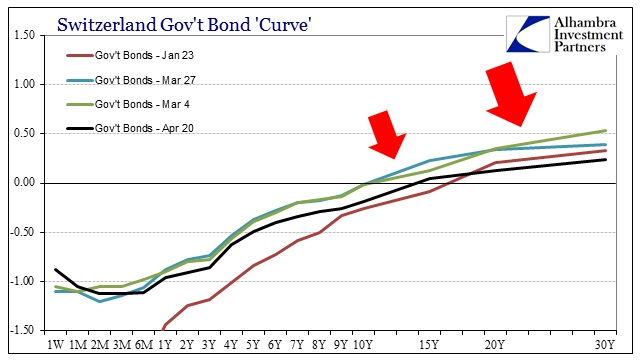 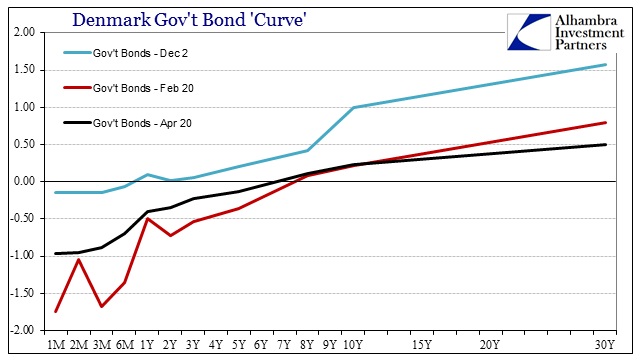