Yesterday brought on an exposition on the death of currency, but it was only one dimension in that process. Owing to the orientation of monetary policy, especially under QE conditions, most attention is focused outward from short to long. The irreconcilably truth, as I put it, is that destroying time value amounts to depressing financial participation. Today we are very much reminded that there is supposed to be an “inward” hierarchy as well, though containing more dimensions than just time.

Three-month Euribor just crossed zero, which has unleashed a torrent of commentary and attention to part of the interbank markets that 99% of people aren’t aware exists. Society does like round numbers, and crossing from a positive to a negative does seem to be significant. If nothing else, it does bring attention to this flaw in the monetary theory as depressing all these rates is supposed to have “portfolio effects” to go along with “forcing” people to spend.

“It’s good news for borrowers, not so good news for lenders,” O’Hagan, Paris-based head of European rates strategy at the French bank. “Mr. Draghi wants us to spend the cash, not keeping it in Euribor. The purpose of QE is to get us to take on some risk.”

The very fact that now 3-month Euribor is negative more than suggests “risk” is not something being entertained. That was true when Eonia first went negative some time ago. As spelled out yesterday, the depression of time value actually increases the “demand” for liquidity and relative safety – why bother lend at ultra-low rates for huge risks in credit and also price swings. This speaks to “forward guidance”, or at least what orthodox monetarism has made of it in recent years, as if QE actually works then it has to be unwound at some point and all that lending supposed to be taking place now becomes then a serious loser and drag. Why bother?

The ECB’s own negative deposit rate has been in place since last summer, and was supposed to deter banks from parking cash they could be lending into the safe embrace of the central bank. However, since the QE program kicked off, deposits held at the ECB had been rising anyway, suggesting banks were already content to pay a premium for relative safety.

It’s not just these negative rates that are contradicting monetary expectations, it is the obliteration of the hierarchy. Not only is there supposed to be time value even in the shortest durations of interbank trades, there is also supposed to be relatively clear demarcation between secured and unsecured arrangements. As time value is one basic expression of risk behavior so is collateral – lending cash unsecured should attain a higher rate than a secured alternative to pay for the risk of being uncollateralized.

There are, of course, all sorts of reasons and features where this gets complicated, but the basic structure is there; or at least it used to be. It is a bit clearer when you view euro-denominated interbank in its pre-crisis form: 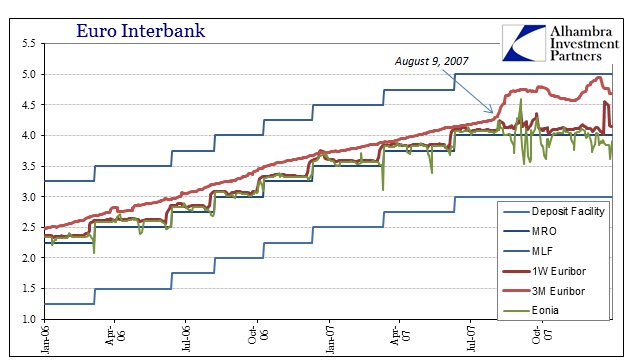 Eonia and 1-week Euribor trade very close with a slight premium due to time value, all fixed around the ECB’ corridor midpoint, the MRO. The MRO is the Main Refinancing rate where the central bank conducts open market operations (the “O”); functionally it is (supposed to be) the European equivalent of the federal funds target. The ECB calculates liquidity needs for each maintenance period and then conducts open market operations to add and withdraw “reserves” as necessary to maintain a stable Eonia.

As you can see above, there were no problems and each interbank slice functioned smoothly according to the basics of risk. That all changed on August 9, 2007, as all manner of problems showed up where there had been none before. Three-month Euribor shot upward while Eonia erratically dived below the MRO. Even 1-week Euribor and Eonia parted, with volatility across the interbank complex.

The persistence of Eonia below the MRO was a very definite signal that the ECB wasn’t getting liquidity “right” and that the calm and ordered manner of interbank markets was not just breaking down but doing so in a durable and destructive fashion. Despite trillions of euros, countless programs and endless promises, the interbank market is still broken almost eight years later. 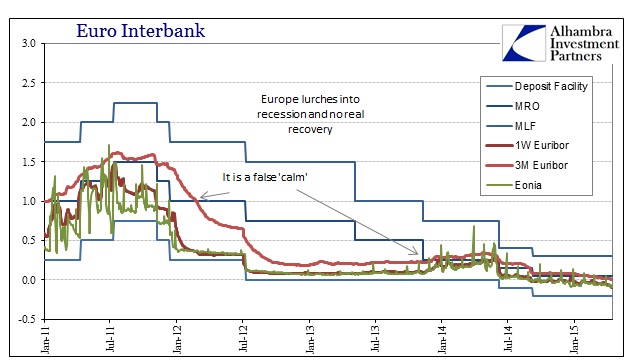 What the ECB essentially did in late 2011, mostly through the LTRO’s but we shouldn’t discount the effects of open-ended “dollar” swaps from the Fed, is overwhelm the interbank market in order to interject the appearance of calm and order. It was not, however, a restoration but rather the projection from the inside out of a false sense of basic function. The flatness created throughout 2012 and 2013 allowed the ECB to proclaim success when in fact all they bought was an end to the most violent pieces of disorder (such as the surge in bond rates in the middle of 2012).

In a very important sense, that flatness in the interbank market spells out exactly the same kind of doom of currency as I described yesterday of financial markets beyond the interbank boundary. So the ECB destroyed basic risk hierarchy, interbank first, and has been seeking to recreate it in wider circles ever since – now incorporating entire bond curves of some of the biggest financial markets in existence. 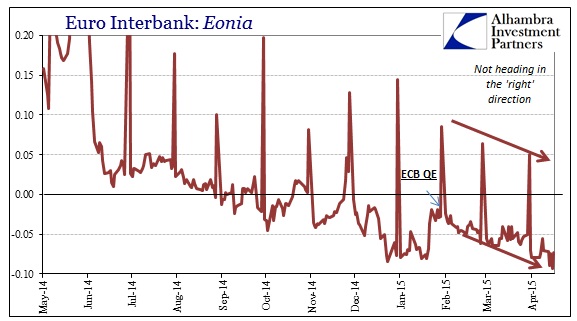 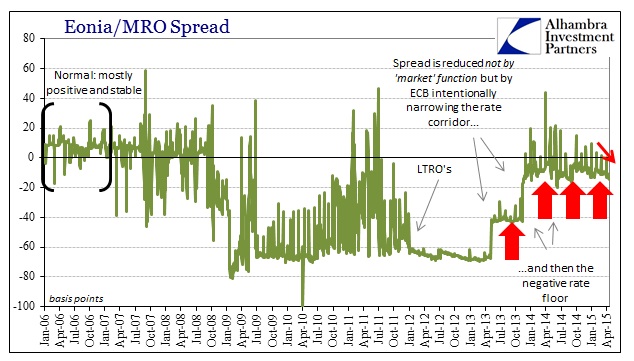 As I said above, both Eonia and the shortest Euribor rates have come in under the MRO almost exclusively since the actual panic. That is a damning signal that interbank markets remain under abnormal conditions, to which a fair amount of disorder is actually expected from that. For its part, the ECB under Draghi has been attempting to corral those rates not by allowing actual risk to seep back into the interbank spaces but rather through increased “coercion” this time in the form of narrowing the rate corridor. As is plain above, the negative spread of Eonia to the MRO has been narrowed not by again restoration but rather the continued sinking of these policy reference points (to say nothing of how open market operations no longer apply in the manner that they used to and “should” be). 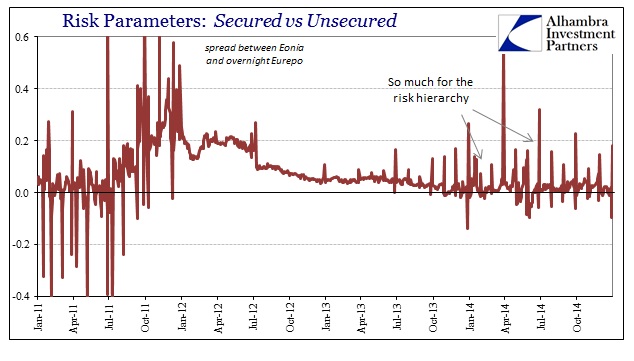 The fact that the rest of the interbank complex is joining Eonia in dysfunction is significant, as it isn’t uncommon anymore to see Eonia trading below overnight Eurepo (shown above). But where mainstream attention has focused on 3-month Euribor’s cross to zero the more significant boundary was actually penetrated earlier in February when 3-month Euribor fell below the MRO rate once again. 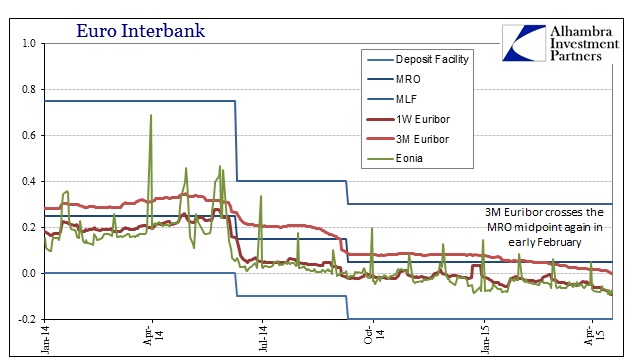 All of this is supposed to lead to recovery, as that has been the proclaimed goal since 2009, reaffirmed in 2011 and then taken to extremes in 2012. The pathology of that recovery was meant to harken back to a combined Bagehot and Milton Friedman, where the elimination of financial disorder leads directly to a restoration of credit flow, and then the economy back to its potential according to the plucking model. The ECB has been quick to point to its success in that regard, at least with the first step in the expected progression. 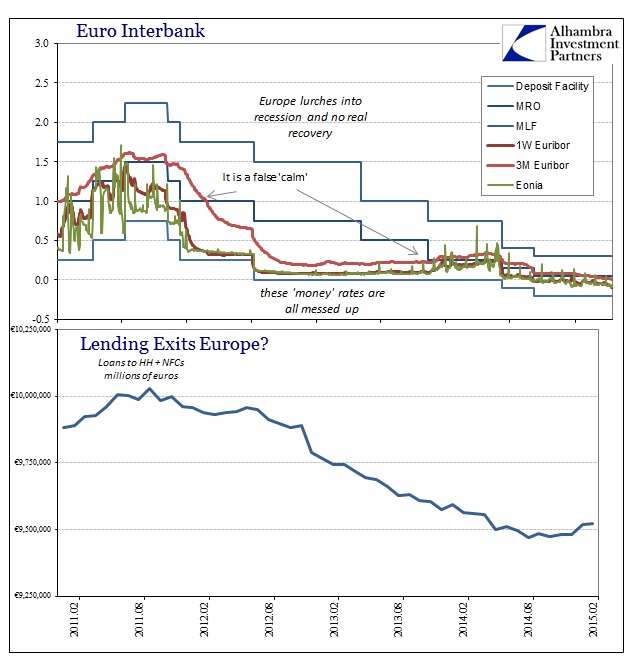 What is actually clear, if you stop and measure it, is that Mario Draghi hasn’t even taken that first step. They have tried “extraordinary” policies one after another and the real economy has felt so little from them. Throughout the entire super-aggressive monetary period shown above, lending to the real economy has persistently shrunk; and not by some trivial amount but by about €560 billion since the peak in September 2011 (it’s not a coincidence that month would see the crowning in European lending). The dominant reaction of policymakers (and not just in Europe) is actual and near total confusion, which is even detectable in their public forums where poker faces and obfuscation are standard.

They cannot fathom as to what the Chinese have apparently figured out, that the “dollar” system (which includes these euro operations as it mostly the same cast of characters if separated marginally by only a denomination) is irreparably broken all the way back to August 9, 2007.

The death of “money” in the interbank functions is a full part of the irreconcilable problems of carrying out conventional monetary thoughts and theories in an environment entirely hostile to them. Central banks see the world as it existed in my first chart above when that is no longer an option. Where this takes a turn from sad and tragic toward extremely dangerous is in how far they might go to press their intentions to revisit 2005; it is entirely unpredictable as to how that might work if QE continues to encounter severe resistance, as it clearly has, and the ECB ends up monetizing whatever they might (and there are more than a few signs that some members really, really want to). Time value and basic risk functions are not just financial parameters to set about economic activity, they are, in this sense, limitations for an orderly existence, holding the system from straying too far into pure anarchy. Kill the currency, end the boundary between what is known and acceptable and where Weimar once went.