Japan continues to provide the best refutation of monetary policy as anything other than destructive. With its economy stripped bare of dynamic essentials after thirty years of the Bank of Japan’s “lead”, marginal changes are left as remnants of nothing more than monetary transmission. In the space of QQE, that has used up and destroyed what was left of Japan’s once-dominant trade position, leaving the economy to hollow out from the inside as Japan Inc transfers to Offshore Inc.

Even the press toward the 2% inflation target has been pushed back, as if 2 years and a quadrillion (give or take a few trillions) yen were not enough to begin with. Back in April 2013, BoJ Governor Haruhiko Kuroda mentioned that his policy would be “flexible” (using that exact term) with regard to reaching the target and the manner in doing so, but it was clear then that he was talking about the exact opposite case – not doing more QQE if he fell far short but scaling back if it proved to be too powerful. The misplaced confidence and overestimation toward, really, zealotry is remarkable in hindsight of what has actually and instead taken shape.

The country’s economists have been scrambling to rewrite forecasts, particularly as the stock market soars and the yen has fallen sharply in global currency markets, giving Japan’s exporters a lift. Goldman Sachs, which has called the BOJ’s moves a “sea change” compared with prior policy, said in a Thursday report it now expects Japan’s economy to grow 2.5% rather than 2.3% in the year starting April 1—in part because the rise in shares may precipitate spending by consumers who feel a bit wealthier than before.

Again, the above quotation was from April 2013 detailing how great and wonderful QQE was about to be. Now, after all but admitting that the BoJ is behind and will miss its initial expectations for 2% (they now call for 2% inflation into 2016 instead of this month), and that whole recession that was totally “unexpected”, there is nothing left of those blanket expectations from the start – only a survey of deepening wreckage. As to that point, and the above allusion to “feel a bit wealthier”, there is a great deal about where orthodox theory falls so very short, as there has actually been an enormous “wealth effect” in Japan.

Japan’s economy is hobbling out of a recession, inflation is a quarter of the central bank’s target and wages adjusted for price changes fell last year. And yet sales of luxury goods are growing and the stock market hita [SIC] 15- year high.

Sales of high-end imported cars and luxury goods have been rising since Prime Minister Shinzo Abe took office in December 2012, outpacing the increase of total retail sales. Department stores sold 333 billion yen worth of luxury goods including watches, artworks and jewelry in 2014, up 20 percent from 2012. Over the same period, total retail sales rose 2.6 percent.

As it turns out, Japan may not be hobbling out of recession at all, despite the huge gains in “luxury” spending due to artificial, financial redistribution. In fact, quite relatedly, Japan’s recession may still be digging deeper as March’s retail sale figures can attest.

While there were huge base distortions related to last year’s frontloading ahead of the tax increase, March 2015 retail sales were nearly 10% below March 2014. Confirming of the trajectory apart from that yearly distortion, retail sales fell 1.9% M/M in March after February’s +0.7% M/M gain. That negative direction persists across a range of figures which, of course, has economists calling for the BoJ to visit some further injury.

“If you look at the larger data points of the past three to six months, they’ve been pretty bad all around,” Joe Zidle, a portfolio strategist at Richard Bernstein Advisors, told CNBC. “If you think about the consumer’s importance … it’s 60 percent of the Japanese economy, I think this ratchets up the pressure on the Bank of Japan (BOJ) in order to introduce more stimulus.”

I think that is exactly the problem, as consumers in Japan right now seem to be preparing themselves for more “stimulus.” It has become so disastrous as monetary policy itself may have been sorely turned upside down (if it was ever right to begin with) but yet nobody in policy or the media has the intestinal fortitude to call it what it clearly is: destructive.

The record of so much “stimulus” is absolutely clear, as the Japanese people, most of them, are becoming poorer by the day. 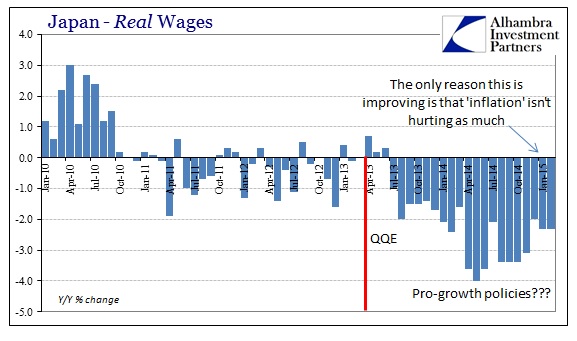 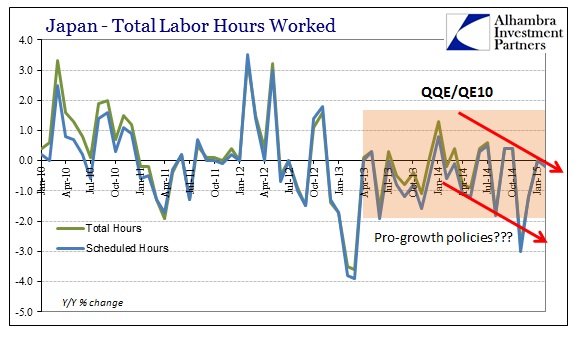 The tax increase has taken on the burden of being the convenient excuse, but it is absolutely clear that the marginal direction toward recession was established long before that point, dating back to the inauguration of QQE and shortly thereafter its immediate disturbance. In fact, recent revisions to the wage and income data show that QQE has actually been worse than thought to this point, as the hopes for recovery in wages that once seemed at least plausible last year turned out to be statistical nonsense yet again.

That more than suggests as to why, in 2015, the Japanese economy is again heading in the wrong direction without so much as a reprieve from last year’s recession – the wage recovery was just a fantasy even as the “wealth effect” checked the policy box. 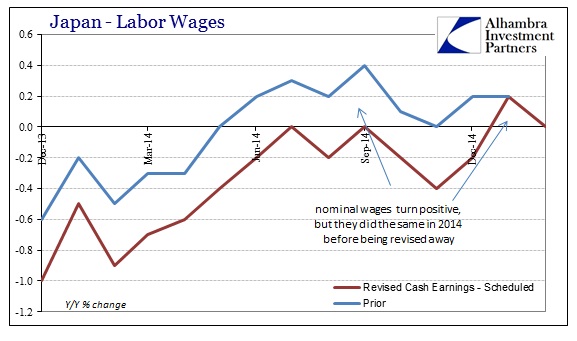 Orthodox economic theory states plainly that it is unconcerned about “inequality” because even “stimulus” that directs only to the wealthy will eventually lead to further spending and activity across the whole economy; spending for the sake of spending leads to more spending. So if the wealthy Japanese “feel” extra wealthy due to QQE and bubbles, then that is counted as an initial step toward success because it is expected that even an increase in spending on luxury items will have to be produced somewhere and lead to further hiring to produce luxury goods first, which then will have follow-on income and spending effects and so on and so on.

What Japan proves, again conclusively, is that such generic theory and thinking is completely wrong. The distortive impression of artificial “wealth” and redistribution does not lead to anything but that growing chasm of economic function where those connected most directly to QQE do very well and everyone else suffers for it. Not only does economic theory severely undercount and ignore negative feedbacks (such as “inflation” on real wages), it is dubious as to whether the intended arrangement has any possible pathway to broad success to begin with. 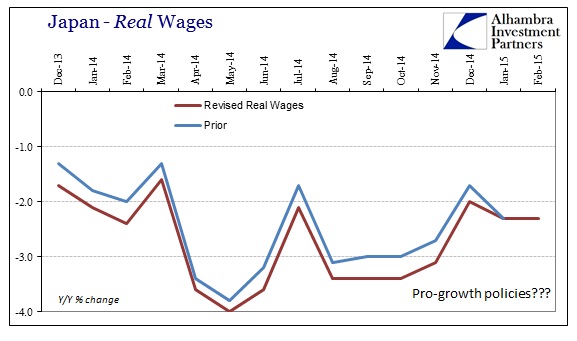 Essentially, QQE and artificial redistribution are counting financial wealth as the same as productive wealth, except that you cannot recreate the forces and shaping that positively benefits the economy from the attainment of productive wealth in the first place – it is not the spending of it that generates economic gains, sustainable and healthy, it is the building of it in the first place. Financial wealth, most especially under a heavy ZIRP or QE paradigm of some sort, takes no discipline or effort to attain it, and thus offers nothing other than spending as a means to the end; all of the support and foundation creation is left out as monetarism wishes to simply skip to the end.

Everywhere that QE has been tried, and it is almost a foregone conclusion for Europe, there is a clear bifurcation in the economy where those inside the umbrella of artificial redistribution do exceptionally well through artificial attainment. There isn’t any wonder that does nothing but harm to the real economy as no system can arbitrarily remain in a stable state. There is absolutely nothing wrong with “inequality” except the manner in which it is achieved; artificial means through bubbles and QE are the ingredients for nothing but social decay as well as economic malaise (and worse). Actual inequality brought about by productive wealth-building is the means by which capitalism progresses because the creation of wealth itself is the foundation for economic health. There simply is no shortcut.

Thus, the mistaken conceit of monetarism is on full display, especially in Japan, as they boil down their efforts to substitute financial wealth for true wealth as if they could simply conjure industrious creation from nothing. And Japan is proving useful as the full and complete refutation of every facet of such a notion, even if the mainstream resists so far confessing it.