The monthly PCE and income figures that were released this week were already incorporated into the advance estimate for Q1 GDP. Given that March wasn’t as bad as it could have been, and that PCE within the GDP report was, that kind of gives you a sense for the serious deterioration in the US consumer; “unexpectedly.” If there is a problem with setting economic expectations from the monthly income figures, and clearly there is, then it is certainly another case of “inflation.”

If your view is locked into “real” incomes or even “real” spending, you will have missed the most recent descent. This is not to say that there is no value in adjusting nominal figures by even some poorly constructed inflation measure, only that in the real world nominal does at times matter and matter more.

I think that sentiment applies now in a way that hasn’t since the Great Recession. Real incomes appear to be rising, if only slowly, going back to 2014, but only as a function of a reduced calculation for inflation. Nominally, incomes have been set back which is how people react and set their spending patterns. It surely helps if it is cheaper at the gas station, but it is a mistake, a huge mistake, to believe that cheaper gas will offset forgone wage increases and even slight nominal declines. If your weekly paycheck gets slightly smaller then the gas “savings” don’t much factor. 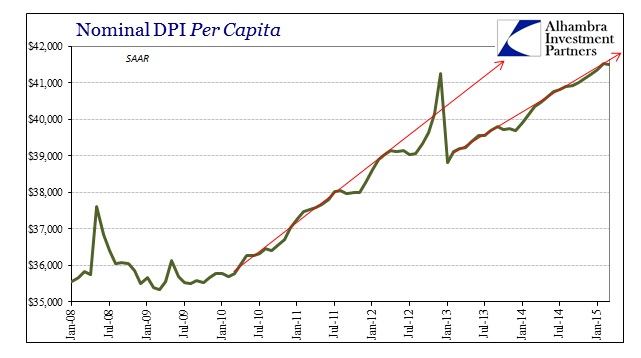 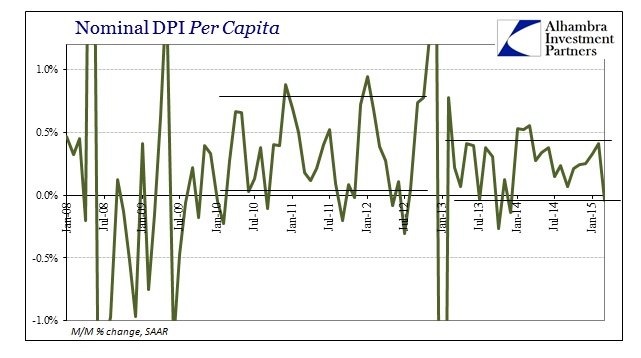 In nominal terms, income hasn’t been nearly robust as has been talked about of real income growth. As a result, building toward the end of last year, spending has been directly affected despite the expectation of the “energy savings.” 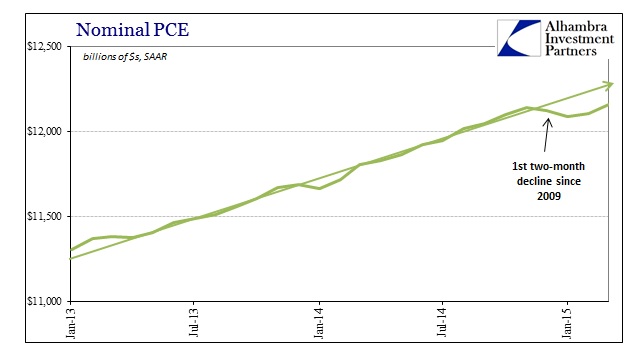 The rebound in March spending, after a basically flat February, isn’t actually a rebound until spending levels return to their prior trend. As you can plainly observe above, the decline in spending, unusual for anything outside of recession, opened a large gap that will cause all manner of downstream impacts if it is not closed very quickly (inventory and all that). Notice the difference, especially, between 2015’s gap and 2014’s much more modest “polar vortex” problem – that spending disruption was closed quickly (though it never led to the higher growth levels that were proclaimed to be the actual recovery) and thus never festered fully. A recession is the accumulation of these “gaps” that disrupt broad expectations.

Away from the month-to-month adjustments, in year-over-year terms PCE spending in March was the worst of the recovery suggesting that even the slight bounce in the adjusted figures may be just that. 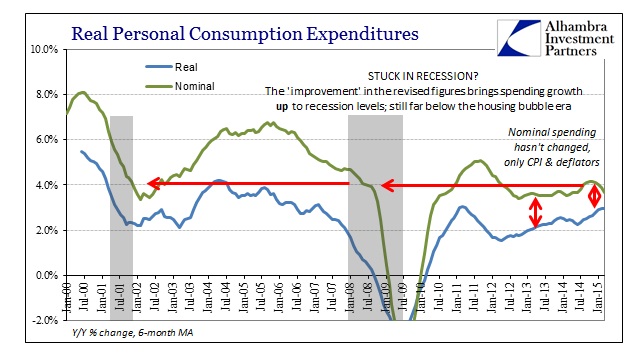 “Inflation” does, again, amount to a serious consideration in economic activity, but by and large the world runs nominally (which is why so many even orthodox economists are herding toward NGDP targeting). The divergence between spending in nominal terms and spending in real terms is revealing in that respect. In the real series, spending looks to be stable and rising until just recently; nominally there was a clear and sharp dropoff back once more to levels that were once troughs in prior recessions. 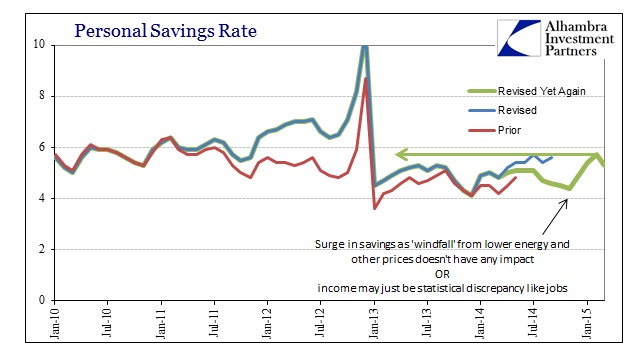 Since there was no income growth (adjusted) in March, and spending levels were calculated to have been slightly better, the savings rate was set lower again. The only way I think that will be a positive factor is if incomes (nominal) are rising with it; only then would it suggest an actual economic rebound. Lower income and lower spending relating to a lower savings rate is not a good signal for future growth as it suggests both a reluctant consumer and one that is closer to the cliff. 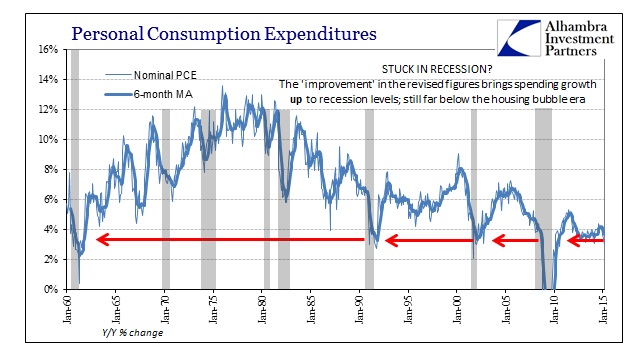 This overriding economic instability is purely evident in the historical trend of PCE spending. No matter how you want to account for “inflation”, economic activity, consumer “demand” as it were, is clearly and painfully stunted. That is the backdrop that QE wished to correct but never did, though there were surely effects in some parts of the economy – thus explaining the instability. It was (they were) an artificial interruption, intermittently, of continued decay and attrition. One of these times, as I mentioned earlier this week, the economy won’t get back up from these waves of volatile gyrations as the pure economic background, the true foundation, remains in a state of devastation. There can be no recovery as long as that continues, and the longer it does the greater the probability of a full break and dislocation.