The German Bund Question In Greek

The German Bund Question In Greek

With Germany’s bond market spooking fixed income all over the world, every rate system has fallen under increasing suspicion. US rates seemed to have bowed to the same ghosts, as the benchmark 10-year treasury rose in yield to an intraday high of around 2.30% last week. That was a sharp increase in only a few days, a trading week, that seemed to be in at least some sympathy to Germany.

While we can’t possibly know yet if there has been a paradigm shift in UST’s, there are a few hints that Germany is Germany and UST is operating under its own constraints. For one, the scales of both moves were not really similar at all. While there is this more “benign” “dollar” environment more recently that might unite trading pressures, there are, again, indications that may be shifting and UST’s for liquidity may be back in play. 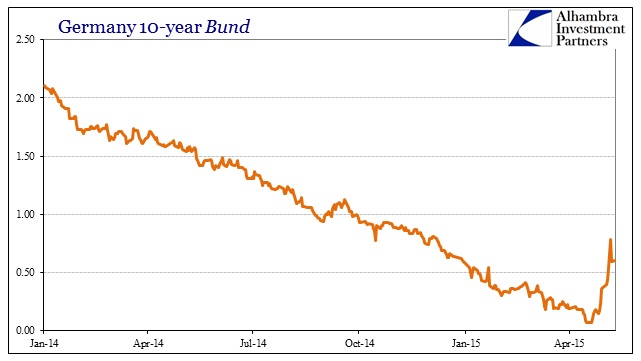 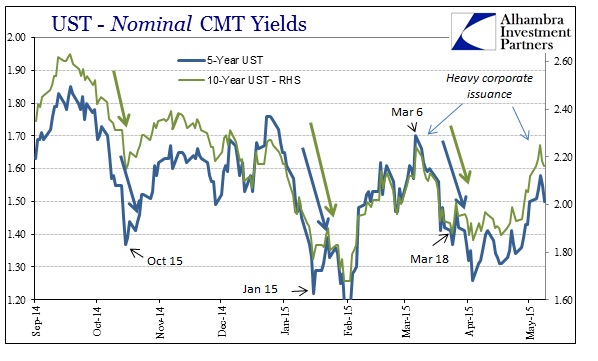 The move in UST vs. bunds is absolutely minor and does not really stand out much from the trading range of the past eight or nine months. In fact, that recent peak last week is very reminiscent of the rise in yields to March 6. That week was notable for its heavy corporate issuance, an intermittent presence which has the effect of taking away dealer liquidity. Last week also contained a heavy corporate calendar, meaning that dealer balance sheet constraints are amplified as to the already-low liquidity environment.

So if there was some selling pressure in UST in sympathy with Germany’s bond realignment, then there was a relatively atrocious liquidity environment with which to absorb that uptick in selling (also very similar to the trading into March 6). I think that is the important point about the state of liquidity in UST and overall, as what used to be a minor depletion in the state of dealer capacity has transformed into a massive powder keg (in either direction). Since the end of the rate-lock period, UST rates have come back down, and at one point Friday morning the 10-year was trading all the way to 2.10%.

Rates have come back up over Friday and so far today (touching 2.20%), volatility that more than suggests very unstable “markets.” 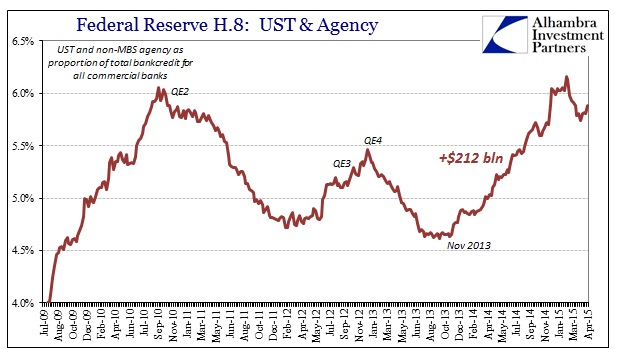 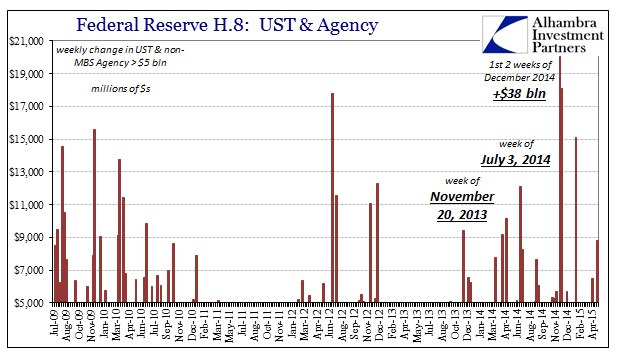 At least as far as the banking side there has been renewed buying interest (through the end of April) which probably has had the effect of keeping the rate “spike” within that prior range. Even with that buying factor, it is clear that liquidity is still depressively low and that is driving all this enormous volatility, a fact obvious on both sides of the Atlantic. 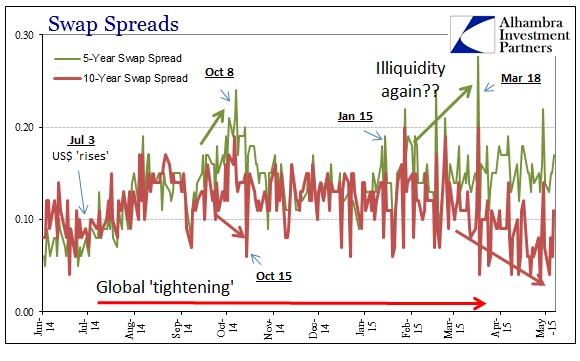 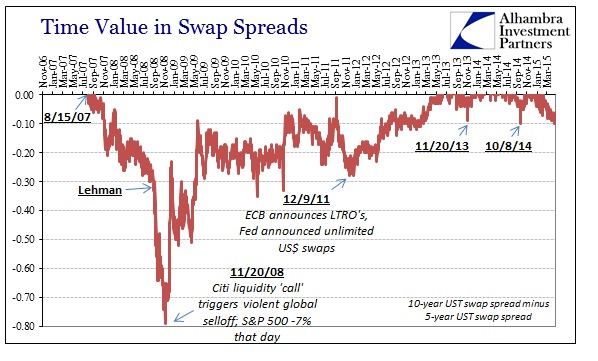 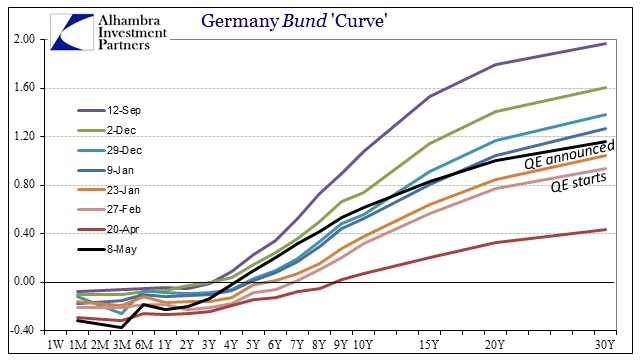 The 30-year bund, for example had fallen to almost 40 bps before shooting up to 1.20% in a matter of a couple of weeks. Whatever the reason for this initial selling trigger (and there is no shortage of candidates) what is lacking is the liquidity with which to contain it more orderly. I think that is the great worry that is unsettling so many bond markets, that if “something” were to occur in one direction or the other there is not much of a systemic impulse to maintain order and containment. Such unchained volatility is further anathema to further liquidity containment.

QE has always brought what seems to be a counterintuitive nature, as the level of “reserves” in any system that tries it will rise but that those “reserves” aren’t the same as functioning liquidity. As it is, the German repo market is as its US$ counterpart, a shell of its former self. And while the talk more recently has been about QE actually working and thus “inflation” working its way back into these yield expectations, the sharp rise in yields in Europe aren’t the gentle guideslope usually reserved for such slower building in changing perception. If anything, the sharp selloff in Germany bonds has the fingerprints of Greece.

The European parties are no closer to a solution to Greece’s problems now than they were three years ago. Despite a double dose of default, the country is no closer to the economic restoration that was promised by so much fiscal recalculation.

In forecasts published on Tuesday, the European Commission predicted the Greek economy would grow 0.5 percent this year, down from the 2.5 percent estimated in February. Adding to the tension, the Financial Times reported that the International Monetary Fund warned it may cut off support to Greece.

“Greek economic conditions are deteriorating,” said Frederik Ducrozet, an economist at Credit Agricole SA’s corporate and investment banking unit in Paris. “It’s negative in terms of the fiscal revenues and the backdrop for the negotiations. But it also provides Greece with some bargaining power when they negotiate the primary surplus for this year and next.”

That was last week as the reality of the missed IMF payment tomorrow is weighed. That was a probability that gained a lot of attention in early April. Peripheral bond yields, once the most “no brainer” trade on the entire face of the planet suddenly began to rise. Spanish bonds, for example, peaked on March 12 and then gained a burst of selling on April 7 when Greece was again at the forefront negotiating how it would negotiate. 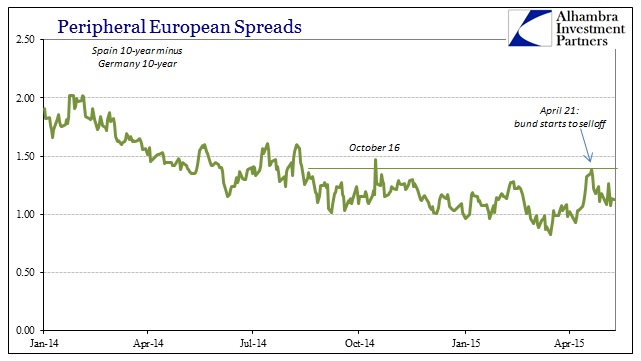 To my eye, it almost appears as if peripheral yields caught up in the rerun of Greece’s impending problems are pulling Germany and the rest up with them. That makes some sense in light of the spread trade that has predominated since Mario Draghi first promised to “do whatever it takes.” A compression in spreads of the periphery to Germany has been almost fully guaranteed, so to see a rather stark reversal in one half of that trade certainly pressured both sides. With the ESP-GER spread (shown above) surging toward April 21 it would seem that eventually something had to give.

Greece’s Finance Minister Yanis Varoufakis said on Sunday that if Athens were to leave the euro zone, there would be an inevitable contagion effect.

German 10-year Bund yields fell 1 basis point to 0.07 percent, having fallen as low as 0.05 percent on Friday. They have fallen 8 basis points in the past week.

“The momentum of the decline in yields in the last week points technically and psychologically to an impending attack on the zero percent level by the 10-year Bund yield,” said Norbert Wuthe, senior analyst at Bayersiche Landesbank.

Again, the periphery had already started moving in tandem with Greek debt and that German bunds rather than “an impending attack on the zero percent level” suddenly reversed as the rest of Europe’s sovereigns were sold and sold hard from there on.

I think that puts both parts of the trends to question; we know that there has been “herding” in German bunds for years, and on the other European sovereigns, and that a very low and troubling liquidity environment would entertain the “herd turning.” I don’t think there is very much doubt about that, but there hasn’t really been much of a compelling explanation provided as to “why” the herd suddenly turned. Again, I don’t think “inflation” and QE “success” would generate such violent selling, though that may just be the low liquidity environment.

Yields on Italian 10-year debt climbed as much as 30 basis points to 1.84 percent, a level last seen on Jan. 12. The 30-year yield surged 35 basis points to 2.90 percent. Trading volume in the first Italian bond future contract rose to the highest since March 18.

Germany’s 10-year yield increased for a sixth-straight day, adding six basis points to 0.52 percent. Borrowing costs are climbing even as the European Central Bank sticks with purchases of 60 billion euros of the region’s debt a month to revive the economy. The quantitative-easing plan sent the yield to a record-low 0.049 percent as recently as April 17.

“It is quite strange that German bund yields are rising so much despite the risk-off sentiment on the back of Greece’s development,” said Gianluca Ziglio, a fixed-income strategist at Sunrise Brokers LLP in London.

Instead, the behavior in yields in Germany is now just as “risk-off”, very much like the behavior in yields in Spain, Italy and Portugal (the resurrection of the PIIGS) which to me suggests Greece is finally, after being ignored for months on end, getting its “due.” In other words, the peripheral bonds began to selloff and then Germany’s joined them in a manner unlike what we saw of 2011 and 2012. It’s not that parts of Europe may be risky, reflected by government yields that are far too artificial, it may be dawning that all of Europe is that way.

The fixed income world, tied together through the eurodollar system, makes that herd repositioning impossible to ignore. With several Greek events coming up, it will be interesting to see if that theory is verified or refuted by the world’s nervous and malfunctioning bond markets. 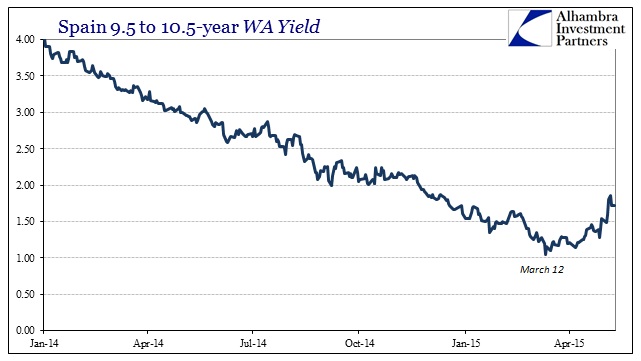