A Ride Through UST Volatility

A Ride Through UST Volatility

In the space of a little more than 2 trading days, the US 10-year treasury went from just a tic or two above 2.10% in yield to a few tics above 2.30% in yield. The front end of that comparison was itself remarkable, as the open for trading Friday (payroll lunacy entailing) was down almost 9 bps in yield from Thursday. Even today, the 10-year swung around in volatility that would make CDS writers jealous for vol premiums alone. While trading ended up about where it began this morning, the yield swung in waves of almost 6 bps HI to LO. 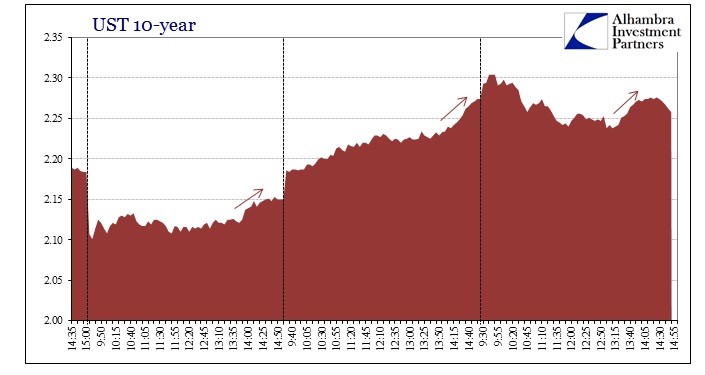 These last few days have also been noteworthy for the 13:30 selloff wave, or close thereabouts, reappearing with some sort of regularity that belies the “most liquid market in the world.” Obviously, there is quite a lack of consensus about what anything, financially speaking, means anymore and undoubtedly that lack of clarity and visibility is making determinations that much harder, but this is far more than bond traders losing their compass. This is not quite the opposite number of October 15, but it is awfully close in at least structure.

Large moves such as these maybe should not be wholly unexpected, as the entire UST curve has been under pressure since about April 27. The 10-year has sold up in yield from 1.94% to 2.30% in that time, which suggests lacking liquidity in both the short and intermediate terms. As I mentioned yesterday, there is German “nervousness” contained within this confusion, but that isn’t, in my opinion, the full explanation.

Funding markets continue to be unsettled and to overlook that in light of UST volatility is unwise. I have spent inordinate time on repo market “irregularity” but that has been much calmer of late – at least in terms of GC rates. There are still many incidences of highly special repo rates while also a curious decline in volume dating back to April 9. 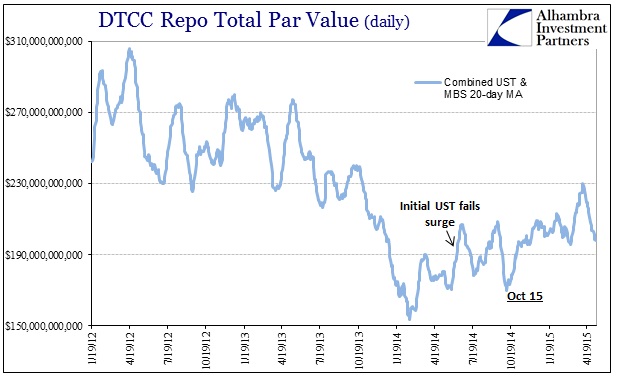 Almost the entire decline has been due to less rolling MBS volume; UST volume remains rather consistent. 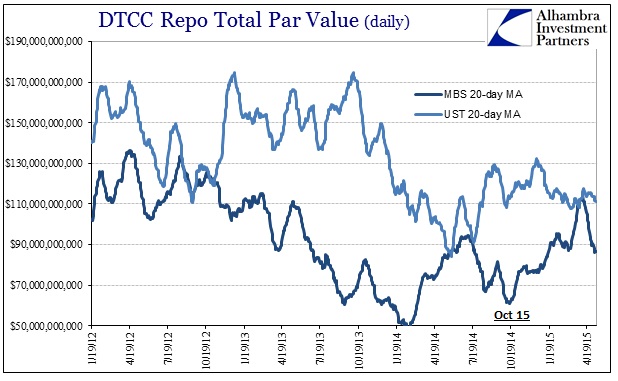 Given that repo rates have been much more unstable in April, but calming again so far in May, there isn’t any clear relationship or correlation that would suggest either a softening demand for MBS (and agency) repo or a lack of supply of “cash.” The behavior of GC rates might suggest an alternation of both, which only complicates matters everywhere else. 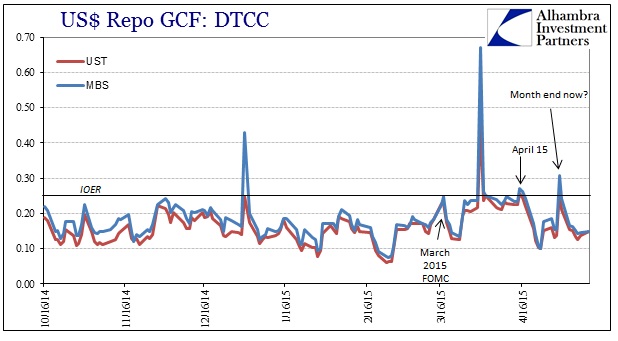 In the unsecured part of the funding markets, insinuations are a little more straightforward – only a little. Clearly, there is at least the hint of more risk being entertained in especially term eurodollars. The spread of 12-month LIBOR to shorter duration rates is quite noticeable, as is the upward drift in the TED spread. What is most interesting about those is how they all attained a “boost” right at December 1 when the credit markets, including and especially UST’s, pulled heavily bearish. 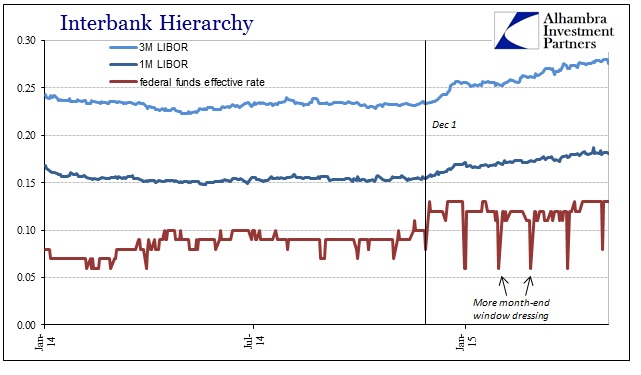 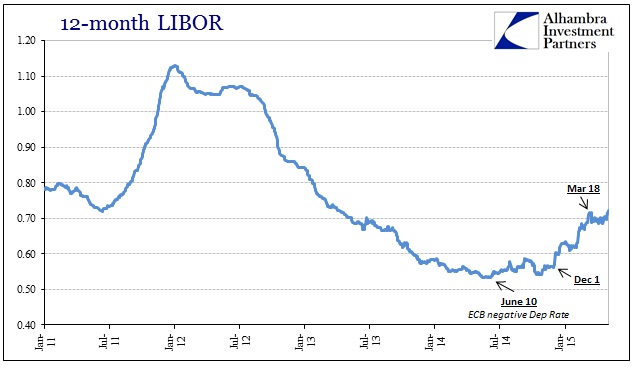 As I said above, to think that there is no relationship between funding markets acting quite precociously and volatility in UST’s is naïve. Even the changing relations of the hidden global “dollar” after March 18 has not much altered the trends here. Repo and unsecured markets (when awake) are pricing greater funding risk, which I believe offers a partial answer about the conspicuous lack of dealer presence at times in credit. The “thing” about volatility is that it will be self-feeding, as an increase in volatility leads to resetting risk calculations and not in anyone’s favor; balance sheets will have to increase the “margin of safety” (VaR and vega, for example) in light of higher expected and perceived volatility conditions.

We can’t ultimately determine the exact cause (what did happen on December 1?) just the ripples from it. What funding markets are suggesting is that those ripples are still bouncing around and creating at least small periods of almost unworkable trading that exacerbates weak points in terms of selling or buying pressures. That is where I think the TED spread might be most relevant and important, as it does not rely on the dead fed funds market (like OIS does) to suggest risk parameters in decomposition.

The 3-month t-bill has been falling in yield while, again, 3-month LIBOR has continued to rise. The convention surrounding TED is that credit risk in financials (since LIBOR is interbank risk and the t-bill is risk-free) continues a steady march upward dating back a year and a half. 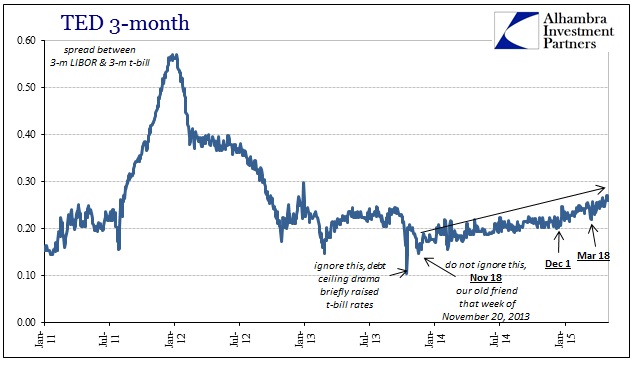 In the context of that inflection in November 2013, that would seem to suggest at least some relation to expectations over the end of QE and then ZIRP itself. But the fact that TED has followed much the same pattern (derived by 3-month LIBOR, after all) as the other market indications cloud the issue – especially as TED has gone upward again even after March 18.

The common explanation for the low liquidity environment that everyone seems to concede now is some Basel or Dodd-Frank narrative. Regulatory changes are certainly having a negative effect, but I don’t believe that is comprehensive. There is a risk reset underway that isn’t completely tied to just what everyone thinks everyone thinks about monetary policy in the US, either. The results are what we see outwardly in volatile market prices, and there is no hint that that trend has been assuaged; if this is reflation then it will be the first time it does not contain a more favorable funding profile.