Continuing on with the inventory theme, industrial production (which does include activities outside the manufacturing sector) continues to falter suggesting that piling inventories are at least beginning their recessionary effects. By every measure, IP is decelerating and doing so at a rate usually observed of the initial stages of dislocation. In the adjusted series, IP has declined for five consecutive months, performing an unmistakable inflection upon the prior trajectory that had been unbroken even through the 2012 slowdown. 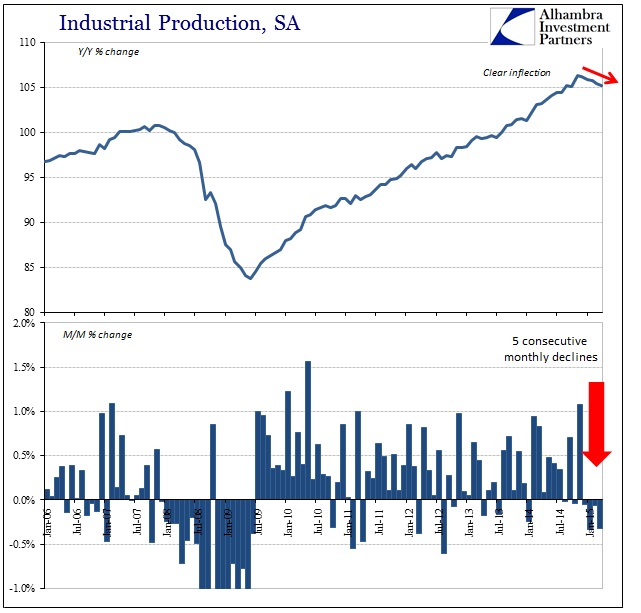 Year-over-year, IP was the slowest growth since the middle of 2013, and second worst of the entire “cycle.” Noticeably absent is any April turnaround which was the mainstream expectation after March disappointed. As with retail sales, wholesale sales and pretty much everything else outside of payrolls, weakness is extending in both calendar (now well-beyond winter) and breadth. 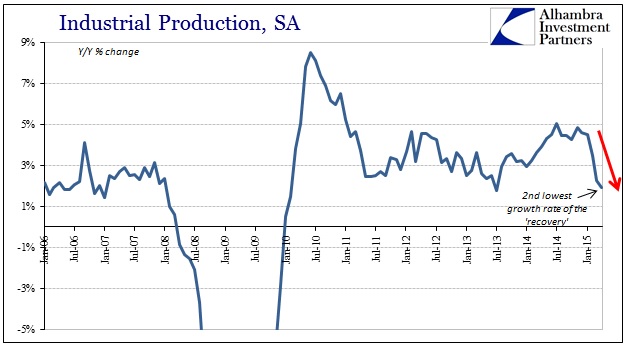 To this point, the energy sector hasn’t been much of a factor, but the most recent results suggest that may not be the case for much longer. The pace of production in crude oil has slowed since June, indicating potentially that the lack of negative pressure from the energy sector may be in the process of turning for the worse. 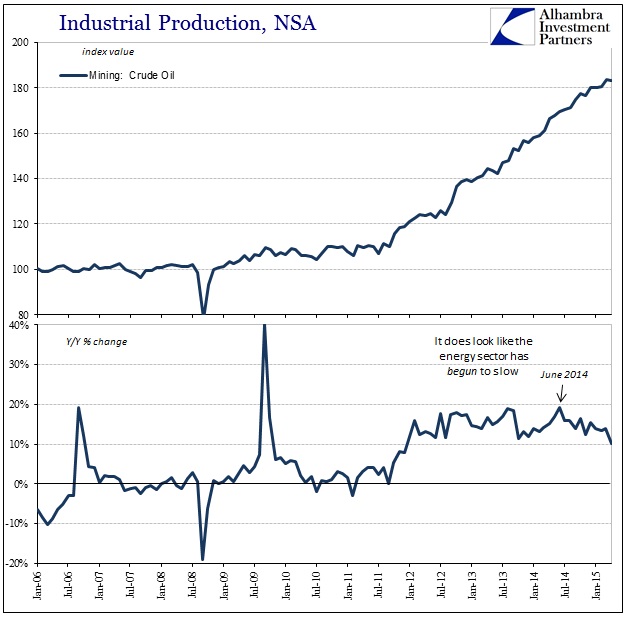 With production already weakening across a broad scale, the energy sector has been one of the only elements keeping it up as far as it has. A seizure here would likely be devastating.

That may just be a matter of time, and the rest of production economy appears to be gearing back for what is surely coming out of the inventory overhang. While the trends in IP itself are not encouraging, it is perhaps capacity utilization that is most alarming. Utilization governs not just productive engagement but also is a major factor in setting future levels of capital expenditures and relative designs on the overall cost structure (including needed labor). 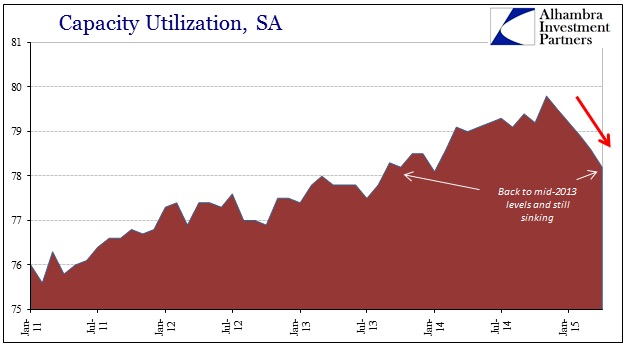 There have been some minor revisions in the series (aren’t there always now?) but the trend is obviously broken. The steady and sharp decline is reminiscent of past recessions at their inceptions.

That already argues decisively that the economy so far in 2015 is much different than the apparent weakness of 2014. Not even the 2012 slowdown had as much of an effect in overall production as what we are seeing right now. While you could make energy concessions in other data points, there is no such thing here; there appears a very broad and organic slowdown that is already much like 2001.

Given that consumers are right now in a recessionary state, the rest of the economy is performing an extremely close facsimile to this point. The bad news is that we still haven’t seen the heaviest of recession forces mustered yet, suggesting the economic imbalances toward the end of 2014 were much larger than they appeared even to a more cynical baseline. If the economy can stumble so badly without any evident “shock” or proximate cause, then what might that say about the potential for any depth? My estimate of cause here is still general attrition rotting out the economic foundation for years, but that makes estimation that much more difficult since there is little precedent for that alone by which to gauge anything.

We are quite rapidly progressing beyond “if” to “how bad”, and these figures, along with the rest this week, are not overly encouraging on that count.