I feel almost obligated at this point to present UST volatility whenever referring to funding markets. Hopefully that “duty” will subside in the near term, but as I suggested yesterday this week is setting up to be much like last week. When I wrote that, however, I didn’t mean to propose a literal copy from week to week, but that is what is actually taking shape as of the close for Tuesday.

The repetition is positively uncanny, right down to the opening and closing levels and even the Tuesday shape, size and end of the Tuesday “bid.” 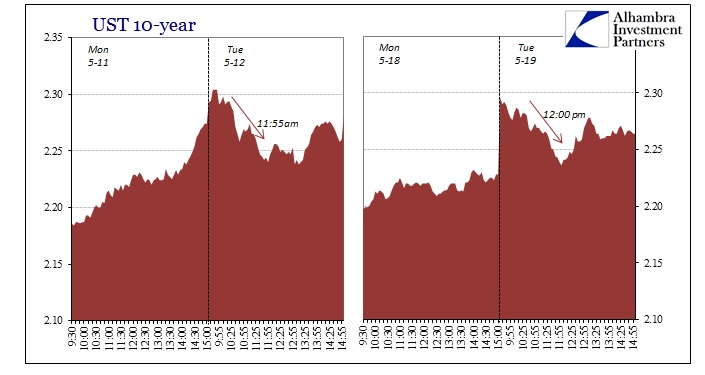 The US treasury market is believed to be the most dense, liquid and participated market the world has ever seen or known. To have such repetition would seemingly disprove that idea, from the ground up. A truly liquid system would seem to function highly random, but like all of finance and the history of market prices there are detectable patterns that result (which destroys the statistical idea of randomness that underpins everything and especially all those worthless DSGE and GARCH models). In other words, there are common, dynamic factors at work here and I continue to think that funding markets provide some insight.

You are taught in all the textbooks that interest rates are determined by a Fisherian structure or hierarchy, and that short-term speculators deal in arbitrage to perform some kind of price transformation of information into that paradigm. In other words, the 10-year yield is based upon a decentralized state of inflation expectations and the assumed settled concept of a “risk-free” return, all aggregated together by these minute-by-minute trades (and now micro-second by micro-second). By essentially stacking premiums in this manner, we can think there is some sense to what might seem to someone with no financial training an otherwise random arrangement of numbers.

But that paradigm itself is self-limiting, and also self-similar. Instead of market participants encoding various fundamental premiums and risk components into a “market” interest rate, what if instead the change in prices at certain times in the day was related to the timing of the repo market closing and matching positions with derivatives? Or, to add another layer of dynamism, doing that same process across two continents and in different currencies? Should it matter in the US treasury market the point at which the European bond market closes? Perhaps as a matter of incorporating a European view of US fundamental factors, but maybe not as a matter of wholesale conditions in Europe unrelated, largely, to the treasury market.

It gets “worse”, however, in that this new stream of information and positioning is used as a basis for the next iteration in price setting (this is essentially the central bank paradox, whereby central banks are interfering in these markets by buying and thus influencing the nth price which will become reflected in the n+1 price but not for fundamental reasons, but then the central motivation of the central bank is that those same n+1 prices and beyond are treated as if they are fundamental in which to validate the “message” the central bank is trying to convey). And really this becomes a problem of market inefficiency, and thus, I think, the repetition.

As if to “prove” this point even more, or really to make this even more complex, repo rates today came in at the lowest level since late February (after rising more recently back above 20 bps).

But my real interest here in today’s version is as yesterday looking at the federal funds market and finding it mostly “dead.” In comparison, however, LIBOR rates have been trending upward really since December 1; it gets steeper the longer the maturity. 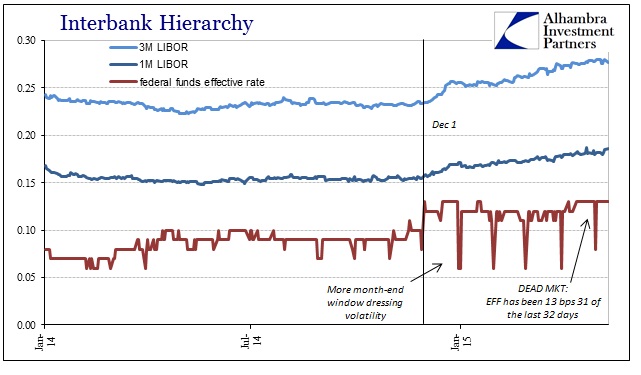 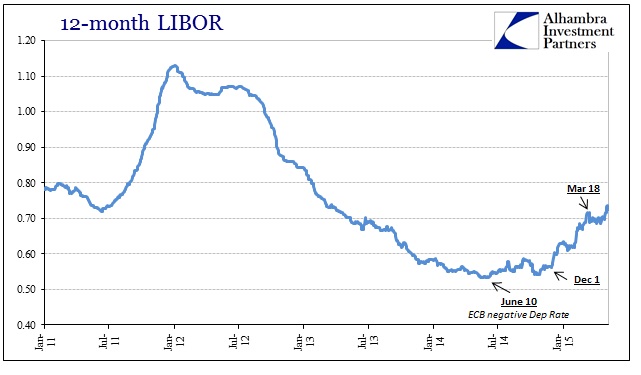 You can make the argument that effective federal funds is overnight (O/N) and that LIBOR deals in time premiums and risks, but basically we are talking about the same realm of unsecured interbank lending. The real difference among them, however, is that LIBOR refers to eurodollar funding whereas federal funds are the domestic side of it. In between used to sit a robust arbitrage from NYC to London, which pre-crisis was enough to create a very stable and highly predictable market hierarchy. 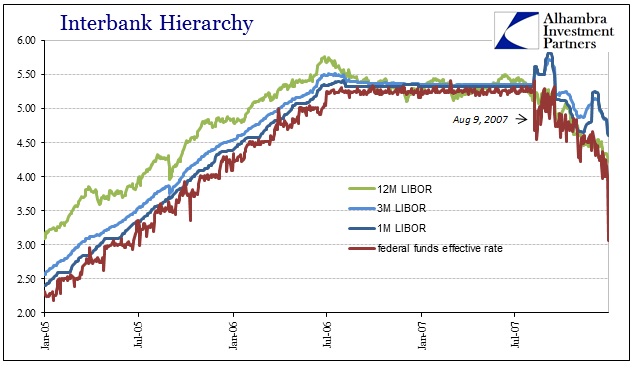 In some ways, then, federal funds and eurodollars were competing systems that were bridged via a legal, accounting distinction where bank operating cos and their subs could exchange liabilities among both places – making a eurdollar pliable enough to be a “dollar.” But with federal funds now essentially a funding void, becoming so due to post-crisis interbank behavior more than favoring secured and collateralized funding arrangements, it raises the issue as to why there might now be a distinction between federal funds (being dead) and eurodollars (being somewhat active). It is another instance of where the pre-crisis hierarchy has been not just broken but likely obliterated.

I think a good part of the answer to that is the “who” that is being shaken most by “dollar” illiquidity more generally. In other words, we know that global “dollar” conditions worsened, and worsened appreciably, from the end of June 2014 until March 18, 2015, but it isn’t enough to make that generic declaration. Given the behavior of the “dollar” as a currency exchange mechanism, we can reasonably assume that it relates more to the eurodollar position than to the domestic funding of large banks (even though, as pre-crisis, it was foreign subs operating in NYC that were mostly accessing federal funds). In the age of QE, the most striking effect, in terms of interbank operation, has been the withdrawal of foreign banks from federal funds and domestic wholesale sourcing.

Once more the idea of a closed system is obliterated by actual conditions outside of academic theory, meaning that there are very close “dollar” ties between the US and Europe (and now Asia), both on the way up and now potentially on the way down. The chief marginal conduits of “dollar” liquidity in even domestic markets are now foreign banks, and even their systemic capacity is seemingly “crowded out” by persistent central bank influence.

That would suggest whatever is left outside of this domestic focus is quite susceptible to essentially eurodollar financial considerations – perhaps offering another compelling explanation as to why the global dollar short is so asymmetric in 2014 compared with even 2013 and prior. And while that may seem to be a better place domestically, I think the opposite interpretation is more appropriate given that the domestic system has been seriously eroded and that the foreign system now having moved away from “eurodollar Europe” to who knows what in its place.

From all that we can again assume that without foreign participation in domestic funding that the more natural absorption of any change in “dollar” demand would be in the foreign eurdollar arena alone (since there are no large bank subs to operate as a liquidity bridge between federal funds and financial institutions without the statutory or operational means to access federal fund themselves). QE has destroyed the ability of these “dollar” markets to operate as distinct systems with a unified structure (thus, no more hierarchy), but in essence the geographic fragmentation that was supposed to have diminished by now may be increasing once more! The Fed has deployed unlimited and largely unconditional dollar swap lines, but those are tools to reach only the inner parts (largest banks) of the global “dollar” system. The same weakness that nearly brought it all down in 2008 is still showing up, namely that “dollar” flow is still a bottleneck just beyond the primary dealers (a list including foreign banks).

In terms of funding markets more recently, I think that has the effect of making minor changes much more of a problem (again the asymmetry) since there are fewer options for absorbing these kinds of “dollar” disruptions more broadly. In other words, when funding gets increasingly “tight” there aren’t as many places to appeal to as an alternative. Repo markets are already problematic on their own (for the same reasons added to collateral strains), leaving whatever volume in unsecured eurodollars as the last last resort – that is why LIBOR is rising persistently as funding markets remain under elevated constraint. It may not be much in terms of actual volume, especially in comparison to pre-crisis levels, but that itself might be even more concerning as, once more, a measure of asymmetrical dangers and problems – the reappearance of the 2007 bottleneck.

The apparent repetition of UST trading can be traced, circumstantially, to the same kinds of funding market problems that have been more apparent dating back to December 1. Or, as it relates to the main ideas of the day, we are seeing the product of QE’s intrusiveness breaking out in surprising fashion. The non-random nature of trading in all these places more than points to the continuation of the central bank paradox.

In short, QE did it.