Nobody really knows what is going to happen as Greece disproves all the narratives about the ECB’s ability to actually fix anything. As with all things monetarism, the attempts of liquidity were really about time rather than dissuading imbalances. But the funny thing about trying to buy time is that it so often removes the very pressure necessary to instill discipline in the first place. In the case of Greece, they defaulted (twice) on their debt, but only a short time later they were back at it issuing billions in a bond market far too eager to oversubscribe as if nothing had ever happened.

Into that forming maelstrom, the euro is taking the heat for the “dollar.” There is certainly that piece of European participation in whatever is taking place of the past week or so, but I think that overstates the “dollar’s” recent issues. From all proxy indications, the “dollar” seems to be tightening again across a broad global front, which suggests far more than Greece and the euro. 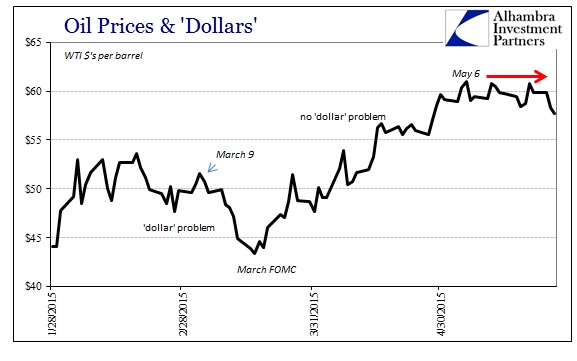 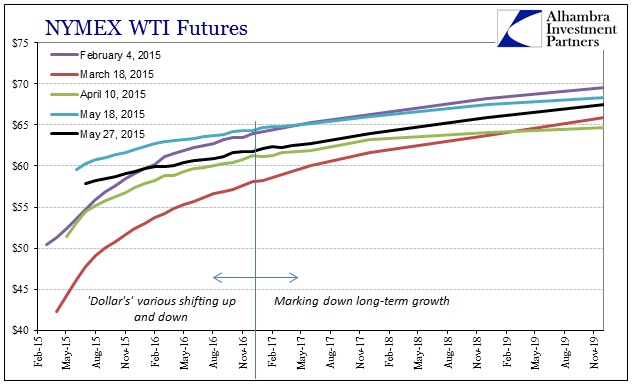 For one, WTI is trading back at a one-month low, having gone sideways right at the day that Janet Yellen decried stock valuations. My reading on the “dollar” has been that Fed overtures earlier in 2015 (stemming from purposeful over-optimism and misdirection of 2014) put monetary policy into a suicide dive. From the perspective of funding and credit markets, the relentless pursuit of “normalcy” during what was clearly gaining economic weakness would only end in disaster. When the SNB relented its euro peg on January 15, that seemed to signal, at least partially, that central bank intentions may be more pliable than outwardly projected; a limit to how much imminent danger normalizing might take. The March 18 FOMC meeting seemingly confirmed that hint, as funding and credit markets perceived the Fed as acknowledging the “slump” and therefore backing away from the suicidal course.

In the two months since then, there have been indications that the perceptions about economic weakness were as bad as perhaps pushing the Fed even as far as a QE5 (worst case), but also including possibilities that monetary policy would at least hold onto ZIRP until whatever weakness had passed (best case). That is why, I think, Yellen’s May 6 intrusion was so universal, as it almost strips monetary policy away from any economic reading. If asset bubbles are the biggest worry (as in China) then the Fed might (attempt to) raise off ZIRP regardless of the depth or duration of weakness – back on the suicidal course (funding market view, not my view). 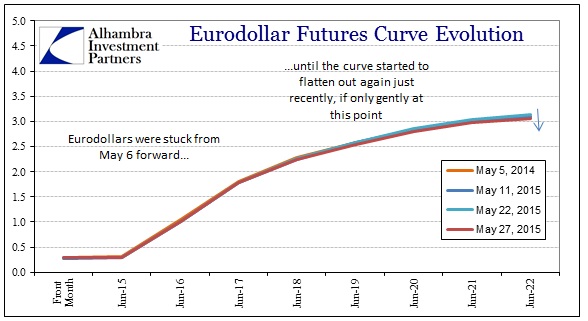 For several weeks, the various “dollar” parts of the wholesale system, stopped by Yellen on May 6, held in a mostly sideways pattern or narrow range. The eurodollar curve, for example, was almost totally constant with only minor variation throughout. In the past week, however, that seems to be shifting as, alongside WTI, the trend is once more onto the “rising dollar.” It may be somewhat imperceptible here, amounting to about 7-8 bps at the outer maturities, but it is much clearer elsewhere, suggesting not just that the “dollar” is a renewed problem but that, again, its renewal is much more than Greece. 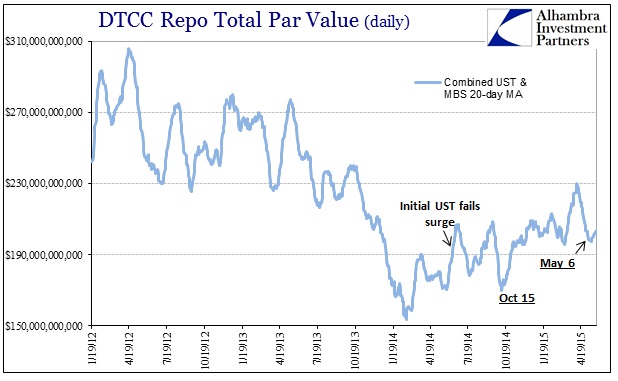 While repo rates are all over the place, repo volume has ticked higher in recent weeks. In my analysis, the increase in repo volume after October 15 suggested funding market problems, as repo liabilities seemed to be behaving as a last resort for marginal funding. If that were true then, it might suggest that the recent increase in volume (particularly MBS) might also suggest this “dollar” tightening. (REMINDER: DTCC volume shown here is not the full extent of the repo market which continues to operate as mostly bespoke, bilateral arrangements hidden from view. That means the DTCC figures are to be taken as a very narrow window and could very well be misleading, which places greater emphasis on corroboration).

Global “dollar” markets also have come under pressure, including both the franc and the real (though missing the yuan, for likely other reasons). 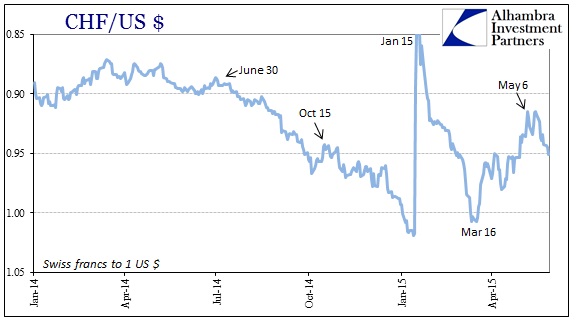 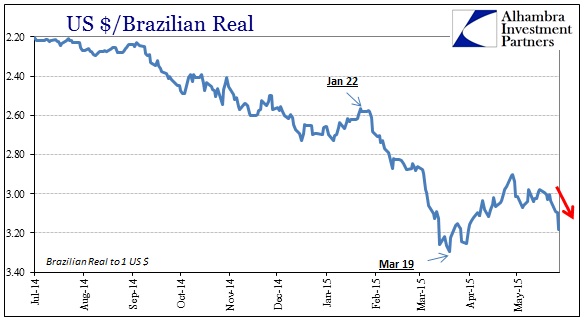 The real has sold off very hard in the past week with it stretching back toward 3.20 to the dollar, nearing the March 18 benchmark for this multi-year devaluation (related to the multi-year “dollar” travails). The franc broke 0.95 this morning, which has been a level consistent with passing into more pressing funding problems.

I wouldn’t yet consider any of these as indicating durable trends as yet, but the suggestions are there. It is certainly of note that the broad front of “dollar” proxies are all moving in the same direction at the same time, so I wouldn’t be surprised if it turns out that way. Nothing ever moves in a straight line, so the ebbs and flows are a given now that the Fed has painted itself into an unbelievably narrow corner. That alone suggests the “dollar” tightening globally as the baseline scenario, meaning the ebbs and flows are variations of that larger trend dating back to November 2013; repeating patterns and all. 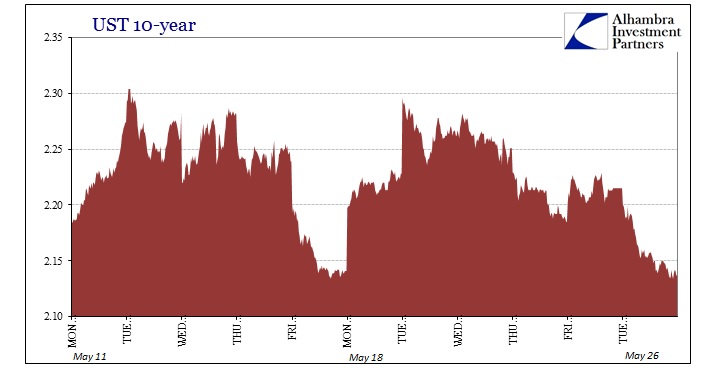