Rather Than All Efforts Aimed At Making Central Banks More Efficient

Rather Than All Efforts Aimed At Making Central Banks More Efficient

Leave it to a self-described socialist to undermine his own argument. Decrying the apparent overabundance of personal hygiene and fashion, presidential candidate Bernie Sanders took to confounding as to how many ways evil capitalism could produce odor-altering products but leave so many so hungry.

You don’t necessarily need a choice of 23 underarm spray deodorants or of 18 different pairs of sneakers when children are hungry in this country. I don’t think the media appreciates the kind of stress that ordinary Americans are working on.

The absurdity of the statement is obvious, while also working on so many levels. To, by government diktat, remove the number of choices of deodorant or sneakers would have the very perverse effect of increasing the number of hungry children. That fact is just lost on those that see redistribution as the answer to anything and everything about “equality.” Many have pointed out, typically on Twitter, that Sander’s thinking is being experimented this very moment in Venezuela, where the poor Venezuelans have little or no choice for deodorant or sneakers (or toilet paper, or actual food) but aren’t swimming in any positive equality apart from shared and now systemic poverty. Instead, they desperately seem to desire the “dollar” as actually negotiable for all these basic needs.

It isn’t sneakers that invite the hungry children to burn into a socialist’s soul, as the target becomes one of frivolity and choice. This is not to say utopia is ever possible, but rather if we have an economic problem in this country Procter & Gamble or Nike is not its author; at least not directly. Some people have been fortunate to find employment while others no longer count for anything that might suggest the “recovery” is at best a sham.  If there is widespread economic disfavor and even an over-representation of hungry children, $1.2 trillion in stock buybacks for 2015 might be more of an appropriate place to start the discussion.

The aspiring redistributionist Sanders would blame that on capitalism without ever figuring that financial redistribution would much better account. If we are basing this all on pure correlation, then the relevant comparison has nothing to do with profit and everything to do with the lack of choice. Socialism is that very fact, limiting choice through the weight of government action, backed by force if needed, in favor of “optimal outcomes.” The rise of regression as an expression of melancholy “science” has made this at least sound plausible, as the technocracy thinks it is possible to engineer equality or something much closer to it.

But properly defining financialism as an element in sympathy to, if not fully of, socialism demonstrates again the primary setback in technocracy. The more the Federal Reserve has tried to intrude financially in order to manage economic progress, the less economic progress seems to result. It was bad enough in the last decade under Greenspan’s housing bubble, but Bernanke took to entirely new extremes all in the name of one goal – limiting choice.

Economists have been successful at one thing and one thing only, in making it seem as if soft central planning by tiny, elite central bank committees was and is consistent with capitalism. In order to maintain that illusion the central banks require the heaviest element of finance possible, which means that choice is removed from the margins of economic growth. I have made this point repeatedly, but it is entirely clear that the Fed and all its counterparts around the world will not accept any form of recovery that doesn’t include its basis and amplification through debt.

The Fed has been saying, all along, that the recovery must either be financial in character or nothing at all. If it isn’t driven by credit and debt then they don’t want it. And so they haven’t got it.

Central banks from Europe to Japan to China, and yes America, have removed all choice, taken away 22 kinds of deodorant, and the results frankly stink (sorry, couldn’t resist). The stench has so permeated that economists themselves have been forced to finally (FINALLY) account for it. Bernanke says in his own defense that QE at least dropped the unemployment rate far faster than anyone thought could happen; and the result of that is the socialist candidate for president in 2016 decries all the poverty!

The rest of the orthodox economists have taken a shine to “secular stagnation”, not the least of which is due to the ease in which that idea provides the intellectual foundation for blaming you. “We” give you the one true answer to economic recovery and nothing else, so it’s all your fault everything has gone awry. Technocracy knows nothing of humility, as it is far too busy simplifying the world into regressions and convincing itself that doing so isn’t meaningful.

The pushback against secular stagnation is being met with the usual shouts of heresy, as the idea of a negative natural rate of interest is actually repugnant to common sense and an actual basis for economic knowledge. Outside of IS-LM regression models, negative rates on anything are a befoulment again of lack of choice. The preponderance of them, including interbank rates and central bank policy positions, only proves that orthodox economists will permit nothing other than redistribution by finance. The patina of capitalism that might remain in their favor has been revealed as nothing more than lip service; Janet Yellen even speaks like a technocrat socialist, barely even taking the disguise anymore.

Via FT Alphaville, James Montier has an interesting piece castigating economists for their “interest rate idolatry”, their belief that central bank-set interest rates matter a lot for the economy and that therefore it is useful, at least conceptually, to think about the “natural” rate of interest that would lead the economy to full employment. There is no evidence that interest rates matter in that way, he says, and economists who talk about natural rates are simply engaged in groupthink.

In particular, he identifies three blind and/or stupid economists leading everyone astray: Janet Yellen, Larry Summers, and yours truly.

Krugman responded by noting what he sees as a good correlation between the federal funds rate and housing starts. In other words, long-lived assets do seem to respond to monetary policy, and thus that market shows that central banking is both effective and market-based. Anyone who doesn’t share that interpretation is stupid (seriously, the blog post is titled “I’m with stupid”).  It is never questioned how intrusive monetary policy is consistent with entire idea of a market in the first place.

Are there times when monetary policy — or at least conventional monetary policy — can’t do the job? Of course. Summers and I have been talking about the zero lower bound since the 1990s — he introduced the argument that the ZLB justifies a positive inflation target, I brought liquidity-trap analysis out of the mists and back into modern economics.

The bottom line here is that there’s plenty of real stupidity in the world; we don’t need to add to the cloud of confusion with a critique of imaginary stupidity.

Cullen Roche, writing at Pragmatic Capitalism, skewers Krugman in every way imaginable. Not only has Krugman doctored his “evidence”, it doesn’t even show what he thinks it does in the first place.

See what was done there? The period in the early 1960’s was removed and so was the period from 2000 on. In other words, out of a 55 year time period Dr. Krugman decided to remove 20 years [SIC] worth of data because it fit his argument better. For those keeping track that’s removing almost 40% of an entire data set just because the data didn’t fit the narrative. And when you add those years back in you get a result that shows a very weak correlation…

None of this is to imply that interest rates don’t matter or that monetary policy doesn’t matter. But I think some economists have a tendency to put a bit too much faith in their theoretical models that are often based on mythical ideas like the Natural Rate of Interest. Unfortunately, instead of responding thoroughly to a well thought out critique, Dr. Krugman decided to offer up a lazy chart blog that didn’t prove his point in the first place.

All that is true, but the larger, theoretical problem remains. The entirety of this argument back and forth never challenges the hardened socialist aspects of soft central planning. The very idea of the natural rate of interest negative or not (even the argument over whether one exists or not) is essentially a battle about financialism. The natural rate of interest as a concept places debt and credit in the first position of economic priorities, and thus means financialism must come at all costs – including economic. The real argument here, after eight years of total economic decimation, is not whether or not monetary policy is effective but rather whether or not monetary policy should be given such immense power in the first place. 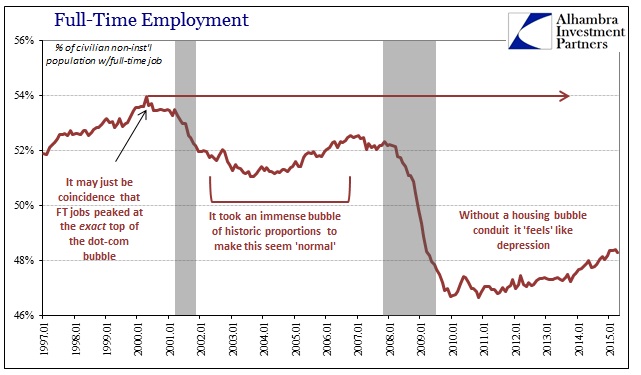 In other words, we should be debating not which policies might be more effective (and to be clear, I am not suggesting that Mr. Roche was doing that, but rather pointing out that most of these kinds of economic arguments take place under orthodox economic terms, and that is the problem as they have completely co-opted the paradigm of what used to be known as capitalism to somehow contain Paul Krugman) but whether or not there should be any policy command whatsoever. It is often presented as a choice between monetary “stimulus” and fiscal “stimulus” but those are just two sides of the same coin (especially since “good” Keynesianism means fiscal redistribution through borrowing and debt).

In order to rectify, the very terms of the debate must shift off the socialist threshold of withholding alternatives. It cannot be that a modern and highly complex economy can be turned on and off solely and completely by debt and nothing else. If that wasn’t made abundantly clear by the ascension of secular stagnation itself, the hostility of economists toward even the idea of exiting the intellectual bubble surely will do so. Capitalism is not a system of how the central bank can more efficiently intrude, yet that is the center of almost all economic debate right now despite what happened in 2008 (which really should have ended this paradigm completely). We see the results all too plainly what happens when government dictation removes 22 kinds of deodorant for “our own good.” 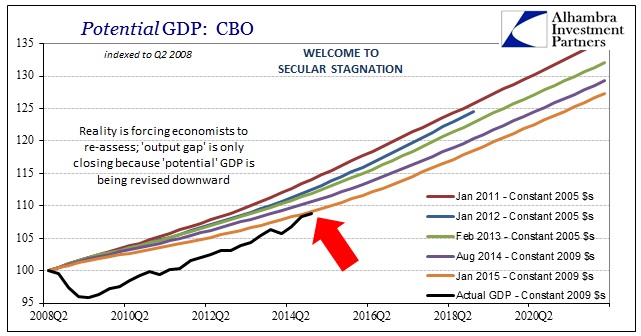