Now The ‘Dollar’ Becomes The Enemy; A Cycle Indication?

Now The ‘Dollar’ Becomes The Enemy; A Cycle Indication?

If there is some small gain to be had from current economic circumstances, it might be a lesson in what the dollar is and what it is not. Just a few months ago the idea of the “strong dollar” was almost ubiquitous, scarcely any shaky economic commentary could be found without mentioning that as the trump to the upside. It didn’t matter if consumers were seemingly stingy, the dollar defied that potential and supposedly meant that even financial markets had finally relented from the “fear bubble.”

Now, a matter of only a few months later, the “strong dollar” has disappeared from service, an apparent apparition that no longer serves to bolster those weakened by crashing reality. As if a switch were flipped, the dollar is now the accursed along with everything else that somehow continues to be classified “unexpected.”

New orders for U.S. factory goods unexpectedly fell in April as demand for transportation equipment and a range of other goods weakened, suggesting that manufacturing remained constrained by a strong dollar and spending cuts in the energy sector…

Manufacturing, which accounts for about 12 percent of the U.S. economy, has been hit by the dollar and lower crude oil prices, which are pressuring the profits of multinational corporations and oil firms.

Factory orders have contracted, on a seasonally-adjusted basis, for eight of the past nine months. On a year-over-year basis, not seasonally adjusted, factory orders collapsed by 6.5%, the sixth consecutive decline and the fourth in a row -4% or worse; unexpected is not a word that comes to mind when describing the recent series. 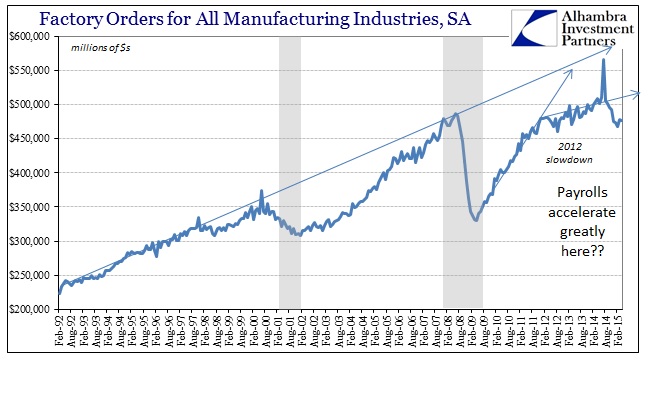 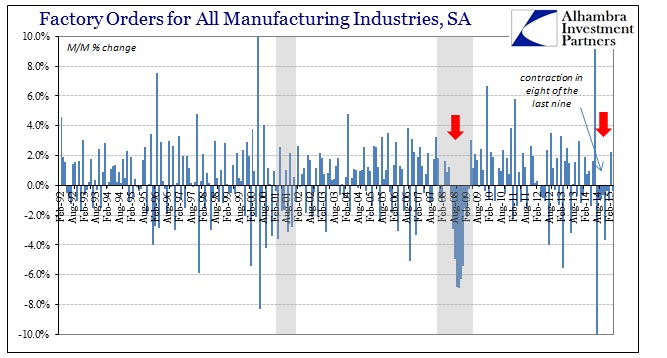 If the economy is not close to recession then factory orders as a data point are now making an uncomfortably close replica. Rather than being an outlier, these results actually fit very well with the atrocious data that has become quite normal, not unexpected, in 2015. Retail sales have been among the worst in the entire series while inventories have grown unrestrained by record amounts for more than a year. Those as a combination mean that factories would eventually get hit with a nasty decline in activity as the supply chain, in reality (more below), seizes up. 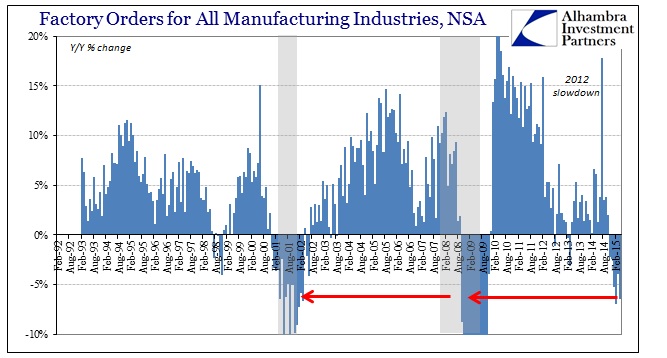 We keep hearing about how this is nothing but a seasonal problem inside government statistics, and that is true but not for the reasons that the mainstream will accept, but the figures presented immediately above contain no seasonal adjustments. The problem here isn’t even limited to just Q1, as the 6-month average for factory orders is almost -5%! That starts with the month of November (which was down 2.2%) and ends with April 2015 (down 6.5%), meaning that half of the decline had nothing to do with even Q1. 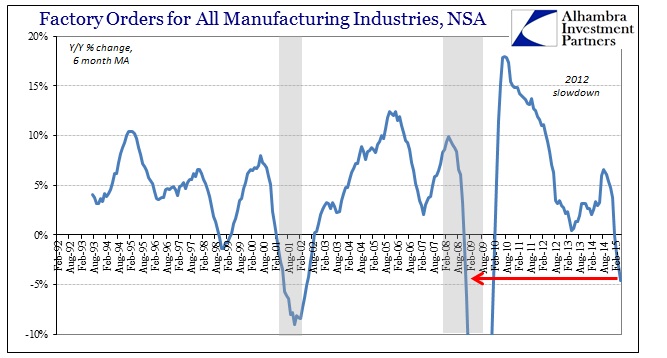 Even in the seasonally-adjusted series, the level of factory orders for April 2015 is below not just April 2014 but April 2013 too. In fact, the current month is not appreciably larger than April 2012, which means the current slump is extremely deep which reduces the possibility of anything other than economic factors setting these trends. In other words, the economy was already in trouble at the 2012 inflection/slowdown, which the “dollar”, properly analyzed, was picking up all the way back then, and has now added a second inflection that is causing a much larger crater than can be explained through benign and often embarrassing excuses. 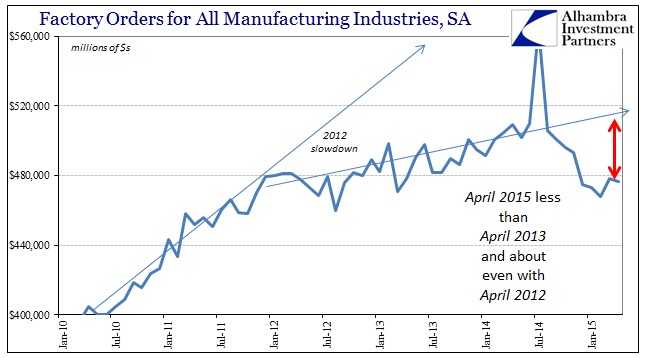 These are observations and results that are now transcending opinion; we can debate whether or not this means actual and outright recession in the overall economy, but it is increasingly hard to make any other case that there isn’t at least a huge economic problem here. Recovery and robust growth are no longer in the picture, so the argument for the rest of this year has already shifted to “how bad.” These are not the kinds of trends and estimates that are in any way consistent with the FOMC’s growth plan and narrative, and certainly look nothing like what those projecting a “strong dollar” were saying when all this negativity started to break out in the first place.

That is why commentary increasingly sounds not just inconsistent and contradictory, but almost as if it were parody. There is still, despite all of this unquestionable weakness on a broad front, this insistence that there is “nothing to see here.” From the same Reuters article quoted above:

But there are signs the downturn could be nearing its end as the dollar rally fades, the supply chain normalizes after being disrupted by a labor dispute at West Coast ports and business spending outside the energy sector picks up.

A report on Monday showed factory activity rising for the first time in seven months in May and a gauge of new orders increasing solidly.

The real supply chain has nothing much to do with the West Coast ports, in terms of business cycle, and everything to do with recessionary retail sales, recessionary wholesale sales and enormous unsold inventory. Those that were gladly hugging the “strong dollar” are now singing the praises of its reversal? That doesn’t exactly suggest a strong grasp on economic understanding in the first place, undermining the confidence that this bit of revisionism is obviously intent on fostering (the real question is why the media simply accepts all this conflicting and incongruous behavior, as the big scoop here is how the Fed not only got QE wrong but everything else beside – dating back a long, long time).

As for the ISM Manufacturing report, which came out Monday, PMI’s are taken to mean what they never truly mean. Yes, the index ticked up in May to 52.8 with the New Orders component up 2.3 to 55.8. So what? In November, the ISM Manufacturing was 58.7 and the New Orders component was up to 66! And those figures told us absolutely nothing about what was just about to happen, meaning that the ISM’s numbers for May most likely tell us nothing about what the rest of the economy will be doing in June and beyond. The most you can get out of that PMI and “sentiment” is that May may not be as bad as April in manufacturing; which, given a starting point of a -6.5% contraction, doesn’t actually hold much meaning in the true big picture.

The “dollar” construed a warning all the way back in 2013 that the economic future was not so bright, and for two years economists have been promising that it would be and using ancient and anachronistic ideas about the dollar (and dollar proxies like gold) to bolster that case. That caution was amplified exponentially starting at the end of June 2014, and these same economists were sure that was a sign the economic gods were turning in their favor. Now there is nothing more than the ISM for them to pull up some positive feelings into what is decisively dismal economic reality that will not relent? The cycle turn may really be close at hand.