Since Q1 GDP was revised lower by almost 1% that meant estimates of productivity were going to be even more out of alignment than they were at the first release. Of course, in a less massaged environment productivity might have preserved some sense if there was less rigidity from the BLS on the employment side. In other words, when “output” estimates were reduced (and they were, by more than GDP) it would make sense that everything would be revised downward in a more cohesive process. Instead, output was reduced significantly, by 1.4%, while total hours worked was marked down by all of 0.1%.

As a result, productivity is revised from a nonsensical -1.9% to an even more skeptical -3.1%. 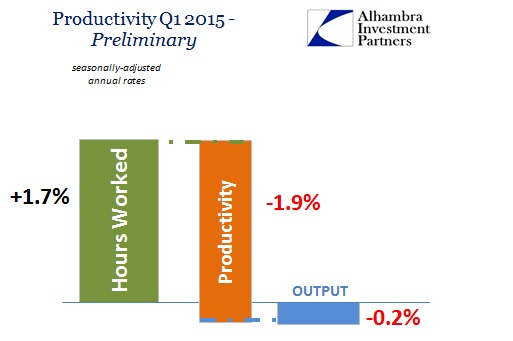 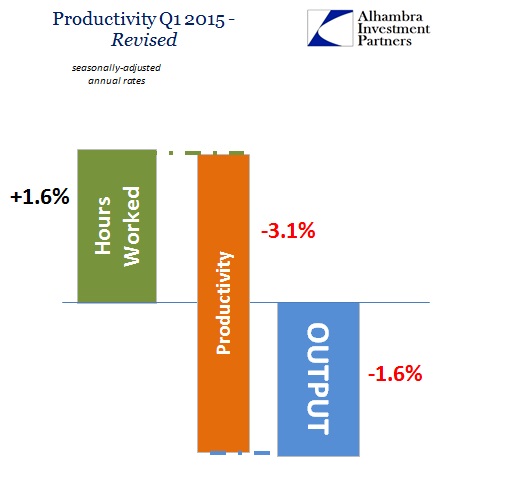 If this was just a one-quarter problem, then it would be easy to dismiss as random variation or expected variance in all these statistics trying to tie together across real economy lags and such. But that is not the case, as productivity, and by extension the estimates for how “expensive” marginal labor is and thus the primary reason businesses hire and fire in the first place, has been seriously “off” for some time. With these latest estimates and revisions, productivity is now -0.7% over the last 5 quarters dating back to last year’s polar vortex. That just doesn’t make any sense in a meaningful context of business operations in the real economy – especially when the BLS is saying that this has been the best run of hiring in decades.

The productivity figures alone show us how the BLS is likely overstating labor gains. Simply substitute a more meaningful level of productivity, such as the average gain during the less robust hiring period of 2003-07, and, by the rigid method of calculation here, total hours gained almost disappear entirely. 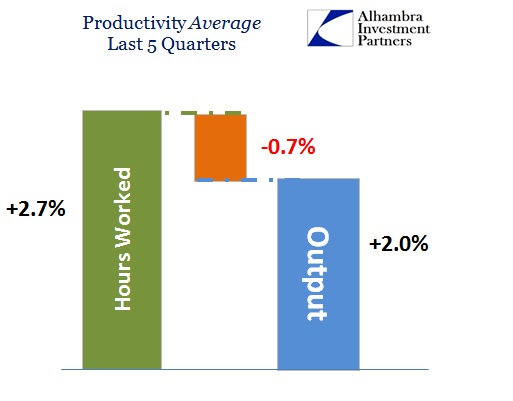 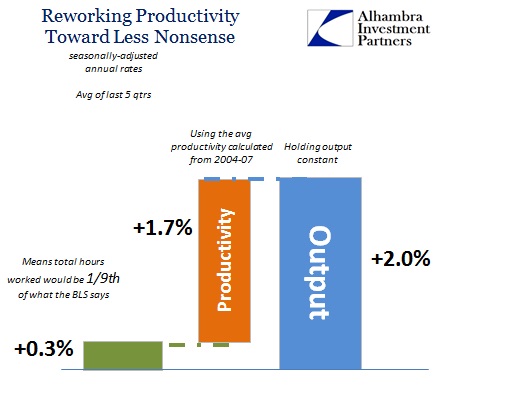 The last time the Establishment Survey was as robust as the past year or so was 1999; then, the average productivity was 3.7%! That number actually makes sense intuitively, since businesses would have good reason to go on a hiring spree. Porting that to the current period, as in the mathematical construction of productivity here, would mean, holding output constant, that total hours in the past five quarters would have been not +2.7% but -1.7%. These numbers literally do not add up.

The deeper you go into the maze of calculations, the more that sentiment grows, not dissipates. The “next step” is to take productivity and turn it into what is called Unit Labor Costs. This is one estimate for how much it “costs” businesses to employ labor, not just in terms of compensation but in terms of what comes out of the capital transformation of that labor input. Where productivity is low or especially negative, unit labor costs are exceedingly high because you pay workers and (assumed) more workers and get less out of them per unit. That is why it makes no intuitive sense for businesses to be hiring rapidly during periods of high unit labor costs, even where revenue growth is robust. 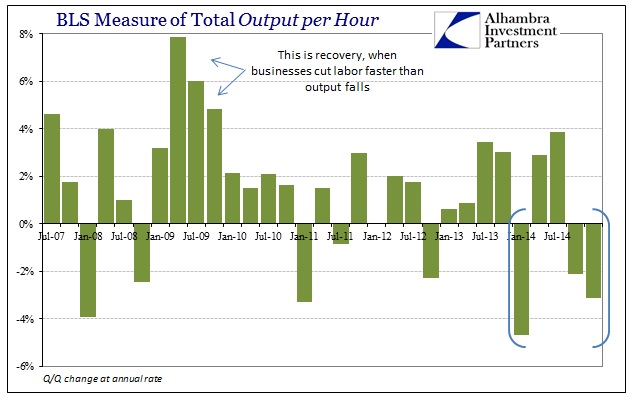 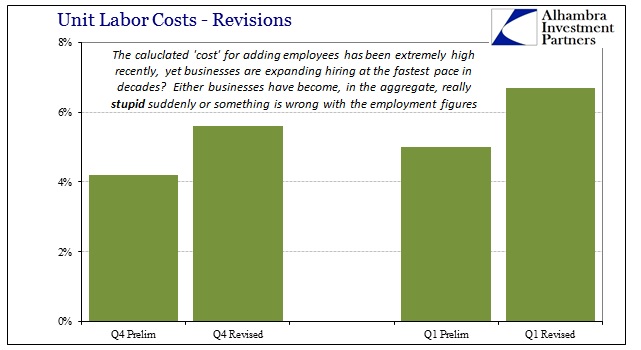 In the past two quarters alone, because the BLS will not budge on their employment estimates, we are supposed to believe that businesses in the US have been falling over themselves to hire when doing so is historically very expensive. With the Q1 revisions to “output” moving downward significantly, unit labor costs in Q1 were revised up from 5% to 6.7%! That makes for two consecutive quarters of about 6%, which is usually what ignites, historically, recessions. 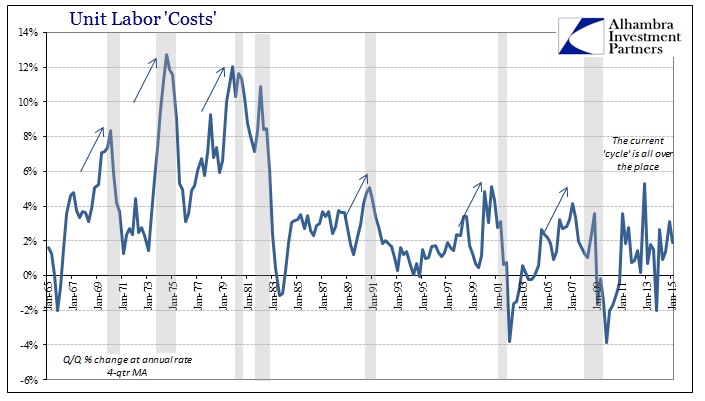 Unit labor costs surge prior to each and every recession, which, again, makes sense, but the problem with this historical comparison is that the calculations more recently no longer conform to any truly identifiable pattern. What used to be fairly stable and at least consistent has turned into a muddle of numbers all over the place. 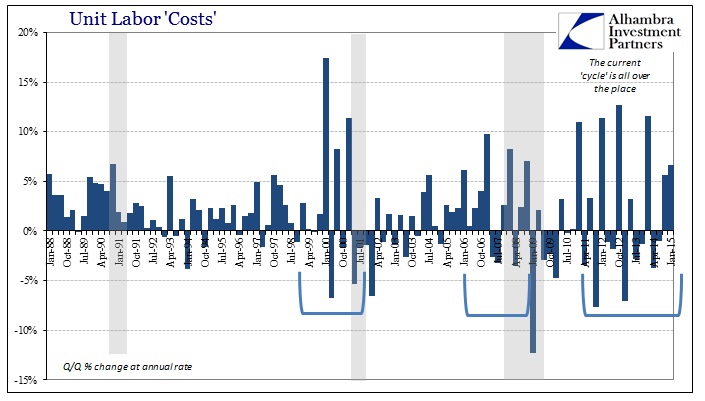 That process appears to have started at the outset of the dot-com recession, gained into the Great Recession and has never abated apart from the typical negative labor costs only in 2009 and Q1 2010 (what recoveries are actually made of; negative and low labor costs at the margins show businesses to hire more and start the recovery process, not in the opposite manner as the BLS has it now). This obvious lack of consistency more than suggests problems in the various statistical pieces flowing into the calculations here.

We are left with two primary interpretations in terms of the macro view (and a slew of mathematical and statistical quiddities that I won’t get into here); either these numbers are correct and US businesses have suddenly lost all ability to profitably to project and conduct business or the BLS is being stubborn in over-estimating labor utilization across-the-board. The third possibility, that output itself should be revised much, much higher I simply reject out of sheer overwhelming evidence to the contrary. The first explanation, dumb businesses, seems almost exhaustively implausible except for the interference of QE and economists’ ridiculous projections. It is possible, how likely is debatable, that businesses have simply rejected what they see of the current environment and ramped up hiring in anticipation of what every single economist the world over told them to. I have said before that I think that is a very real problem and is likely causing economic imbalances in certain places (inventory comes to mind) but I don’t believe that would be sufficient in such a broad labor scope.

No, I think all the evidence continues to point to trend-cycle over-estimation and the BLS refusing to bend toward what is becoming irrefutable reality. There is absolutely nothing to suggest this is the best employment environment in decades, and the fact that the payroll numbers keep making that comparison only has one effect – to so skew “downstream” statistics as to preclude any other interpretation. With Payroll Friday upon us yet again, it is useful to keep this in mind that those payroll estimates not for actual job counts but of chained variations are completely bogus.